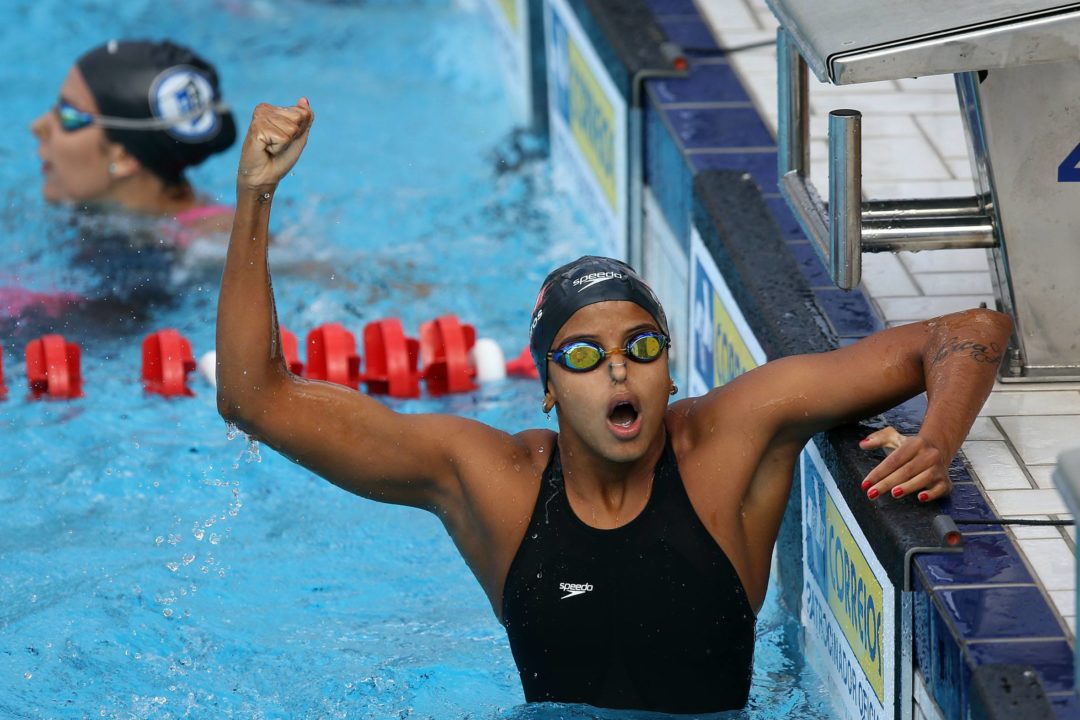 On day 3 of the 2015 Brazil Open (Troféu Daltely Guimarães e Torneio Open 2015) another South American Record has fallen, this time in the form of superstar Etiene Medeiros.

While competing in the women’s 100m freestyle prelims this morning in Palhoca, Medeiros clocked a scorching 54.26 to not only rock the only sub-55 mark of the heats, but to earn herself a shiny new South American Record. Medeiros’ mark cleared the previous record held by another Brazilian, Larissa Oliveira, who scored a time of 54.61 at this same meet last year to sit atop the throne. As such, Medeiros’ new time also scores a Brazilian National Record.

Additionally, her 54.26 clears the FINA “A” cut of 54.43, thus making it very likely that Medeiros just punched her ticket to the 2016 Olympic Games with that monster swim.

Medeiros, who has climbed up the international ranks primarily in the 50m and 100m backstroke events, has proven she is a mighty freestyler as well. She already holds the 50m freestyle South American Record with the 24.55 time she registered in Toronto to earn the silver behind the Bahamas Arianna Vanderpool-Wallace at the 2015 Pan American Games. The 24-year old Medeiros also threw down a massive 53.99 split as part of the Brazilian squad’s 400m freestyle relay at that same meet, contributing in a big way to her nation’s bronze medal, as well as the South American Record in that event as well.

From her Instagram reaction, Medeiros may just be thrilled enough to pass on competing in the finals tonight, as teammate Leonardo De Deus did after obtaining his Olympic cut in prelims. She is slated to compete in the 100m backstroke, 50m freestyle, as well as relays over the course of the Brazil Open.