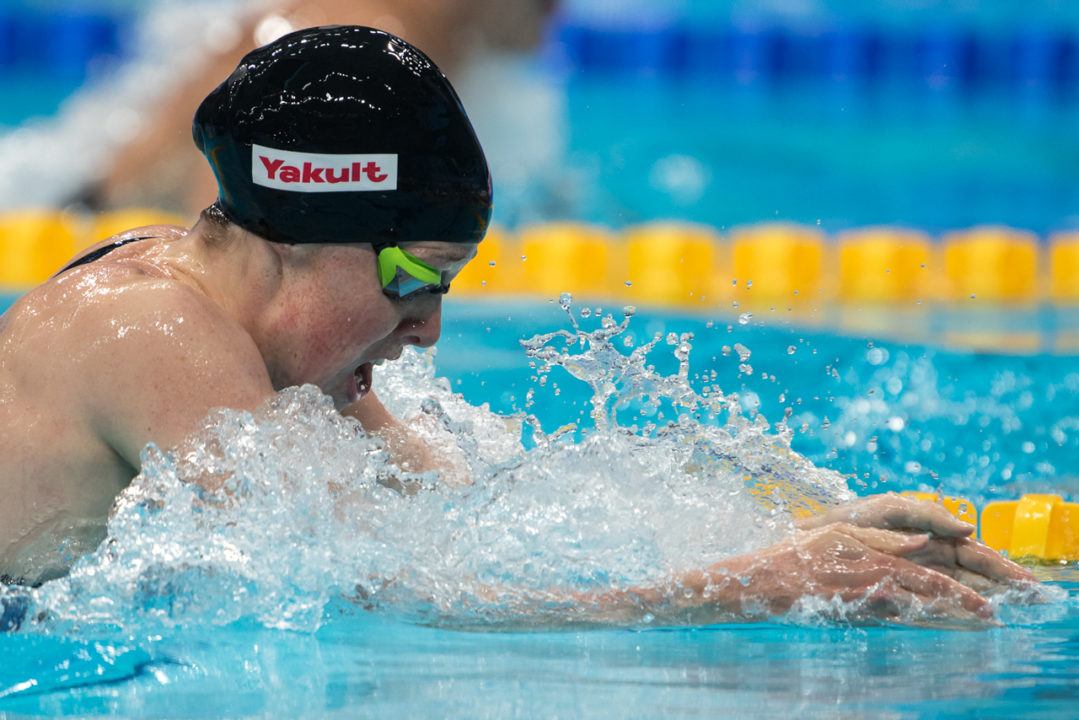 Commonwealth gold and silver medalists in the 400IM, Aimee Willmott and Hannah Miley, were both in action in this event today (pictured: Hannah Miley) Archive photo via Peter Sukenik

The McCullagh International Open Meet kicked off today at the Bangor Aurora Complex in Northern Ireland, the first of 4 days of racing. The meet is laid out as the Olympics will be this summer, with prelims in the evening and finals in the morning. As we reported last month, a number of British athletes will be in action this weekend including Adam Peaty and Duncan Scott, as well as a host of others International names.

The first event of the evening resulted in an Irish Senior Record for the team from ARDS (Amelia Kane, Rebecca Reid, Ellie McKibbin, Victoria Catterson) in the women’s 4x200m freestyle relay. They touched in a time of 8:28.85, knocking down the previous mark of 8:34.21 set by UCD in 2013.

Commonwealth Champion Aimee Willmott leads the field ahead of the women’s 400IM final tomorrow morning after her prelims swim of 4:39.61. Seeded 2nd and 3rd behind her are 16-year-old Katie Shanahan and IM veteran Hannah Miley, who went 4:47.09 and 4:49.71, respectively.

World Championship bronze medalist Luke Greenbank and World University Games bronze medalist Joe Litchfield were both up in the men’s 50m backstroke. A strong start from Litchfield secured the top seed time for him ahead of tomorrow’s semi final with 25.82, while Greenbank goes in 3rd with 26.24. He is followed closely by Rory McEvoy of the National Centre Dublin who touched in 26.30.

In the women’s equivalent, Irish Senior Record holder Danielle Hill qualifies in 28.78 (her record sitting at 27.95), while University of Stirling swimmer Kathleen Dawson leads the strong field with 28.36.

The visiting British swimmers dominated the field in the women’s 200m butterfly, with Commonwealth 2018 champion in this event Alys Thomas leading the way in 2:10.81, 3 seconds off her entry time of 2:07.40. She is followed closely by Loughborough’s Charlotte Atkinson in 2:11.45 and Hannah Miley with 2:18.05, who undertook the gruelling 400IM, 200 fly double this evening.

The final individual event of the evening saw stacked fields in both the men’s and women’s 100m breaststroke events. Siobhan-Marie O’Connor (1:07.48), Molly Renshaw (1:08.37) and Mona McSharry (1:08.48) were the fastest three qualifiers for the women while in the men’s, World Record holder Adam Peaty put on an impressive display as he cruised to touch in 58.90.

I know Peaty’s an absolute machine and doing insane things is just what he does, but 58.9 in the prelims of a tune up meet in mid February is unreal. That would have won US Trials in 2016.

1:07.48 heat swim from Siobhan-Marie O’Connor is a good sign, only went 0.2 seconds quicker than that at trials last year

Not Miss Willmott going two seconds faster in a heat swim in February than she did at the world champs. Swimming can be strange huh. Also, I’ve prematurely decided miss Siobhan is BACK, going to storm to an Olympic medal in 200IM and secure a solid placing in Olympic final for 4×100 and 4x200m freetstyle, all thanks to a fairly good 100m breastroke heat swim here in February. You love to see it

I don’t want to guarantee anything with Siobhan. But, if she stays healthy I think she is in with a fighting chance of getting at least a step closer to her old form.