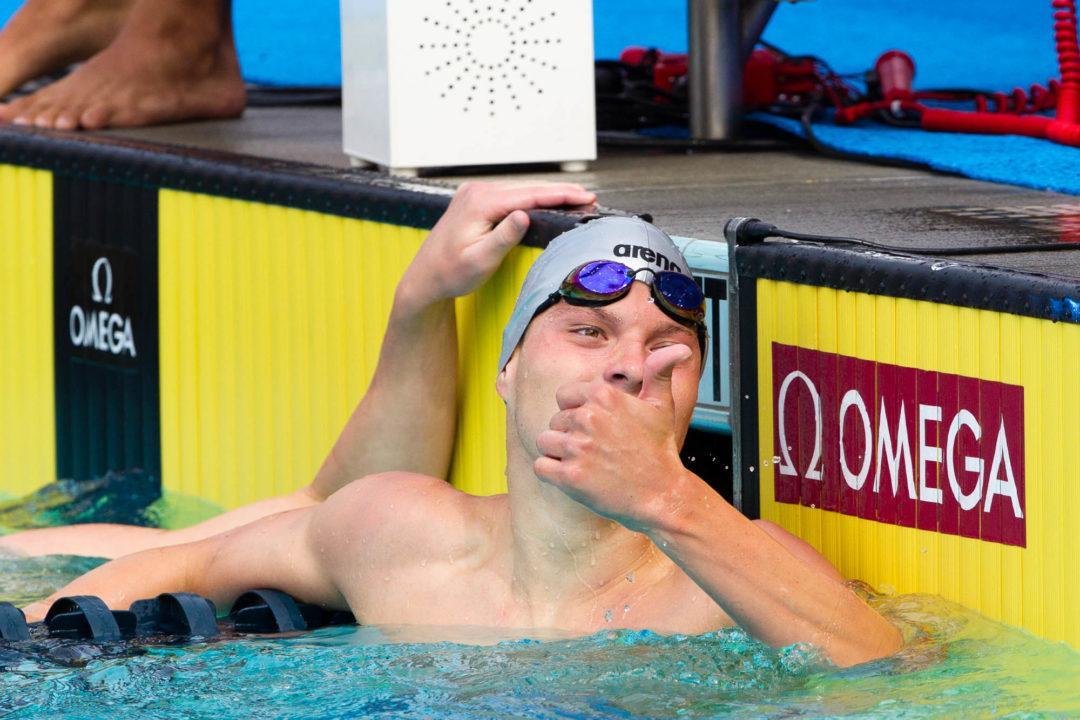 LSU's Matthew Klotz has just broken the deaf world record in the 200 backstroke in prelims at the 2016 U.S. Olympic Trials in Omaha. Current photo via Tim Binning/TheSwimPictures.com

LSU‘s Matthew Klotz has just broken the deaf world record in the 200 backstroke in prelims at the 2016 U.S. Olympic Trials in Omaha.

Klotz swam a 2:02.54, taking off almost a full second from his previous best and the old deaf WR of 2:03.50. That 2:03 was done just under two weeks ago in Baton Rouge, Louisiana at the Tiger Aquatics Summer Classic.

Klotz was very close to qualifying for these Olympic Trials in a third event, the 50 free. His time of 23.46 from the Tiger Aquatics Summer Classic was just .17 from matching the qualifying standard for Omaha.

Once again sensory disability not understood! Yes deaf swimmers are physically on par with their hearing peers however there are a whole range of reasons that they are disadvantaged. Firstly the start of a race, hearing swimmers get to anticipate the start in a race position whilst deaf swimmers have their heads twisted to see the starter, yes they have a start light but this isn’t always on the block so again they start from a disadvantaged position. Add to this the information they miss in every training session, the coaches comments, changes to pace shouted from poolside, cheering on during a race to name but a few. When hearing aids and cochlear implants, are able to be worn ie… Read more »

dude let Matt be….he’s an awesome swimmer and should be allowed to enjoy all the achievements that’s he has earned! go Matt Klotz!!!

From personal experience, being hearing impaired didn’t set me apart from the other swimmers, it just made training much more difficult. I couldn’t hear the coaches, couldn’t hear his recommendations across the pool, can’t hear my teammates and friends, can’t hear my teammates cheer on me, can’t talk to people in the water, can’t hear the water, and on and on. But I always found a way around it and that’s what is important. I’ve swam through high school and D1 college and practically learned everything on my own and from watching youtube videos.

If it made no difference, why has no other deaf swimmer been that fast before? Being deaf affects the start, but it also affects training a lot too. This is a major accomplishment! Great job!

There have been some elite swimmer who were deaf. Jeff Float and Marcus Titus come immediately to mind.

As an official there are specific hand signals that the starting official is required to use to indicate the whistles. Backstroke is particularly complicated with the hand signals because of the number of whistles. If the official is off, then the athlete will step up, get in, place their feet and take their mark at the wrong time. This could affect the timing of the start. For backstroke because the arms are in the way, the athlete must turn their head to watch the starter for these hand signals and the position in general is rather awkward. I believe that the light that flashes, which coincides with the start of the race is just on the deaf athlete’s block. To… Read more »

Maybe you can relate if: Have ever had your ears stopped up during practice. Found it hard to hear what the coach is saying from across the pool. Have the coach give next set while facing away from you. Have been in a swim meet without a strobe light. Have you imagined what it’s like to have your coach give stroke instruction without signing or obviously without your hearing aids? Also Captain Awesome, please note that Matthew wasn’t in a separate classification. He was placed in this meet because of his times, not his hearing loss.The only reason that this is newsworthy is because of the inspiration and motivation now given to deaf/hard of hearing swimmers, families and coaches who… Read more »