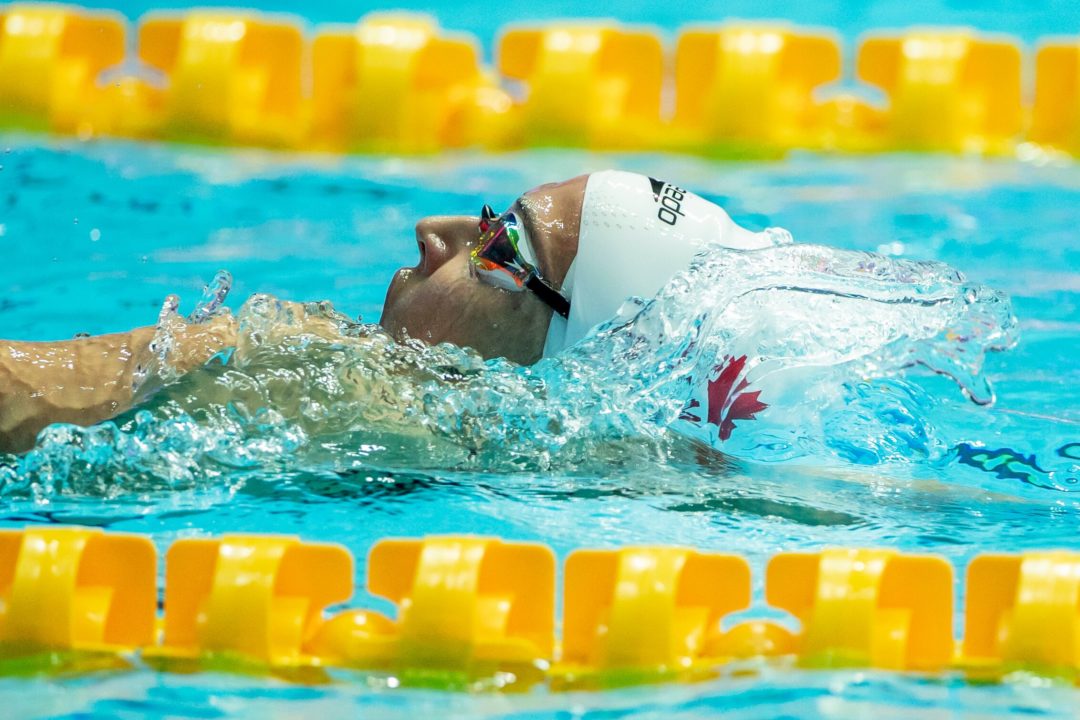 Kylie Masse won bronze in the women's 200 back to give Canada their highest ever medal total in swimming at the World Championships. Current photo via Joseph Kleindl

Olympic medalist Kylie Masse won bronze on day seven of the 2019 World Championships in the 200 back, bringing Canada to a record medal count.

The Canadian contingent have won seven medals with one day of competition remaining, eclipsing their previous record of six set in 1978.

Masse, who successfully defended her title in the 100 back on day three, wins her fourth career LC Worlds medal to tie Penny Oleksiak as the most decorated Canadian female in history. She also ties Sydney Pickrem for most individual medals won by a Canadian female with her third.

“I can’t complain,’’ said Masse. ‘’The time is not as fast as I’ve been but I’m really happy to be on the podium. I’m super happy for Regan and I think it will only push the backstroke field even faster. It definitely motivates me to get back to work and keep improving.’’

The University of Toronto product has been 2:05.9 on three separate occasions in her career, with the 2:05.94 she went at the Canadian Trials in April being her fastest.

Pickrem will have a chance to surpass Masse with a fourth individual medal on the final day in the 400 IM, while Masse will look for a fifth career podium finish in the women’s 400 medley relay.

Put Pickrem on the medley relay! Let’s see them challenge the Aussies

Pickrem on breaststroke might be their best chance, except she also has the 400im that night. That might tire her out.

I was voting for Pickrem too, as she claimed a bronze in the 200m Breast and has been looking good in Gwangju. However, seeing she will likely have the grueling 400im final tmrw night, right before the relay… i think she’ll be competely knackered, so i reckon Kelsey Wog would prob get the swim.

Really impressed with Wog this meet

Lots of great swims from the Canadians!

Look at that, Canada can still survive and thrive without individual medals from Ruck and Oleksiak…………