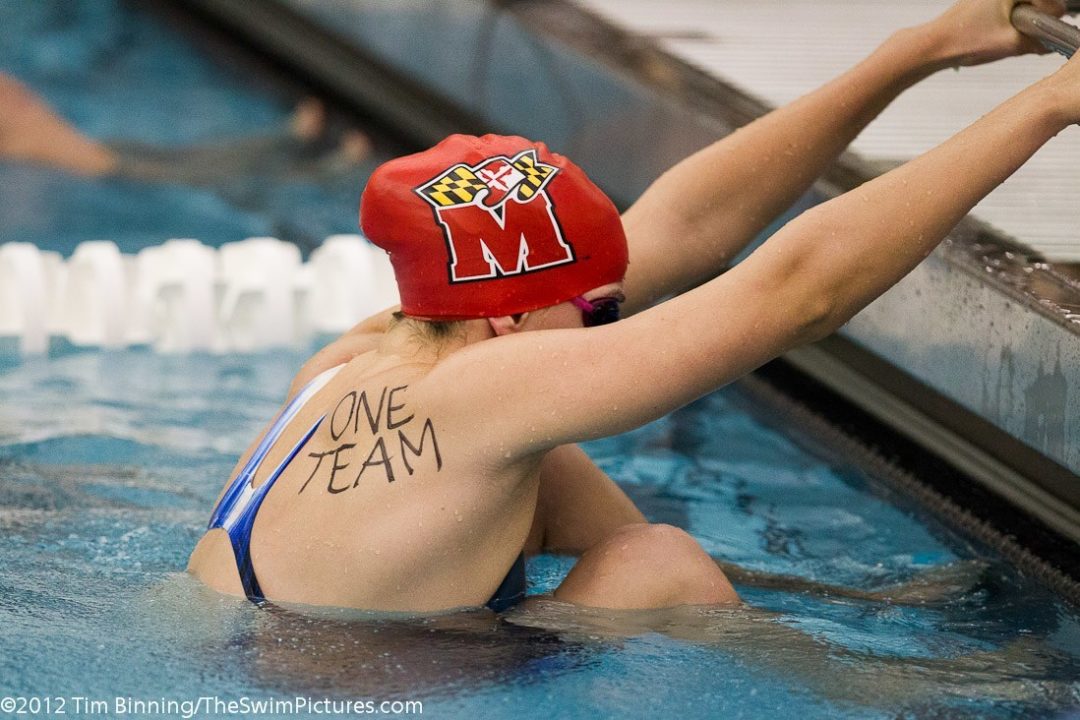 The Washington Post has confirmed that Maryland’s decision to join the Big Ten is final, and Yahoo! Sports’ Pat Forde is reporting that Rutgers is in deep negotiations to join the Big Ten Conference. These are two schools that have recently cut one, or both, of their swimming programs due to budget constraints.

Maryland will make their announcement official at a 3PM press conference on Monday, which can be watched online here.

The bill: $10 million for Rutgers from the Big East, and $50 million for Maryland, the latter of which a number the remaining ACC members voted on last season to prevent more schools from jumping ship.

Maryland, ironically, was one of two schools (along with Florida State) that votedagainstthe fee increase.

Considering that according to the Newark Star-Ledger, Rutgers’ Athletic Department lost $26.8 million in 2010-2011, and even worse that Maryland dropped a whopping 7 varsity squads last year to cover a $4 million deficit, and it will upset fans of both swimming programs to see such huge figures being tossed around.

Maryland, since deciding to drop their men’s and women’s swimming programs, along with women’s water polo and 4 other squads, at the end of the 2011-2012 school year, has been in a tailspin. In 2006, a $50.8 million expansion plan for their Byrd Football Stadium was put into place that initially brought the capacity up to 54,000 seats, and in the next phase is shooting for over 60,000 seats.

Considering that this past weekend, even against a major ranked opponent in Florida State, that decision seems silly, at best, and wreckless, at worst. The 63 luxury boxes that have been added along one side have been viewed by even the Maryland faithful as laughable.

For Rutgers, who would have to pay $20 million if they wanted to leave immediately, or $10 million if they waited 27 months (the former is more likely), the move makes more sense. The NCAA revealed last week that in the new college football playoff format, the Big East has essentially been downgraded to a peer with lower-budget conferences like the Mountain West, Conference USA, and the Sun Belt. It’s much more feasible that the Scarlet Knights will see enough of a financial impact from a new 14-team Big Ten to overcome the $20 million exit fee, even if not immediately.

For Maryland, however, there may be some arrangement with the Big Ten to offset some of the buyout costs, this seems like more of a parallel move. According to ESPN.com’s Krisi Dosh, the per-school average from TV rights deals under the ACC’s new agreement with the Worldwide Leader is $17.1 million, as compared to $20.7 million in the Big Ten. The decision was touted as one that would bring “financial stability” to the program.

Maryland would immediately be badly outnumbered in terms of varsity sports in the Big Ten (though, according to this, that may change). They would be the only member of the conference that doesn’t have a swim team of any sort, with only Illinois and Nebraska not having both men’s and women’s teams.

Considering the breadth of Big Ten events (Ohio State recognizes 37 varsity programs, more than double that of Maryland), these schools will both just not feel right fitting into the Big Ten. The decision has been made now, we just have to hope that somewhere down the road, Maryland is encouraged by their new conference mates to consider re-expanding their sport selections.

Not sure where the 20 million from the Big Ten came from….they paid 25 million to each member school this year. This is a no brainer for Maryland – the Big Ten simply has more money than any other conference right now and by adding the NYC and DC markets that 25 million payout per school will grow.

A less optimistic analysis on football revenue generated by Maryland and Rutgers:

This analysis does not look at basketball revenue which, near term, should be a positive but obviously this move was driven by football or why else would Maryland leave the ACC?

Joining the Big 10 in the long run will be a benefit in terms of $$ into Maryland’s athletic department. That will give them a chance to re-establish swimming and some of the other dropped non-revenue sports. As it is, without the Big 10 they have NO CHANCE.

Maryland’s basketball programs will be initially competitive in the Big 10. Football will be a doormat for a while.

I would bet on U of MD to win this case…they have many well-paid lawyers, far outnumbering the very few U of MD esteemed faculty…..

Let’s not forget that the state of Maryland just voted into effect building casinos in the state & that one of the advertised guises was it would mean more money for schools. The state controller emphasized it would not, directly or indirectly, produce a single dollar for schools. It voted in anyways.

UM has 38K undergrads, while by compare UNC is about 27K, UVa has less than 15K, Wake Forest less than 10K, and Duke less than 7K. How many non-revenue sports have UNC, UVa, Wake and Duke shuttered in the recent decade? Zero. And several of those schools have added non-revenue varsity sports to both men’s and women’s.

UM can’t balance their books no matter what, but don’t blame… Read more »

It will be interesting to see if the $50M exit fee holds up. It is now abundantly clear why Loh voted against it. One of the points he raised, probably after discussing Maryland’s potential exit with University counsel, was that the exit fee seemed punitive and exorbitant and that it was not tied to the actual harm that the conference would suffer if a member departed. Couldn’t prep a client better! That is the argument the argument Maryland will want to make contending that the ACC’s exit fee is an untenable liquidated damages clause. On the other hand, I am sure that Commissioner Swofford’s counsel will have all kinds of fun throwing around the yearly revenue numbers from the Big10… Read more »

Is there a jurisdiction other than Federal Court for this? It could not possibly land in Maryland State Court.

0
0
Reply
Wahooswimfan
Reply to  All wet

Mandatory and exclusive consent to North Carolina jurisdiction, in Greensboro. That’s enforcable. So will the $50 M exit fee. The ACC can just recoup over half simply by immediate offset against UMD’s revenue share for this year (unpaid portion of the $17M) and next (at least $17M); so not only would UMD have to spend dollars on lawyers in a NC court to fight the fee, they will also be without revenue for the 2 years before BIG revenue begins to come in. Think they have budget problems now – just see what the next 2 years bring. And after 2 years of even tighter budgets, UMD’s recruiting in sports – especially other tan football will be so far behind… Read more »

Thanks for that feedback. North Carolina jurisdiction = strike one against UM. Offsets of $34 million withheld this year and next = strike two against UM.

But UM will be UM and fight to the bloody death on this thinking what Loh mused will be worth a legal twirl. I doubt it will work. If Kevin Plank is not coming in fast with very big $$$$ UM will struggle to field a club frisbee golf team in two years. If so many student athletes were not badly affected by this whole mess it would be just as well to see Loh, Plank and the rest of the egos at large eat crow next.

0
0
Reply
All wet
Reply to  Wahooswimfan

Poetic justice. Maryland just loves taking to the court in North Carolina. Maryland always complained about the Carolina-centric focus of the ACC,, complained about the ACC tournament regularly being played in Greensboro, etc. Come to think of it, that may be the one area in which Maryland led the conference — complaining.

U of MD is financially-distressed and scrambling to cover the financial burden of a grossly overbuilt “revenue sports” apparatus. Dream on if you think they will reinstate swimming. Its an overrated commuter school anyway, and will be the door-mat of the Big Ten. U of MD former swimmers ended up better-off because of their mismanagement. At least the Big Ten made out, getting into another large media market with their well-run athletic machines.

An overrated commuter school really? It’s a great school that is rising in the ranks to join other top public schools like Michigan and Virginia

No, it truly is a overrated commuter school, although its also building quite an online degree mill. The up and coming school in the DC region is George Mason.

UM College Park is 23% out of state, which is likely skewed high because of a larger % from out of state in the graduate schools which are huge. While UM does not merit teasing (the engineering, medical and life sciences graduate programs are at least regional class), but the reality is UM is not in the same strata as the other UM (Michigan) or UVa…those two are ostensibly public Ivy caliber schools straight to the ground.

The permanent issue for UM is horrible administration at the university and athletic department levels. I think Loh and the AD each have reached ground zero in terms of credibility or trust. Ohio State is the largest revenue $$$ athletic department, about $130… Read more »

SI.com reports that Maryland will make $100million more dollars by 2020 with this move. If so, there’s more than enough to go around…

Remember when Big Ten schools used to be in the Midwest? Remember when Big East schools used to be in the East? At least the Pac 12 is somewhat geographically coherent with all the schools in the west but I half expect Pitt and/or Connecticut to join the Pac12 at some point. At least the conference keeps their numbers straight. Numbers and Geography don’t matter. Only $ matters.