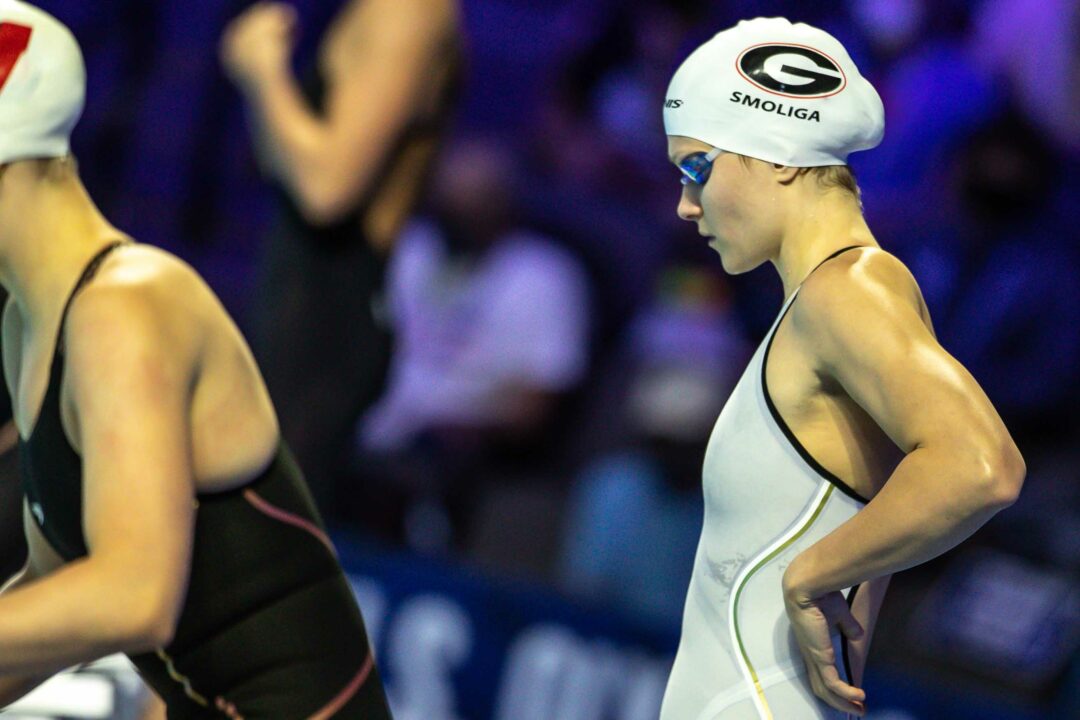 There were multiple big names absent from the heats of the women’s 200 freestyle this morning, including Simone Manuel, Olivia Smoliga, Catie DeLoof. Current photo via Jack Spitser/Spitser Photography

Both Manuel and Smoliga were tentative entries in the event, as they both have additional events to focus on where they’re favorites to make the team. However, they were seeded 2nd and 5th, respectively.

Manuel, meanwhile, does not have any additional events tonight. However, she has the 100 freestyle and 50 freestyle later in the meet, both of the events she won the 2019 World Championship titles in. Going into both events, Manuel is the heavy favorite. However, fast-rising teenagers Torri Huske and Claire Curzan have made big strides in the event and could challenge her.

Assuming Manuel and Smoliga make the team in other events, they may be in the position for coaches’ consideration spots on the 4×200 freestyle relay. Manuel holds the 3rd fastest time amongst Americans this Olympic cycle with her personal best of 1:56.09 that she set leading off the 4×200 freestyle relay at the 2019 World Championships. Smoliga came into the meet with a best time of 1:57.04, which she just set at last month’s Atlanta Classic. Given that she swam that time un-tapered, Smoliga has room left to possibly improve her time in Tokyo.

DeLoof is also in the 100 backstroke final, and her coaches feel that it is better for her to conserve her energy for the race. Plus, DeLoof also has the 100 freestyle later in the week, which is arguably her best event, as she represented the US at the 2019 World University Games as a member of the 4×100 freestyle relay. DeLoof was originally seeded 28th in the event.

She is not a heavy favorite, especially in the 50. Huske and Curzan could beat her. Huske was absolutely flying on the first 50 last night, her speed is on point.

If she’s not firing on all cylinders, I don’t think she’ll make it in the 50 and individual 100. The margin between her and the rest of the field is much smaller now than it has been the past few years.

Just… why? At least swim Prelims to show you still have a 200FR in you, ESPECIALLY if you have no other events today and just 50s and 100s for the rest of the meet. I feel like this sets a very strange precedent, as we’re now not only seeing someone like Phelps no-show for a potential relay spot (definitely more understandable, especially given the breadth of his other events at trials), but a whole series of swimmers under the assumption that something like their 100BK will give them a 200FR spot when there wasn’t even an international championships last year to assess merit.

Appreciate you sharing your thinking in how you personally would approach this meet line-up… We’ve entered a new era of athlete that puts their needs, experience, and perspectives first in order to optimize their success. Given this is an unprecedented quinquennial rather than quadrennial, we can all leave space for them to make the best decisions for themselves. It’s an individual sport after all. They both also recognize the risk of leaving decisions in the hands of coaches rather than swimming their way onto a relay. It’s a risk they are clearly good with taking. Furthermore, there is more than the trials finish that determines who gets a relay spot… And yes, the capability of managing the intensity of the… Read more »

Perhaps this might make it easier for Forde, who is currently the 7th qualifier to make the top six, if Simone is not in the mix. Team work ?

Simone Manuel could have swum the heats and semis only to scratch the final. That was the exact course of action Regan Smith took with the women’s 100 meter butterfly.

Helps that the head Olympic coach is her coach, probably.

“they may be in the position for coaches’ consideration spots on the 4×200 freestyle relay.”

I wonder if Greg advised Simone to scratch or if Simone did this on her own?

I feel like a decision like that was a mutual one. Simone is an absolute stud – the field isn’t as stacked as it could be so they both might be taking their chances.

She hasn’t swum the 200 in two years I don’t think? Maybe something physical going on? Maybe she just wants to focus on 50-100 like other sprinters?