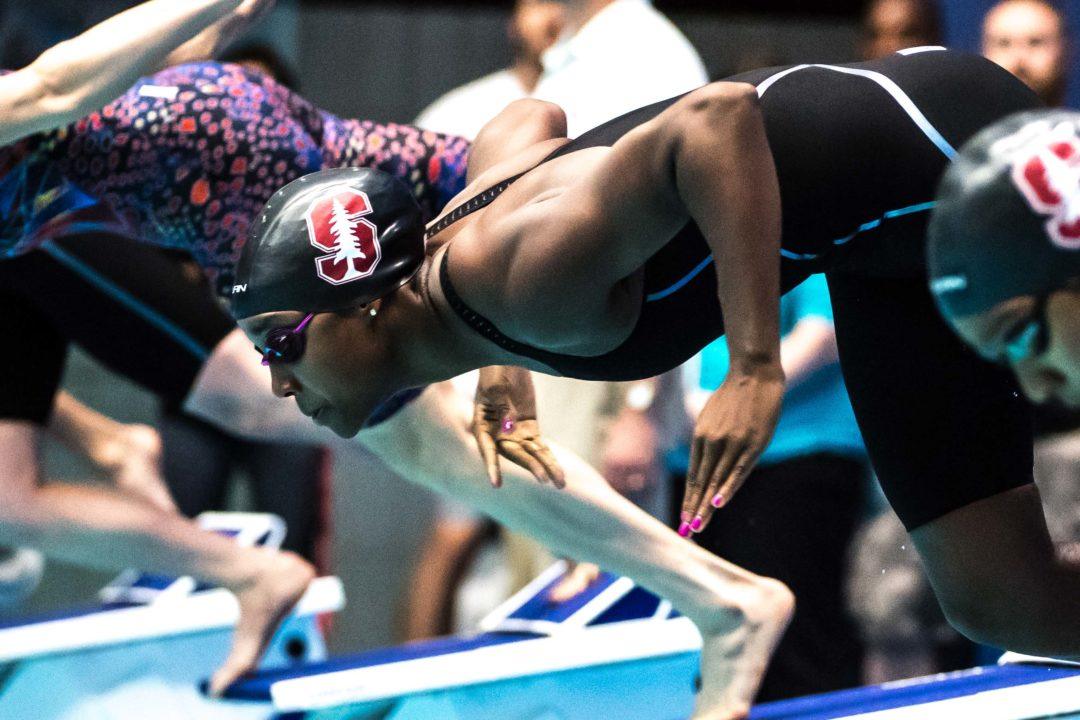 Manuel finished a half a second ahead of the field, winning the race in 24.27 while fellow Olympic sprinter Abbey Weitzeil (24.74) took 2nd. Current photo via Mike Lewis/Ola Vista Photography

American sprint phenom Simone Manuel continues to impress with her performance on the final night of competition at the 2017 U.S. Nationals/World Championships Trials. Manuel finished a half a second ahead of the field, winning the race in 24.27 while fellow Olympic sprinter Abbey Weitzeil (24.74) took 2nd.

Top 10 American Performances of All Time:

Sjöström just popped another 23.85 in the swedish championships. In cold and windy conditions.

Well, Abbey Weitzeil still has a chance to be the part of golden and maybe WR American relay. She has three weeks to set things straight ( 2 sec improvement of her in-season performance 🙂 ).
Lia Neal is untouchable and most likely will anchor the relay as she did at NCAA. But the fourth leg is quite open: Worrell, Smoliga and Ledecky. Who knows if Ledecky be that amazingly fast as she was in Rio. Plus she will have 400 final just have an hour prior the relay race. Worrell’s and Smoliga’s personal bests are quite achievable.
If nothing pathologically irreversible has happened to Abbey during this college season then she has chance to come back.
… Read more »

Abbey didn’t qualify for the relay. No way they put a 55 on the relay in prelims or finals in any case.

Who believed that Ledecky who didn’t make relay will anchor the best ever American relay?
Who could possibly think that Maya DiRado who didn’t even compete at 200 free would be a gold medal saver?
Sure, 55 is not the time to replace 43.99 of Kelsi Worrell. And the only condition she can be chosen if she proves that she can reliably perform under 43.5. She was able to do it last year making second fastest ever split of 52.5.
Can she do it this year? I have no reliable information of what’s going on with her. But she made on team. And she has three weeks of rest and tapering if she hasn’t done it already.

Maya was swimming great in Rio, the prelim times by all the morning swimmers but Allison were too high, so they put her. She delivered. Ledecky wasn’t fully tapered at Trials. She was in Rio, and had a bigger time drop in there, she got put in the relay, and she delivered. The only way, Weitzeil gets on the relay is if she improves. Relay spots are not charity.

Personally I think the final will be Comerford, Manuel, Ledecky, and Neal. Prelims Worrel, Smoliga, Neal and one open spot that would go to anyone performing well during training camp/Budapest. It could be Weitzeil, Gibson, Baker.

24.2 is insanely impressive, but i don’t think Simone will get pass Sjostrom in Budapest. Currently Sjostrom is about .4 of a second ahead of Simone, and to see how big that is in a 50 go watch the kazan 1015 final and see how far Manaudou is ahead of Adrian. Its a huge gap.

No one thought Simone would get past C1,C2, and Sjostrom in Rio. You get a lane you got a chance. ?

C1 had mentally imploded; C2 went into Rio with a bung shoulder and hadn’t swum a fast 50 since Kazan so was never going to be a medal factor. SS’s race program caught up with her.

This year; C1 won’t be there, C2 unlikely to make 50final as shoulder issues not fixed. SS has a much reduced race schedule and isn’t likely to be out of fuel by the time 50free comes around.

Unless SS get ill or injured between now and Budapest; she’s very unlikely to be beaten over either 50 or 100 free or fly. Re 50 free, Manuel COULD very well contend for a minor medal but Blume has been swimming 24 v lows and Kromowidjojo may… Read more »