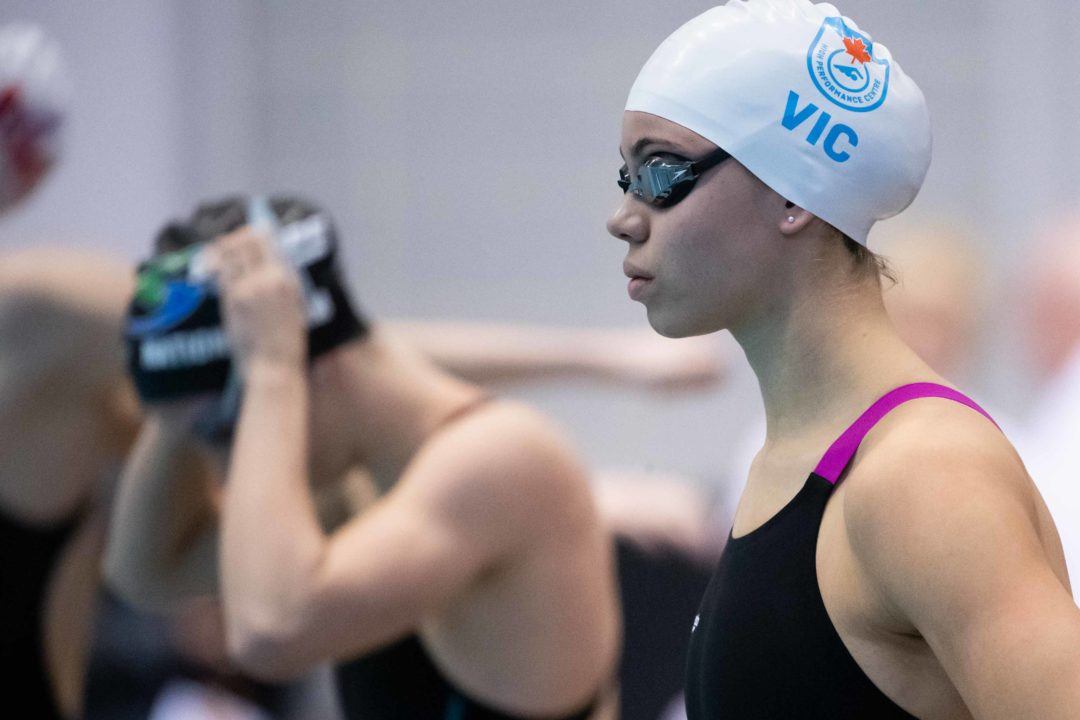 Canada's Jade Hannah, along with DART Swimming's Luca Urlando, were the only two swimmers to win three events of the same stroke; not including freestyle. Archive photo via Mike Lewis/Ola Vista Photography

On the third and final night of the 56th annual Mel Zajac Jr. International Meet, two age group stars in Luca Urlando and Jade Hannah completed their sweeps of the 50/100/200 distances of butterfly events and backstroke events, respectively.

After winning the 50 fly on night one and the 100 fly on night two, earning personal bests in both, Urlando put up a monster 1:54.35 personal record in the 200 fly tonight, which is the third fastest time in the world this year. That time easily cleared the meet record, and is within striking distance of Michael Phelps’s legendary 17-18 national age group record of 1:53.93.

Island Swim Club’s Jade Hannah also won all three of the backstroke events this weekend. Winning the 200 with a 2:10.62 and the 50 in 28.24, the 17-year-old Canadian threw down a swift 1:00.14 for the win in the 100 back. Her best time in the event is a 59.62 from the 2017 FINA World Junior Championships in Indianapolis – approaching that mark in May with this year’s Junior Worlds coming up could be an indicator of a personal best to come later in the summer.

Also earning three individual event wins was 16-year-old Torri Huske, who’s representing the United State National Junior Team. Huske won the 50 and 100 butterflies the first two night, and clutched out a third victory in tonight’s 100 free final, posting a 55.69 to beat out Mackenzie Padington – a rising third-year from the University of Minnesota – who earned second by the slimmest of margins with a 55.70.

The last three-time event winner of the meet was another 16-year-old: Emma O’Croinin. Winning both the 200 free and 1500 free earlier in the competition, the Canadian distance ace claimed the top spot in the timed final of the 800 free with a final time of 8:42.72. Keeping up with O’Croinin through the first half of the race was University of Calgary’s Danica Ludlow – she held on for the runner-up spot in a time of 8:46.77.

Great meet also for Charlotte Hook (and for all those swimmers we don’t know but are in heavy training).

Lol. Bobo is not Voldemort

Where have you been Bobo?

14
-3
Reply
remel can do anything
Reply to  bobo gigi

The boy will be in the Tokyo Olympic roster hopefully..

At this rate, yes indeed for 2 Fly at the very least.

Well I guess 2018 was the off year of swimming, BOBO can only be worried about world champs and the Olympic, who do you think wrote the final season of GoT?. I look forward to nationals this summer when Urlando drops a time that would’ve medaled at Champs, maybe someone finally gets fired and 2023 doesn’t make the same mistakes.