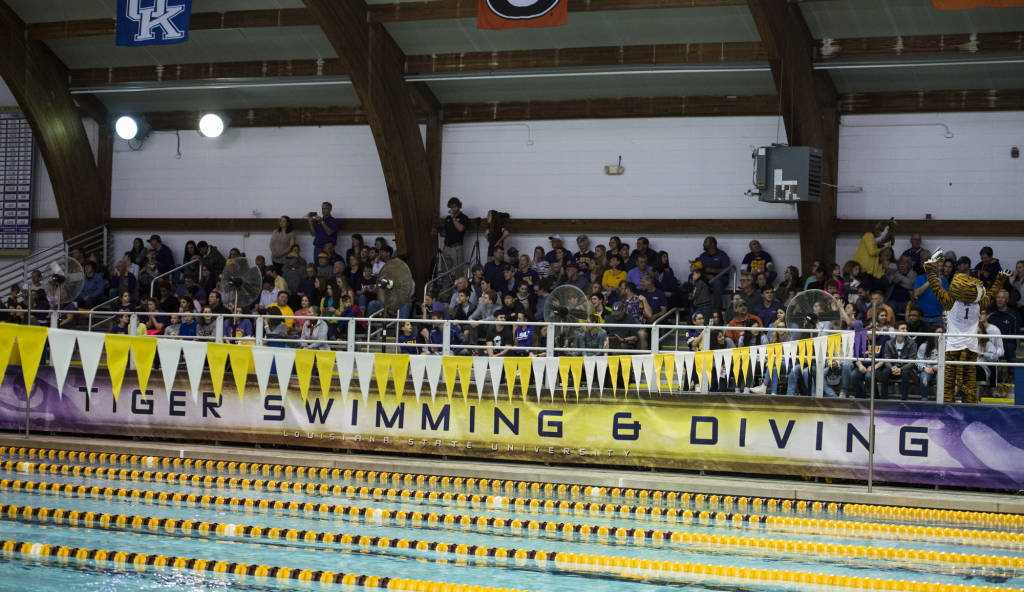 Mellor, who was retained by new LSU head coach Rick Bishop, says he made the decision to prioritize "my integrity and personal mental health." Stock photo via LSU Athletics

LSU associate head coach Steve Mellor announced his resignation from the program on Friday, ending his second stint with the Tigers that lasted just over six seasons.

Mellor, who was hired as an assistant with the program in January 2015 after a brief stint at LSU in 2011-12, announced the news via Instagram, saying that the decision was a very difficult one and that he is prioritizing “my integrity and personal mental health.”

“We get one go at this thing called life, and swimming has been at the center of mine for two decades, so as you can imagine this wasn’t a professional decision that came easy,” Mellor wrote in the post.

“Fortunately, having invested so much time in the building of myself, the person I am, the man I am, and of course the husband and father I am, it is in fact easy to know when I need to do what it is right for me and my family.”

Mellor also thanked all of the swimmers and coaches he’s worked with over the years before offering a glimpse into his reasoning and what might come next.

“In making this decision I have prioritized my integrity and personal mental health,” he said. “I have always loved my job, and I have preached and reinforced the need for us all to do something we love regularly with the athletes I have had the privilege to work with. At this juncture of my life, I have opted to be the example to those athletes and remain true to my belief system by deciding to find something new.

“With daddy daycare runs taking effect on Monday and with new opportunities already in the pipeline, it is time to begin writing the next chapter.”

During his second stint with the team, Mellor spent six seasons as an assistant coach at LSU, beginning in January 2015, and was promoted to associate head coach in July 2020.

In the 2020-21 season, Mellor helped Brooks Curry become the LSU swimming program’s first-ever Olympic gold medalist, attending the U.S. Olympic Trials in Omaha with Curry where his fourth-place finish in the men’s 100 freestyle qualified him for the U.S. Olympic team in the men’s 400 free relay. The American men’s team went on to win gold in Tokyo in the event.

During the collegiate season, Mellor helped the Tiger men to their highest NCAA finish since 2003, placing 18th with 68 points. This included Curry becoming the first LSU swimmer to earn All-American status in three different events at the NCAA Championships.

A native of Stockport Chesire, England, Mellor was a former British National Team swimmer and was a rare three-year term captain with the NC State Wolfpack in the NCAA from 2004-2008. After completing his eligibility at NC State, he went on to become the head coach of the school’s affiliated Wolfpack Aquatics.

After his brief initial stint at LSU in 2011-12, Mellor coached at Creative Aquatics and Nationwide Swim Clinics in England before rejoining the Tiger program in 2015.

Mellor was retained by new LSU head coach Rick Bishop, who was named to the position in June after longtime head coach Dave Geyer resigned after 16 seasons with the Tigers, including 11 as head coach.

With Mellor’s resignation, LSU currently has one associate head coach in Jon Sakovich, along with two assistants, one volunteer assistant coach and two graduate assistants.

More generally speaking, but to your point: due to confidentiality/athlete privacy, collegiate coaches aren’t able to respond to the vast majority of the claims/perceived “truths” in Swim Swam articles (and their comment sections). Some of the things written on here have been down right awful and quite damaging- how does this impact the discussed coaches’ mental health?

There’s a lot of focus on athlete mental health (as there should be) but even as “grown adults” it’s imperative that we remember that coaches are people/human too, and their mental health should be valued.

A coach talking about their own mental health is big time. I think we should be acknowledging this!

Sounds like he’s stepping away from swimming altogether. Early-mid 30’s with family, $58k doesn’t go very far for all that work. The “integrity” line sounds more about his belief system in “doing something he loves.” Sounds like burnout to me.

sometimes things are what they are and there is not grand conspiracy or evil men behind the resignation. Many assistant have left the game because of the demands.

Steve loves coaching, loves helping student-athletes achieve their goals in and out of the water, loves LSU – ask anyone that saw him coach or was coached by him. The integrity line is 100% about the fact that the environment he left was one that didn’t respect him, the athletes dignity, or really just anyone in general.

This is a massive loss for LSU athletics. Steve is one of the most dedicated and knowledgeable coaches in the NCAA system. If he decides to stay in coaching he will be a home run hire for whoever picks him up.

Steve is one of the most passionate and committed humans on the planet. His investment in anything he does (coaching, friend, husband and father) is 100% and I’m excited to see where his career path will lead down the road and who and what he will make better around him

Those that know him and around know why this decision was made. Others will continue to tell their lies to aid their insecurities.

Is it too late for Brooks Curry to transfer?

I’ve heard the kids there are getting treated very badly by Bishop. Sad to think they’ve lost a coach who cares for them so deeply. He’s pushing the kids to the point of injury by disregarding the NCAA rules about training.

Where did you hear this? Seems like false information

I can confirm this is not false information.

Bishop did that at Michigan too, sounds about right for him. All the athletic trainers hated working with him.

Yep. I feel so deeply for those athletes, time with rick being my coach was the worst moments of my life. Praying for them.