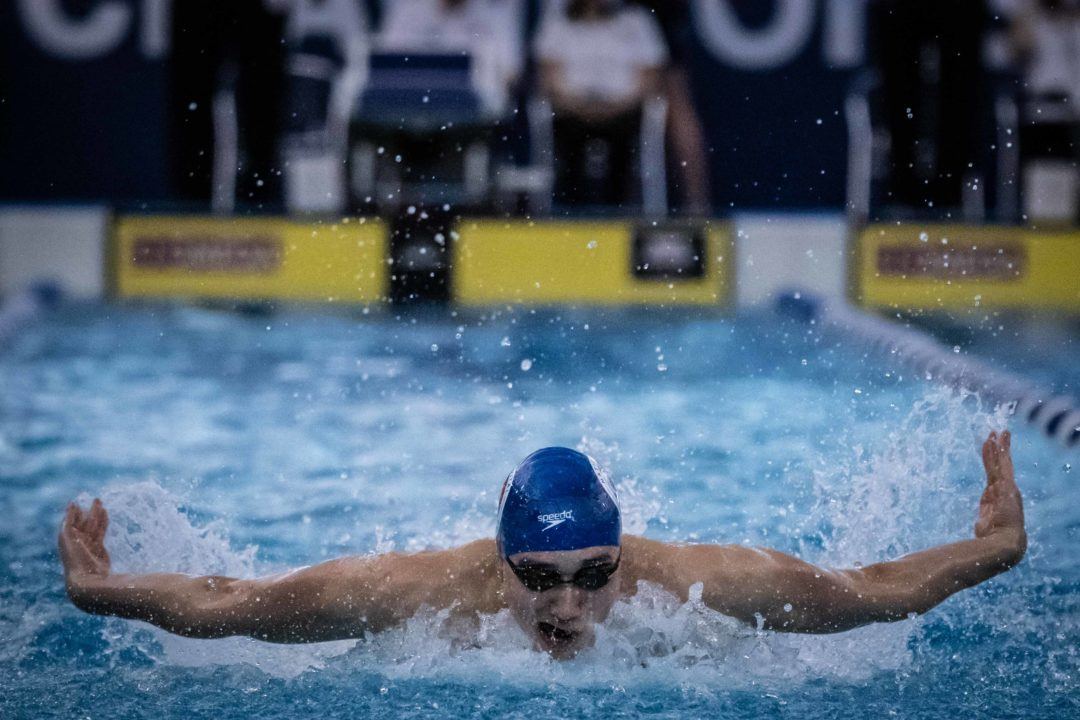 For the first time in SwimSwam history, we're recapping an intrasquad. Yes, we really do miss college swimming that much. Archive photo via Mike Lewis/Ola Vista Photography

As dual meets finish and prep for conferences start, we thought it would be a good time to check in on the swimmers still undefeated in individual events.

The BC Eagles had a dominant performance at their rivalry meet versus BU, breaking three school records and fifteen pool records.

For the first time in history, SwimSwam is live-recapping an intrasquad meet.

You read that right.

We’re so desperate for high-level swimming in the US amid the ongoing coronavirus pandemic, that we’re going full live-recap for tonight’s University of Virginia intrasquad season opener.

With no live results for the meet, we’re hoping this can serve as your link to what’s happening, especially with the Virginia women – who enter the season as favorites to win the NCAA Championship (if there is an NCAA Championship).

We’ll do our best to post results throughout the session, with recaps of the highlight swims below.

The meet is being broken up into 3 sessions by “days” of the NCAA Championship meet, with no relays.

Note that the teams are wearing racing suits for the event, though they’ve only officially been back in training on campus for a few weeks.

Madden ranked 2nd in the NCAA last season in the 500 free in 4:34.64. The only swimmer faster than her, Arizona State’s Emma Nordin, is redshirting this season (along with the rest of her team).

Last season, Madden’s season-opening time at the Trojan Invite in early October was 4:38.67, so she’s no stranger to early-season speed.

Rising Virginia sophomore Sean Conway kicked off the men’s side of the meet with a 1:45.83 in the 200 yard IM. That broke the old record of 1:46.58 set by Pat Mellors in 2008. Mellors entered that season as the defending World University Games champion in the 400 IM.

Catie DeLoof announced that she was joining the Virginia post-grad/pro group in early August, and early returns are positive. She swam a 22.18 in the 50 yard free on Friday evening. While she exhausted her NCAA eligibility in the spring of 2019, that’s the best “in-season” time she’s ever had, and only three-tenths slower than her lifetime best of 21.88 from the 2019 Big Ten Championships.

DeLoof is registered to swim with the Tokyo Frog Kings this season in the ISL. The 2020 ISL season begins in 3 weeks in Budapest, Hungary.

Most of the focus with Virginia, and rightly so, has been on their women’s team, which was seeded to score the most swimming points, by far, at the 2020 NCAA Championships, before that meet was canceled.

But the men brought in the top 50 freestyler in the freshman class nationally, and #6 recruit overall, in Matthew Brownstead.

He kicked off his ‘Hoos career on Friday with a 19.89 in the 50 yard freestyle. That’s the 4th-best time of his career, trailing the 19.24 that he swam at the 2020 Pennsylvania High School State Championship meet.

It also moves him quickly up the school’s all-time rankings: he’s now tied with Joe Clark for 10th all-time in program history.

If things go according to plan, that school record should be broken this year. The fastest swimmer in UVA history is Ryan Baker, who swam a 19.42 at the end of last season as a senior. Brownstead’s best time is already faster than that.

In 2nd was Kate Douglass, one of the stars of the collegiate team, who made her season debut with a 1:44.51 for 2nd place. For the versatile Douglass, this was an event that she didn’t swim much of last season. The time is a new personal best, clearing the 1:45.16 that she did as a senior in high school at the Ithaca Sectionals.

Those times both broke the old Pool Record of 1:44.66 set by the aforementioned Paige Madden earlier this year.

The top-ranked freshman who is actually going to swim the 2020-2021 collegiate season, Alex Walsh made her debut in the 100 breaststroke on Friday evening.

Following a familiar pattern, where last season’s top Cavalier freshman Kate Douglass swam a lot of breaststroke, the versatile Walsh won her first race in 59.85. That beat junior Alexis Wenger, who was last year’s ACC runner-up – she touched 2nd in 1:00.42. Another freshman, Anna Keating, placed 3rd in 1:01.66 – she has a best time of 59.04.

Walsh is a supremely-versatile swimmer and a member of the US National Team – in the 200 back and 200 IM. Much like Douglass, who wound up as the fastest 200 IM’er in the NCAA last season, Walsh’s career could run in almost any direction.

Her younger sister Gretchen, a sprint freestyler, is committed to join the Cavaliers in the fall of 2021.

Last year, at the early-October Trojan Invite, he swam a 53.07 to open the year.

After his record-breaking 200 IM earlier in the meet, Sean Conway swam 54.82 in the 100 breaststroke for 2nd place. That improved his previous best time of 55.13 that he set in high school.

Virginia senior Caroline Gmelich swam a 52.68 in her best event, the 100 back, on Friday. She was the ACC runner-up in that event last season and ranked 19th in the NCAA overall.

That is easily her best time outside of a Championship meet or mid-season invite – last year she opened up the season with a 53.91 at the Trojan Invite.

Conger is the Amercian and U.S. Open Record holder in the 200 yard fly. His 1:37.35 done at the 2017 NCAA Championships is the fastest time ever done in that event.

Conger is not listed on an ISL roster for the 2020 season, though he swam for the LA Current last year.

The meet went off-script with a second round of 100 yard butterflies in the 3rd session of the day.

In that race, the freshman Alex Walsh picked up another win, swimming a 52.1. Her best time in that event is 51.31.

Virginia sophomore Kate Douglass is now the fastest female swimmer ever in the 100 yard IM.

Her time of 52.48 on Saturday makes her the first known woman to ever go under 53 seconds in the event. The previous best time was done by US Olympian and Olympic medalist Katie Meili at the 2014 OKC Pro-Am Classic, where she swam 53.02.

While not a common race in the U.S. the event is an official NCAA race, though not an NCAA Championship event yet. World Championships are awarded in the 100 IM in short course meters as well.

The highest-profile championship meet that usually offers a 100 yard IM is the NCSA Junior National Championships.

Where’s Emma Weyant at? Also, what did they do to Sophie Skinner? She was quite the swimmer out of HS.

Excited for tomorrow
NOTE: comment on the livestream says tomorrow will start at 3pm ET not 5

Yeah, but how many of them can eat 6 Gusburgers in 6 minutes???

Probably quite a few of them…

Wow Kate Douglass with that 52.48 100 IM! Unofficially fastest all time.

I year ago at the UVA intrasquad, Kate went 53.39. So, it’s a .91 drop in a year. Would have loved to have seen Alex Walsh swim next to her – maybe next year’s intrasquad.

Nice to see they got the meet up and running again after Conway did that to the facility.. must have been some swim.

Nations Capital has an amazing legacy of swimmers and they keep coming!