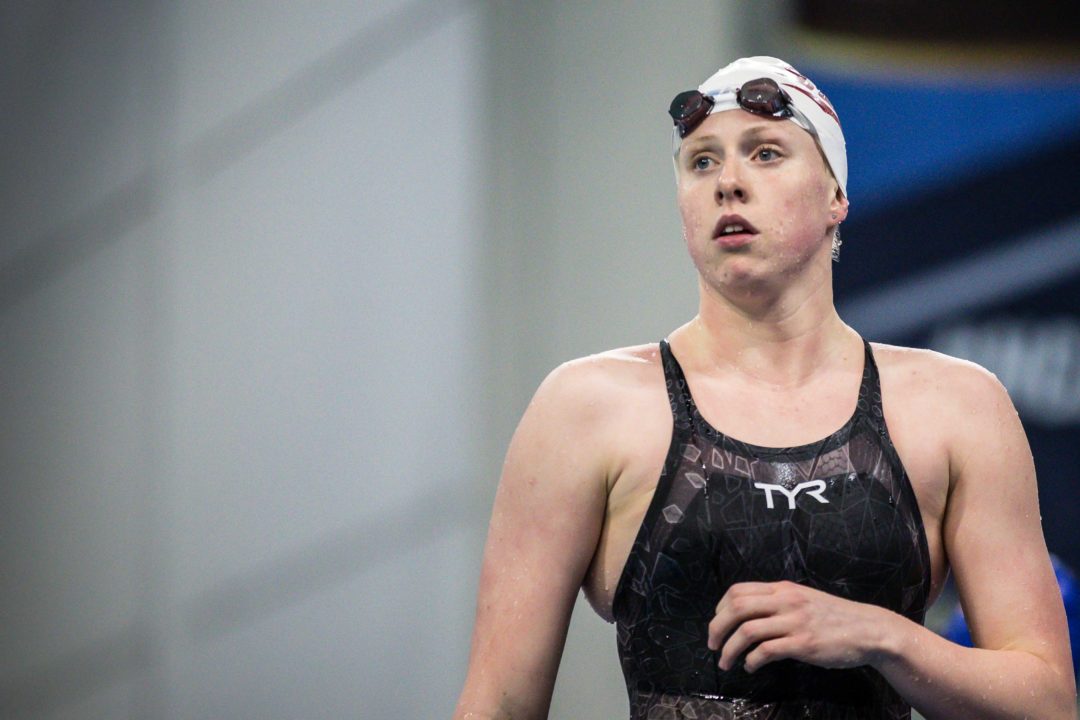 Before King, only Brendan Hansen had ever won both breaststroke events across all four years of college swimming Archive photo via Jack Spitser/Spitser Photography

After sealing her fourth-straight 100 breast win by breaking every record in the books Friday night in Austin (going 55.73), Lilly King topped the 200 breast Saturday (2:02.90), nabbing the four-peat in that event as well.

The 100 breast win Friday was King’s seventh breaststroke title overall, which made her the winningest female breaststroker in history, and the 200 win sealed her as the first woman to four-peat in both breaststroke disciplines. She surpassed Rebecca Soni, the 2008 and 2012 200 breast Olympic champion, who won it all four years she swam for USC, but won the 100 only twice.

King, the 2016 100 breast gold medalist and reigning world record holder, is just the second woman ever to sweep two distances of one stroke. The first to do it was Olympian Kara Lynn Joyce in the 50 and 100 freestyles from 2004-2007. Multi-time Olympic gold medalist Natalie Coughlin also swept two events in her NCAA days (2001-2004), but they were the 100 back and 100 fly – she came close to winning eight titles in a single stroke but took third in the 200 back her senior season after winning it 2001-2003.

Olympic medalist Brendan Hansen is the only other swimmer, male or female, to have won all eight breaststroke races in his four NCAA seasons. Other men have gotten relatively close: Kevin Cordes, while at Arizona, and Steve Lundquist, while at SMU, each four-peated in the 100 breast; Cordes also won the 200 twice.

Congratulations to Lilly King on such an amazing achievement!

Nice to see diver Megan Neyer added in too. Thanks

My money is on TYR.

Just a shout out to Will Licon who stopped Kevin Cordes

Cordes had already lost the 200 breast his freshman year, so he wasn’t truly stopped by Licon (though it was quite the upset)

As much talent as it takes to four-peat, I wouldn’t say it’s indicitive of the best who have ever swum in the NCAAs, it more or less shows who is/isn’t a late bloomer. Dressel didn’t even final his freshman year (100 fly/free) and is without a doubt the fastest/most dominant swimmer to ever come out of college in those races

Hard to compare different people from different eras. You can really on look it it for that year.

Even though the Steelers have won the most number of Super Bowls in history that’s not indicative of being the best NFL franchise ever.

For example, I’ve seen the patriots win Super Bowls in my recent adult life so clearly they’re the best ever.

I think you have some recency bias in your assessment here… look at the swimmers on that list. Even as recently as Ryan Murphy you’re talking about a world record holder and Olympic gold medalist

I think everyone listed but 1 is an Olympic hold medalist and/or works record holder right?

Cordes, while at Arizona*

Cordes swam at Arizona, not Auburn.