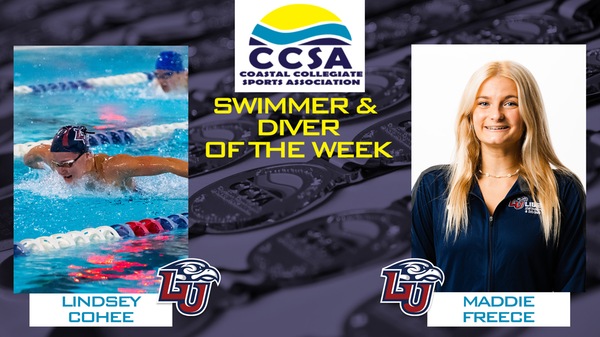 ATLANTA, Ga. –  Liberty’s Lindsey Cohee earned the CCSA Swimmer of the Week honor while teammate Maddie Freece captured Diver of the Week, announced Tuesday by the league office. The Flames opened the 2020-21 slate this past weekend with two team wins over UNC Asheville and Campbell.

CCSA Diver of the Week
Maddie Freece, Liberty
Freshman | Lansdale, Pa.
– First CCSA Diver of the Week honor of her career, only the seventh Liberty Diver to earn weekly recognition
– Earned a pair of first-place finishes in her collegiate debut against UNC Asheville on Friday
– In the first one-meter session she tied for first with teammate Olivia Robinson after scoring a 281.80, is tied second in program history in the one-meter even
– Won the second one-meter session outright with a 259.30
– She is the fourth Flame in the program’s history to qualify for NCAA Zone Championships, but the first to do so in her first career collegiate meet