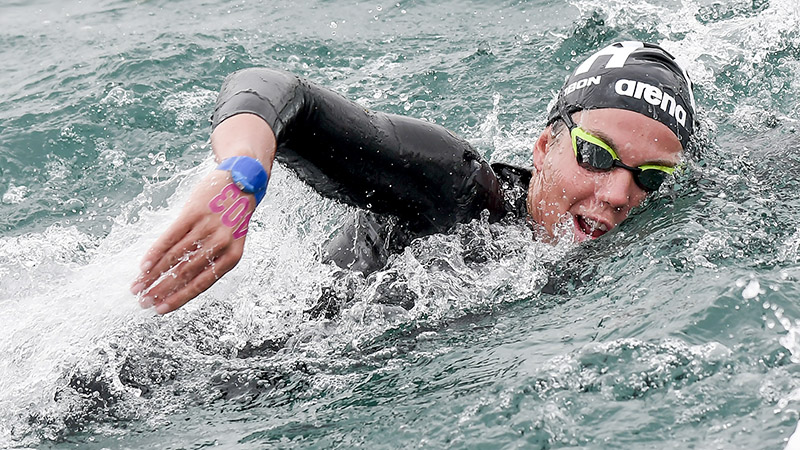 Boy and Reymond took the respective women's and men's 25k titles to close out the Open Water portion of the 2021 European Championships. Current photo via Andrea Staccioli / Deepbluemedia / Insidefoto

The open water portion of the 2021 European Aquatics Championships has officially ended upon the conclusion of the 25k individual races. The 25k was the last of 4 races which included the individual 5k and 10ks, along with the team 5k event.

On the women’s side, German’y Lea Boy pulled out the win with a 4:53:57.0 which was just over a minute quicker than Lara Grangeon representing France who was a 4:54:58.4 for silver and Barbara Pozzobon‘s 4:54:58.7 bronze medal performance for Italy.

Boy took gold in the 25k having raced the individual 10k earlier on at the 2021 Championships were she placed 16th overall with a 2:03:49.4. Boy also raced as a part of Germany’s contingent in the team 5k, taking silver to Italy with teammates Leonie Beck, Rob Muffels, and Florian Wellbrock.

25k silver medalist Lara Grangeon on the other hand has raced all 4 of the open water races this week for France. She finished just off the individual 5k podium with a 58:56.4 for 4th place and contributed to France’s 4th place finish in the team 5k along with teammates Océane Cassignol, Logan Fontaine, and Marc-Antoine Olivier. Grangeon was the only swimmer to contest the 25k who is qualified to race at the Tokyo Olympics, having placed 4th to earn a spot in the race at the 2019 World Championships.

Barabara Pozzobon took bronze in the 25k, accounting for her second event of the championships. Earlier on in the week she swam to a 9th place finish in the 5k with a 59:00.4.

Neither of the top 2 finishers in the 25k at the 2018 Championships were present during this year’s race as 2018 victor Arianna Bridi didn’t race this year in Budapest and 2018 silver medalist Sharon van Rouwendaal opted not to race the event. Van Rouwendaal did, however, claimed gold in both the 5k and 10k individual events.

Notably, 5k bronze medalist Océane Cassignol and 10k silver medalist Anna Olasz are both listed among those who did not finish the 2021 Chamnpionships 25k race.

This was Axel Reymond‘s second race of the championships and was an improvement upon his 7th place finish in the 10k where he swam a 1:51:49.6. Reymond’s result is also better than his performance at the 2018 European Championships where he was left off the podium, swimming a 4:58:03.4 for 4th place.

Back in 2018, Kristóf Rasovszky won gold in the 25k for Hungary while Russia’s Kirill Belyaev took silver for Russia. 2021 silver medalist Matteo Furlan was bronze back in 2018 for Italy.

Now that all open water races have concluded, Italy sits atop the open water medal table with a total of 8 medals while the Netherlands is second with 2 golds and France follows with 1 gold, 3 silvers, and a brone.