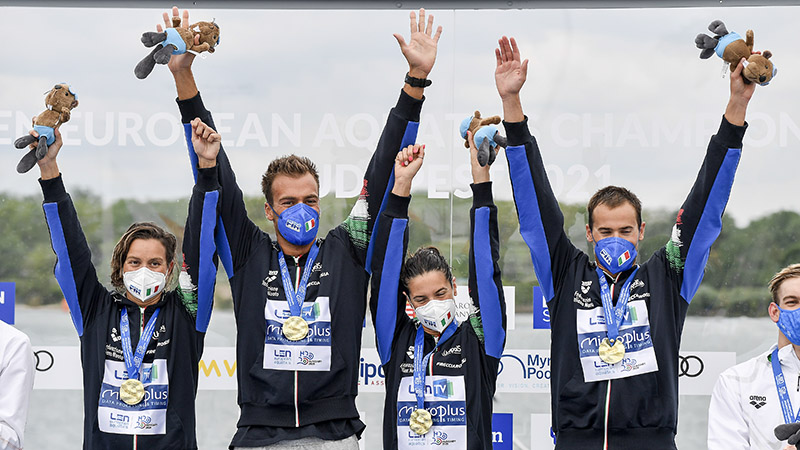 Bruni, Gabbrielleschi, Paltrinieri, and Acerenza threw together a winning swim of 54:09.0 to take gold in the team event. Current photo via Andrea Staccioli / Deepbluemedia / Insidefoto

The Italian team made up of Rachele Bruni, Giulia Gabbrielleschi, Gregorio Paltrinieri, and Domenico Acerenza swam to victory in the 5k team event at the 2021 European Championships. The event was the third open water race of the Championships following the men’s and women’s 5k and 10k races earlier this week.

Leonie Beck was back in the water for the race after having scratched the individual 10k due to a non-COVID-19 related illness. She, Lea Boy, Rob Muffels, and Florian Wellbrock swam to silver while Réka Rohács, Anna Olasz, Dávid Betlehem, and Kristóf Rasovszky swam the event for Hungary, taking bronze. France, Russia, and the Czech Republic were 4th, 5th, and 6th as the only other teams to compete in the event.

The swim is an improvement for Italy upon their 5th place finish at the 2018 European Championships where they lost out to the Netherlands (gold), Germany (silver), France (bronze), and Great Britain (4th). Gabbrielleschi was the only swimmer to compete in the team event for Italy at both 2018 and 2021 as Martina De Memme, Matteo Furlan, and Mauro Sanzullo joined her in the 2018 version of the event.

Back in 2019, the exact same Italian contingent that just won gold in Hungary (Bruni, Gabbrielleschi, Paltrinieri, and Acerenza) won silver to Germany at the 2019 World Championships in the team 5k.

This win marks Paltrinieri’s third gold medal of this meet, having taking gold in both the 5k and 10k individual men’s events. Additionally, it’s Gabbrielleschi and Bruni’s second medal as they picked up silver in the 5k and bronze in the 10k, respectively.