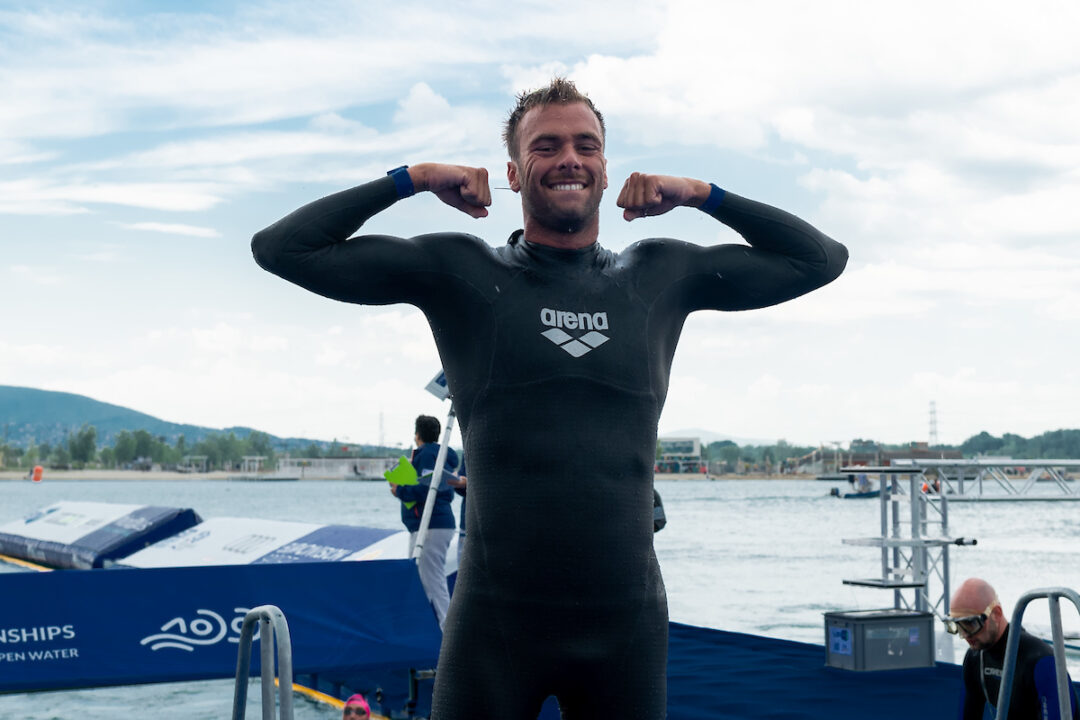 Following the 5k race yesterday, the open water swimmers competing at the 2021 European Swimming Championships were back in action today for the 10k. The 10k is the 2nd of 4 open water races set to take place at the championships as the team 5k and individual 25k are set to occur later this week.

Van Rouwendaal’s win bodes well for her upcoming 10k in Tokyo in which she will be looking to defend her gold medal performance in the event in Rio. She was also golden in the 10k at the 2018 European Swimming Championships but then fell to 10th place at the 2019 World Championships, placing 5th among European entrants.

Anna Olasz had a solid silver medal-winning performance, improving upon her 11th place finish at 2018 Euros. Olasz was among those competitors in the 10k who did not race the 5k, meaning that this was her first race of the championships. Olasz raced the 10k at the 2016 Olympics and placed 14th but hasn’t yet qualified to swim in Tokyo, having placed 16th at the 2019 World Swimming Championships.

Olasz will have a shot to qualify for Tokyo at the upcoming FINA Marathon Swim Olympic Qualifier which was originally scheduled to take place in Fukuoka, Japan from May 29-30 but will now occur in Setubal, Portugal from June 19-20. There, the top 9 finishers who haven’t yet qualified for Tokyo will be given a spot in the event in Tokyo. As a reminder, the 10 athletes who are already qualified to race the event include the top 10 finishers from 2019 Worlds:

Both of Olasz’s co-medalist at 2021 Euros have already qualified for Tokyo in the 10k as van Rouwendaal placed 10th at 2019 Worlds while Rachele Bruni won bronze for Italy. Bruni’s bronze medal performance is an improvement upon her 4th place finish at the most recent European Championships where she 4th place. As previously mentioned, Bruni also won bronze at 2019 Worlds and was the silver medalist back in Rio in 2016.

Spain’s Paula Ruiz jumped from 10th place at 2018 Euros to 4th place in this year’s 10k and will likely be among those fighting for a spot in Tokyo next month considering her 24th place finish at 2019 Worlds. Giulia Gabbrielleschi followed up her silver medal performance in the 5k with a 5th place finish while Angélica André rounded out the top 6 for Portugal.

Notably, 2021 Olympic qualifier Leonie Beck did not swim the 10k despite being entered in the event. Beck earned a spot in the event with her 9th place finish at 2019 Worlds. She opted out of the 10k but did race the 5k yesterday, notching a 5th place finish for Germany.

Like van Rouwendaal, Gregorio Paltrinieri collected his second gold medal of the championships by winning the men’s 10k title, notching a 1:51:30.6. Marc-Antoine Olivier also matched his performance from the 5k by taking silver for France in a 1:51:51.7 while Germany’s Florian Wellbrock swam a 1:51:42.0 for bronze. 2016 Olympic gold medalist in the event Ferry Weertman just missed the podium, hitting a 1:51:43.0 for fourth place.

The swim for Paltrinieri is an improvement upon his 6th place finish at Worlds in 2019 and makes a solid case for his upcoming effort to pull off a top finish in Tokyo this summer. His top 10 finish in Gwangju gave him a spot in the event this summer, along with 9 others:

As is the case with the women, those swimmers who were not within the top 10 in Gwangju will have a shot to qualify for the Olympics at the upcoming FINA Marathon Swim Olympic Qualifier in Setubal, Portugal from June 19-20.

Marc-Olivier Antoine was second to Paltrinieri, matching his result from 2019 when he took silver to Florian Wellbrock. Antoine will be among those racing in Tokyo this summer, looking to improve upon his bronze medal finish from 2016. As one of the world leaders in the open water events at the moment, Antoine’s silver medal is the latest in a number of accolades including his Olympic bronze, his gold in the individual 5k, and team 5k at 2017 Worlds, his silver in the individual 10k at 2019 Worlds, and his bronze in the individual 10k at 2017 Worlds.

Another man who sits atop the open water scene at the moment is 2019 World 10k champion, Florian Wellbrock. Wellbrock took bronze in the 2021 Euros 10k, coming in just 0.30 seconds after Antoine. Wellbrock’s performance in Gwangju qualified him to race the event for Germany this summer where he will compete in his first-ever Olympic open water race. Back in 2016, he raced in Rio but only contested the 1500 freestyle where he placed 32nd overall with a 15:23.88.

Defending Olympic champ Ferry Weertman was certainly in the mix but wound up just missing the podium with a 1:51:43.0 for fourth place. Following his Olympic win, Weertman remained fairly consistent by taking gold in the 10k at both 2017 Worlds and 2018 Euros but then fell to 7th place in the event at 2019 Worlds. Weertman’s top 10 finish was, however, good enough to qualify for the Olympics meaning that he will have a shot this summer at defending his title.

Nice race by Olasz, she was just outtouched by Van Rouwebdaal at the finish, but she closed a gap of more than 6 seconds in the last about 700m. Hopefully, she will earn an Olympic spot next month.

I loved the comeback of Olasz, what a race from her as well. In my opinion one key moment of van Rouwendaal’s victory was the turn at the last bouy. This was the moment when Olasz finally managed to come back to equal, but the Dutch girl was closer to the bouy and managed to turn tightly giving her again almost a bodylength of advantage. Then Olasz managed to come back once again to equal , maybe even overtook van Rouwendaal for a few second but used up the energy needed at the finish. Maybe if she closes the gap on the other side of van Rouwendaal and fights herself to have the tight turn position at the last bouy… Read more »

“The swim for Paltrinieri is an improvement upon his 6th place finish at Worlds in 2019″
These are two different meets with different competitors, you can’t compare between them.

Nevertheless, most of the top swimmers in the field are European

4
-1
Reply
NOT the frontman of Metallica
Reply to  Swimmer

Given that there was only one non-European in the top 10 at worlds 2019 I would say you can definitely compare them.

Very rare when someone swims away from the Peloton and wins by 11 seconds, although I am not surprised it was Paltrinieri.

12
-1
Reply
NOT the frontman of Metallica
Reply to  Swimmer

I think that tactic is his best chance at winning, same goes for Jordan W of the US. In a tight sprint finish I believe Wellbrock and Weertman has the better of both of them. So well done in using his strengths