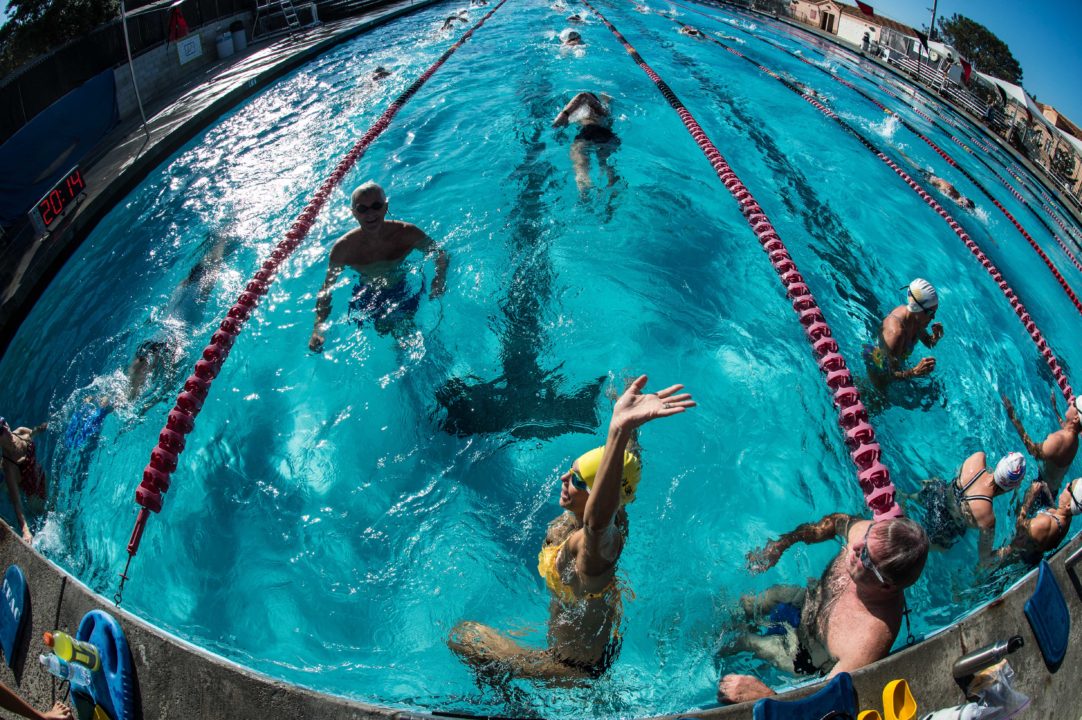 The people you swim with day in and day out can have a profound effect on both your enjoyment and performance in the pool. Archive photo via Mike Lewis/Ola Vista Photography

One of my favorite places on Earth happens to be the pool at Carson-Newman University, where I swam in college. More specifically, lane 2. While I swam many many yards in that lane, what makes it memorable wasn’t the practices written up on the whiteboard, because in many regards, lane 2 wasn’t all that different from lane 1 or lane 3 or even lane 6. Rather, it is the people who swam in that lane with me that made lane 2 feel like home. These were the people that made those hard practices fun, the people that supported and pushed me to be the best I could be, and the ones that knew if we were about to do a kick set that I needed to be at the back of the lane.

While I spent two of my four years of college swimming in lane 2 with the same people, having (or being) a good lane buddy does not mean you need to swim with the same exact people every day. It does mean making the most of practice by uplifting the people in your lane, having fun, and not complaining. In high school, I sometimes swam in the lane with one of my friends that checked off all of these boxes. You may actually be familiar with this certain batman onesie, yellow croc wearing pal of mine ;). It was an adventure every day in that lane, a few times it even entailed circle swimming the entire practice backwards just for fun. Regardless of the shenanigans, getting in that lane meant you were going to be pushed to do your best and have fun along the way. Take it from me, once you retire you are going to remember the people you swam with and what it was like to be around them, not the sets on the board.

Once I started college and found my home in lane 2, my friend started flipping my cap every day. Despite being able to do it myself, it just went on way better when my friend did it. This is a skill that some people just don’t have, so knowing I had someone who I could count on to do a good job, was really nice. She graduated a couple of years before me, and after that I just started putting my cap on for myself because other people just couldn’t quite do it the same. While most people don’t need to have a friend flip their cap every day, everyone needs to have a teammate they can rely on. Someone who will give you an extra hair tie when yours breaks, or who will remind you what’s next in the set because you forgot. Someone who you know will be there every day ready to work.

Something I was big about during swim practice was music. I did not like to swim in silence, I wanted to be able to hear something in the moments I was on the wall. I’ve spent many of those brief moments on the wall jamming to the music with my lane buddies. There is a really good chance that we got into a little trouble because we got too into singing along a few times… whoops. There are a few songs that I can’t hear without being immediately transported back to lane 2. Those are some of my favorite memories, and those moments really helped me make the most of practice. If you can’t have fun with swimming, what’s the point? As long as you’re still putting in the work during practice, you can afford to have a little fun at the wall.

I always liked when I got to swim with my club team at home during the few breaks I had. That’s because a few of my favorite people would be home from school as well and we would finally get to swim together. It made it much easier to get up and go to a morning long course practice over Christmas break knowing they would be there too. Those practices got to be a mini reunion, where we finally got to be lane buddies again after months apart. They held me accountable to being at practice when I wanted to sleep in. They pushed me to be my best even though we “technically” swam at rival schools. Good lane buddies don’t have to be the ones you see every day, but they are the ones you most look forward to seeing.

Lane buddies are the people you get to social kick with. Lane buddies are the ones that give you a fist bump at the end of a test set that you rocked. They are the ones that encourage you to go the fast interval. Some people may think that swimming is an individual sport, but it’s really a huge team sport. That starts with the people who swim with you day in and day out. You also have to realize that not only is it great to have a good lane buddy, but you need to be a good lane buddy too. It can be hard sometimes to come into practice with a positive attitude, but positivity can be contagious, so it starts with you. At the end of the day, it’s not about the lane, it’s about the people in the lane.