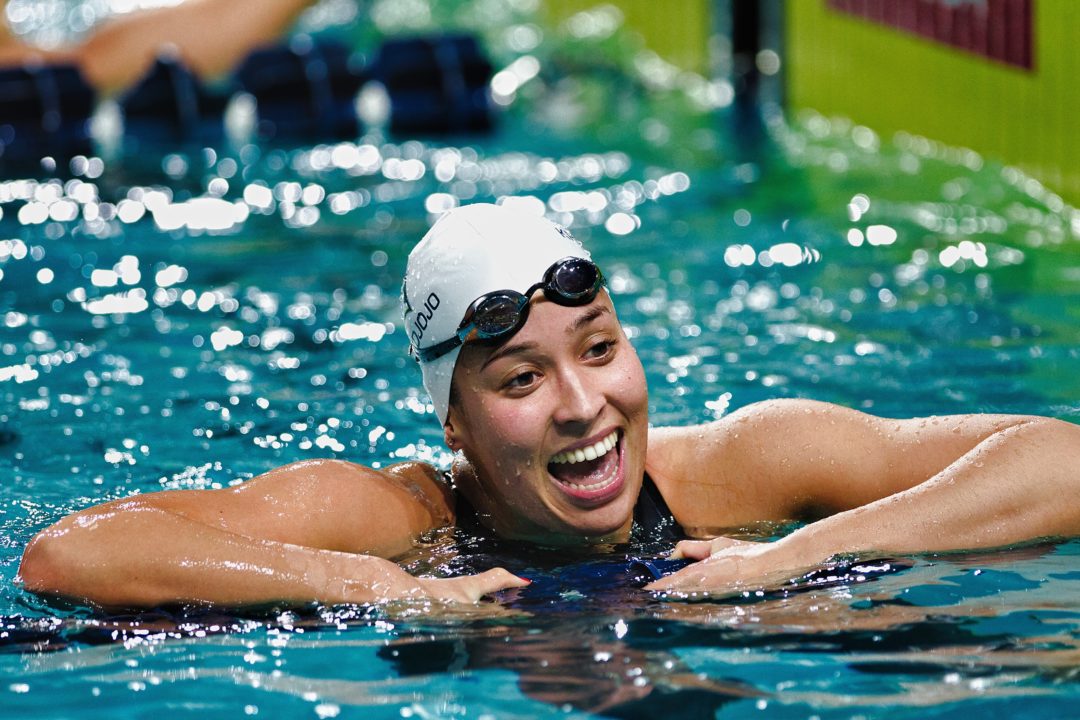 Olympic 50 and 100 freestyle champion Ranomi Kromowidjojo came away with gold in the 50 freestyle on the third night of...

Olympic 50 and 100 freestyle champion Ranomi Kromowidjojo came away with gold in the 50 freestyle on the third night of the British Gas International in Leeds.

The final of the 50 had it’s share of stars including Femke Heemskerk, Natalie Coughlin, Jeanette Ottesen Gray and Fran Halsall.

Jazmin Carlin who has expressed both her disappointment after her 2012 performances and her determination to have a successful 2013 campaign has started with success in the 1500 freestyle winning the event in a new Welsh record time of 16:18.80.

This event was swum during the preliminaries session this morning.

Roberto Pavoni, Matthew Johnson and Xavier Mohammed entered the breaststroke leg of the 400 IM with only a tenth of a second between them, that is when Pavoni made his move and separated himself from the field in the breaststroke heading into the freestyle with just over a second and a half lead.

The women’s 200 butterfly turned out to be a fabulous race with the top five finishers separated by 42 one-hundredths of a second going into the final 50.

Alys Thomas finished third in a time of 2:11.63, only three one-hundreths of a second ahead of Hannah Miley.

Although she did not swim the final Olympian Jemma Lowe had the fastest 200 butterfly on the day posting a time of 2:10.28 in the heats.

Chris Walker-Hebborn led the race from start to finish with Olympian Liam Tancock following close behind. At the 50 meter mark Walker-Hebborn turned in a time of 26.29 with Tancock trailing by 17 one-hundreths of a second with a 26.46.

In the end Walker-Hebborn took the event in a time of 54.80 with Tancock finishing in second with a time of 55.00.

Bastiaan Lijesen finished third in a time of 55.27.

Olympic champion Ruta Meilutyte won the event easily posting a time of 1:06.75, which eclipsed the current world’s best of 1:07.15 swum by Rikke Moller Pedersen in January.

The race for second was a close one between Moniek Nijhuis and Siobhan-Marie O’Connor. O’Connor led at the 50 by just over half a second, but Nijhuis had a great second 50 catching O’Connor to finish second in a time of 1:08.40.

O’Connor finished third only two one-hundreths of a second behind Nijhuis in a time of 1:08.42.

Olympic silver medallist Michael Jamieson avoided having the need for a swim-off to qualify for the final, as he did in the 100, and eventual took the event in a time of 2:10.43, which is the fastest in the world this year. The previous world best of 2:10.50 was swum by Daniel Gyurta in January.

That 50m Free was immense – looked much closer than .2 of a second. Kromowidjojo has an amazing start, she was gone and away by 25m – Halsall closed her down at the end but Kromowidjojo’s start was way too powerful. If you put Kromowidjojo’s first 25 with Halsall or Herasimenia’s turn over/second 25m…WOW!

Highlight for me was James Guy – Again. His turns weren’t quite as good as the the lads around him but between the walls he is brilliant. He really could be scarily good.

I probably expected a little too much from O’Connor after her 200IM. I still think she will go 59. in the fly though. Still it all points towards her being very fast by… Read more »

You’re probably not used to waiting as long for the trials like this. I don’t know if this will be a long term thing for British Swimming but I think it should be helpful in a post Olympic year to have them later.