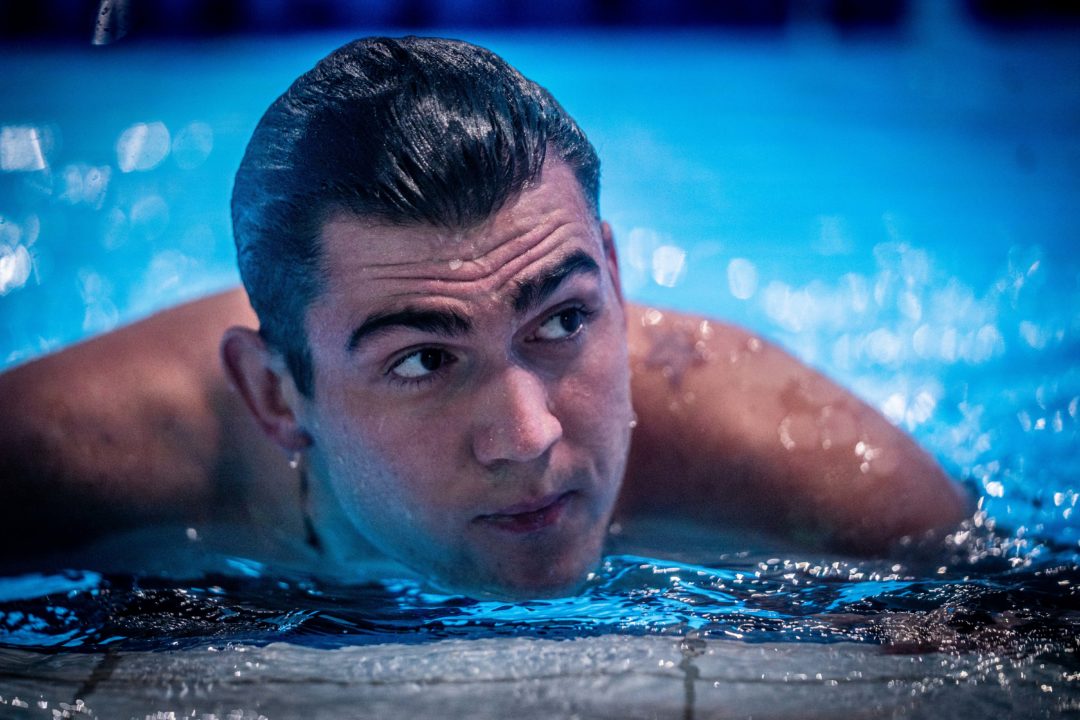 After placing 16th in the individual 100 backstroke, Kolesnikov redeemed himself on day 4 with a powerful 52.09 relay leg. Archive photo via Mine Kasapoglu

Kliment Kolesnikov rocketed to a 52.09 backstroke split for Russia in the final of the 4×100 mixed medley relay at the 2021 European Swimming Championships. Kolesnikov’s swim was actually quicker than Evgeny Rylov‘s Russian record and Camille Lacourt‘s European record of 52.11. The swim will not officially lower either of those records, however, considering that backstroke splits from mixed medley relays are not counted as official times.

FINA doesn’t recognize opening splits mixed medley relays as official times for record-breaking purposes due to the potential for a swimmer of one gender to draft off a swimmer of another gender; a p0tential advantage that wouldn’t be possible in a heat with competitors who are all the same gender. A famous occasion of a world record-beating swim during a mixed medley at the 2007 Duel in the Pool when Libby Trickett broke the then-world record in the 100 freestyle by 0.31 seconds while swimming in the lane next to Michael Phelps. Reflecting on the race, Phelps says that he knew she was drafting off him and consciously pushed off towards the other side of the lane to distance himself from Trickett. In addition to the drafting factor, the world record by Trickett didn’t count at the time due to the fact that mixed relays were not official events at the time.

That rule is different from how it works on men’s and women’s medley relays in which the backstroke leg does count as an official time. Both current long course 100 backstroke records have actually come from a relay leg as Ryan Murphy lowered the men’s mark to a 51.85 during 4×100 medley at the 2016 Olympics and Regan Smith lowered the women’s to a 57.57 as a member of the USA women’s 4×100 medley at the 2019 World Championships.

While Kolesnikov’s time was quicker than both marks, if mixed medley splits did in fact count toward records, the current Russian and European records would both belong to Kolesnikov’s teammate Evgeny Rylov. Rylov swam a 51.97 on the opening leg of the Russian mixed medley relay at the 2019 World Championships.

Kolesnikov’s relay split was an improvement upon his performance in the individual 100 backstroke. Kolesnikov raced a 52.32 100 back in the prelims to qualify first into the semis but then fell to 16th place and missed out on the final, swimming a 54.86 in the semi. Kolesnikov’s relatively weak performance during his second swim was likely due to the fact that he raced the 100 freestyle less than 20 minutes before the 100 back, claiming gold in a 47.37.

Along with gold in the 100 free, Kolesnikov won the 50 backstroke earlier on in the meet and lowered the world record twice, first to a 23.93 in the semis and then a 23.80 during the final.

I wonder if Murphy can break his own record this summer, because someone else definitely will if he doesn’t.

I wonder if Rylov is in hard training or has been sick as he was a lot faster a few weeks ago.

He told the Russian media he is in hard training

Didn’t russia swim faster at 2019 worlds lead off as well ?

Yeah it’s getting broken this summer