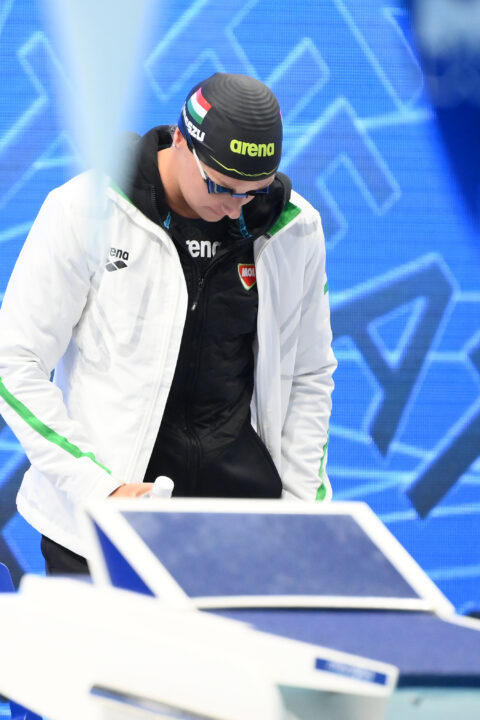 With still the 200 IM left to go, where she's the favorite to win, Katinka Hosszu has tied Sarah Sjostrom for the most European LC Medals ever by a female. Archive photo via Alfredo Falcone - LaPresse

Hungarian swimmer Katinka Hosszu further cemented her legacy on Thursday at the European Aquatics Championships by taking a silver medal in the women’s 200 meter butterfly final.

That swim gives her 23 total European Aquatics Championships medals, which ties her with Sweden’s Sarah Sjostrom as the most ever won at the meet. With 15 gold medals, ahead of Sjostrom’s 14, Hosszu is now the most-decorated swimmer ever at these championships, and she still has the 200 IM to come. Hosszu has won the last 5 European Championships gold medals in that 200 IM, and is the top seed in the event by over two seconds, so she will likely break her tie with Sjostrom for the most medals during that event.

After winning the silver medal today in the women’s 200 fly, Katinka Hosszú became the female swimmer with the most medals in the history of Euro Aquatics Championships. She has won 23 medals since 2008, tied with Swedish Sarah Sjöström. Hosszú, however, has won more gold medals. pic.twitter.com/7yWRH9wBEG

Hosszu has another 26 medals at the European Short Course Championships, including 20 gold – which makes for a grand total of 35 career European Championships so far. Her Short Course podium career began in 2004 at 15, though it would take 8 years, until 2012, for her to win another.

Also among Hosszu’s resume are 9 World Championships and 3 Olympic gold medals from Rio in 2016.

Alexander Popov leads all male individual medalists with 26, while Hosszu’s countrymate Laszlo Cseh, also racing at this meet but who so far doesn’t have any medals, also has 23 European medals in long course.

Shows you just how uncompetitive the Euro champs meets are.

I agree, similar to how phelps showed that the olympics are a joke!

the amount of people that dont understand sarcasm…

2
-4
Reply
There's no doubt that he's tightening up

Popov with 26 medals despite only racing two individual events!!

I’m so disappointed : no iron mask, just a piece of old cloth. 😀
Pellegrini was also the second today and much closer to the gold medal than “iron” …. and nobody get that much excited despite the honor she deserves indisputably. But Hosszu,oh yeah! The greatest of the greatest with her kilos of worthless medals and cheap prize money won against below “B” level swimmers.
Is it the truth that you forgot about her and wanted me to repeat for you? Then take it. For free. I’m in the good mood today 😀
And I agree with Ol’ long horn – the legend 😀 No need to say it again. Save your breath.

Hosszu is second on the list for individual female gold medalists (9) at the FINA World Aquatics Championships.