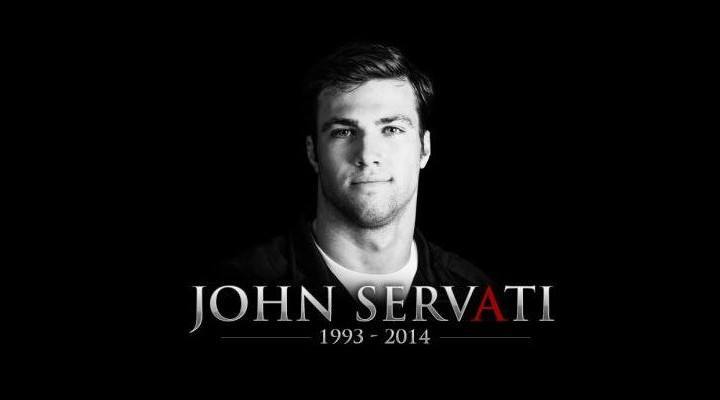 Upon hearing of the tragic news of the passing of his once-teammate John Servati, former Alabama Crimson Tide men's swimming and diving captain Jake Reynolds took the opportunity to share some thoughts on his fallen friend. Current photo via University of Alabama Athletics Department

Upon hearing of the tragic news of the passing of his once-teammate John Servati, former Alabama Crimson Tide men’s swimming and diving captain Jake Reynolds took the opportunity to share some thoughts on his fallen friend.

I think we all often contemplate our own legacy. “How will I be remembered?” we ponder. “How will I leave my mark?” John Servati is one person whose legacy supersedes his life.

I had the pleasure of meeting John in the summer of 2011. He was an incoming freshman while I was an upcoming junior. John decided to enroll early as to get a jump-start on his training and academic work. He needed a place to live. I needed a roommate. My first impression of John can be summarized in an image that is burnt into my brain: I walk into my apartment after he had just moved in. He was laid back on our couch with his feet propped up on the coffee table, a freshly mounted 12-point buck hung slightly crooked on the wall behind him. He had a chiseled jawline as if sculpted by Da Vinci himself, crest white teeth that could light up a small village, and blue-marble eyes that, in tandem, could AND DID melt every heart on the entirety of Alabama’s sorority row. Needless to say, John was a happy-go-lucky, handsome fellow. When he first arrived at UA he couldn’t tell right from left, but all he knew was that he had definitely arrived.

Over the coming years I quickly watched John grow into a fierce competitor, passionate teammate, and a social butterfly. John had an insatiable thirst for learning and a natural ability to teach. He could tell you everything there is to know about deer hunting, and if you let him he would do so for hours on end. He was a rather curious and inquisitive guy and you could almost always find him tinkering with tools and the like. John deeply appreciated guidance and always sought to be mentored. Though, he was very self-sufficient and was a master of many crafts, including: woodwork, marksmanship, auto-mechanics, and anything outdoors related. He had a strong moral compass and a heart for people. He was always there when you needed him and was the go-to guy when it came to fixing anything. John was well known and well liked. Anytime you met someone new at Alabama and they found out you were a swimmer their first question was always: “Do you know John Servati?” He was never afraid to open-up about himself and was deeply in tune to other people’s feelings.

But most of all John understood brotherhood. He longed for connection with his teammates and every person on our team understood that about him. He coined the nickname the “bruisers” for the mid-distance backstroke/freestyle group; of which, the members wear “bruiser” wristbands that John got for the group.  He often expressed his plan to become a Navy SEAL after college; a role very fitting for John Servati. As the details have unfolded we have come to learn that John passed away while protecting his girlfriend from the storms that battered much of the Southeast. And while I am disturbed, saddened, and shaken to learn about John’s premature passing, I am not at all surprised with the courage, integrity, and loyalty he displayed in his self-sacrifice. That’s just the type of guy he was.

Upon speaking to my former teammates, I asked many of them “what will you remember most about John?” Some joked about his carpal crushing handshake and his infatuation with the outdoors, while others remembered his enormous smile and yet his terrifying competitiveness (especially on relays). Though most expressed that John embodied everything good about a southern gentleman wrapped into one person: loyal, carefree, simple, authentic, steadfast, and loving.

John Servati did not let swimming define who he was. Better yet, he defined swimming through the type of teammate and competitor he was. While John’s legacy is cemented in Crimson and White, it extends far beyond the University of Alabama and far beyond swimming. John’s legacy is intermeshed in every life he touched and every person he graced with he smile. The sport of swimming and the University of Alabama just happen to be better because of John Servati.

Ultimately, John had two dreams in life: to swim for the University of Alabama and to be a hero. He accomplished both.

Below, Jake shared some of his favorite pictures of John.

My heart aches for His immediate family and for his swim family. May God give you all comfort during this time. What a beautiful tribute to an outstanding swimmer, son, brother and friend. From one swim parent to another, I am so sorry for your loss Mr. and Mrs. Servati. Praying for you deeply.

God be with you and I am very saddened by your loss. It seems he was a wonderful young man. (From a former AU gymnast)

I am deeply saddened by this tragedy. My thoughts and prayers are with his family and friends. I am so sorry for the loss of this wonderful young man.

A really nice tribute. Thank you for sharing.

Thank you Jake. I remember dropping him off that first day. Thank you for the friend you were to my son.

I remember that day so well. John was a great, loyal friend! I’m so sorry for your loss. My heart breaks for you and your family.

God Bless your family during this time.

Mr Servati,
You clearly instilled great values in your son for him to lay down his life for another person. I am so sorry for your family’s loss.

Mr. Servati, please accept my family’s condolences on your loss. I wanted to share with you a brief conversation I had with my son this morning when I told him about the horrible accident. He is an 8yo swimmer with SwimMac. I first told him that your son was a swimmer at Alabama and he was protecting his girlfriend when he lost his life during the storms. My son replied, “So he was doing the right thing?” I said yes, he was. After thinking about it for a few seconds, my son said, “Daddy, it sounds like he was a really great guy.” I agreed with him. Again, our condolences.

Charlotte and I were so heartbroken to hear of John’s death. You are all in our prayers.