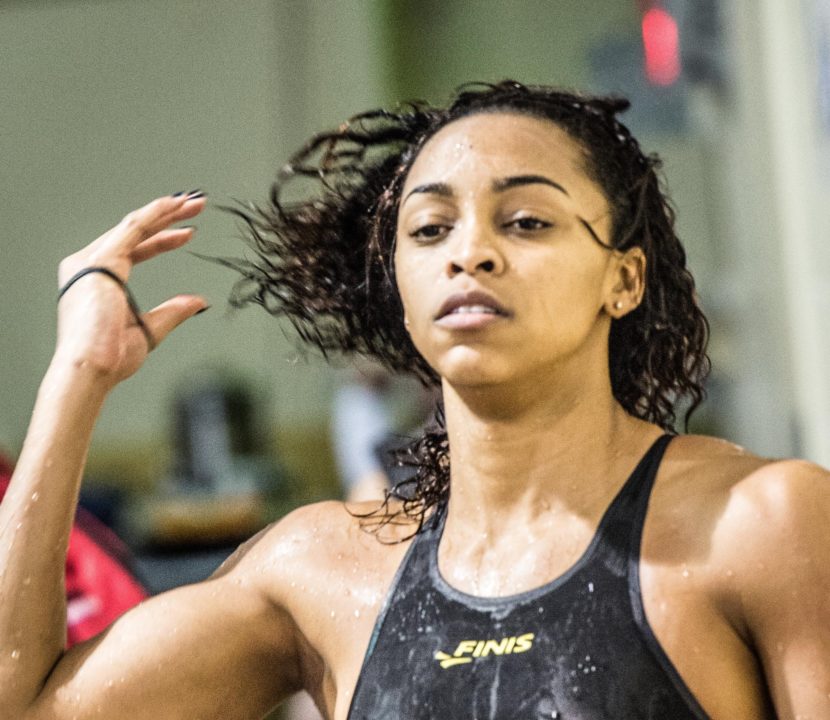 “I’m very excited to be a part of team FINIS,” Vanderpool-Wallace said. “I look forward to growing as a swimmer with FINIS by my side.”

Vanderpool-Wallace is a former NCAA Champion at Auburn and the holder of the U.S. Open Record in the 100 yard freestyle at 46.61 – which means that she is the fastest woman ever over that distance.

Vanderpool-Wallace is the daughter of a Bahamian politician, and came to the United States to advance her training in high school at the famed Bolles School in Jacksonville, Florida. She had a breakout season as a junior, where she broke Natalie Coughlin’s all-time best in the 100 yard free, and also broke the SEC Record in the 50 free. She would sweep the 50 and 100 free titles at NCAA’s that year, and would repeat that 100 yard title as a senior.

She’s also a two-time Olympian representing her native country, and in 2012 made the final in the 50 meter free, where she placed 8th. Her biggest international medal came from the 2010 World Short Course Championships, where she earned a bronze.

“We’re very pleased to have Arianna become a part of our team,” says FINIS CEO, John Mix. “She is an amazing talent with a bright future ahead of her. She is training with some phenomenal athletes and is putting in the work that makes that little bit of difference in the sprint events. We’re excited to see what is to come, the sky is the limit.”

Vanderpool-Wallace is the second Olympic finalist for a Caribbean nation to sign her first suit sponsorship this week, after Alia Atkinson of Jamaica landed a big deal of her own announced on Tuesday.

“I think it’s really exciting to see that the sport is growing in the Caribbean, and I think it’s great to see swimmers there getting faster and being recognized by great companies like FINIS,” Vanderpool-Wallace said. “In the last few years, in addition to my competitive swimming, I’ve realized that I have an opportunity to have a big social impact on the Bahamas, where there’s water everywhere and so many people still don’t know how to swim. Now with FINIS supporting my growth as an athlete, I hope to really be able to grow my impact on this cause that I’ve become very passionate about as well.”

FINIS is a SwimSwam partner, however this post was not paid for.

So proud of this Bahamian

Awesome! Arianna. Congratulations and may you simply get better and blessed as your swimming career blossoms. Your family and the Bahamas is proud and will always support your efforts.

Congratulations Arianna-you have always made your FAMILY and the BAHAMAS VERY PROUD! May you always continue in the direction of your dreams and passion!