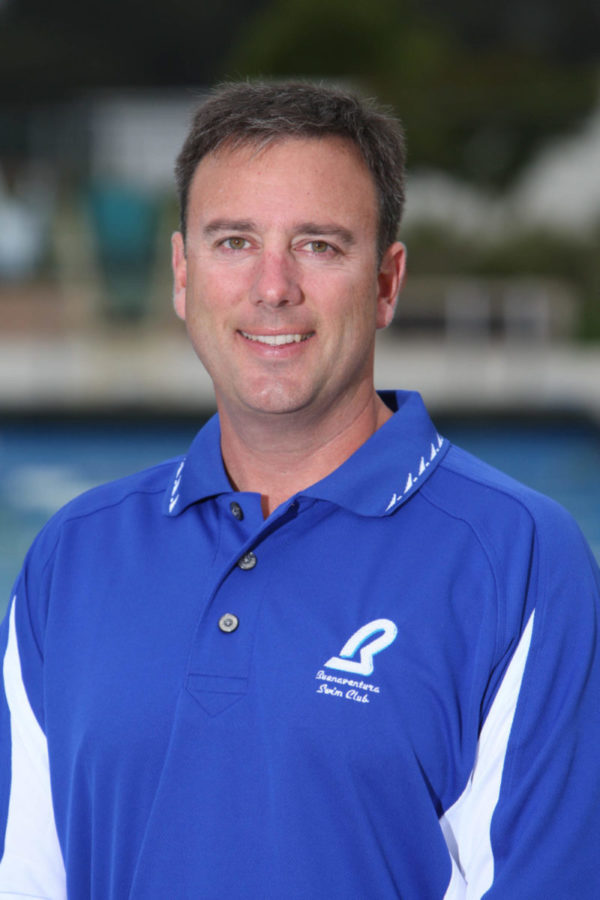 San Clemente Aquatics Swim Team (SCAT) has announced the hiring of Jason York as their new head coach. York is stepping into Goran Westerlund’s former role, after his planned retirement which was announced in August.

York has been the head coach at Buenaventura Swim Club in Southern California for the past 13 years. During that time, the team earned the Silver Medal Club status whose requirements can be seen here. Buenaventura Swim Club also trained National Junior Team member and 2014 Junior Nationals 100 fly champion Alex Valente. The team sent several swimmers to Olympic Trials including Solie Laughlin and Valente in 2016, who were the first Olympic Trial swimmers from BSC since 2000.

Jason York at the LA Invite – courtesy of Brigid McNally

Before Buenaventura, York coached at the renowned Santa Clara Swim Club for 7 years, bringing his total coaching experience up to 21 years.

During his own swimming career, York competed in distance freestyle events and swam the 800 free at the 1992 Olympic Trials in Indianapolis.

In a press release, SCA President of the Board of Directors and retired French Olympic swimmer Yann de Fabrique explained that “Jason was special and really stood out” during the interview process of their nationwide search for a new head coach.

“He has energy, enthusiasm and passion for the sport balanced with maturity and strong technical skills making him the ideal candidate to lead our club into its next chapter,” de Fabrique said.

“We feel our team has the capacity to both grow its membership and achieve more swimming success on a national scale.”

San Clemente Aquatics Team is an IM-focused program located in San Clemente, California, the southernmost city in Orange County. The “Spanish Village by the Sea” is home to 65,975 people according to the San Clemente Departments and Services. SCAT’s 50 meter pool, built in 2011, is the training ground for 200 athletes of all age groups.

“We are a very family oriented town here in San Clemente and our team will continue to serve the varying requisites for all age groups…We are looking to improve our programs across the board…and Jason is the type of Coach to lead us there,” said Sarah Schneider, Communications Director, Board of Directors.

Schneider also wrote to “look to Mr. York to further bolster his coaching staff in the near future with some new hires, in addition to retaining existing staff.”

SAN CLEMENTE, CA, September 21, 2020 – San Clemente Aquatics Swim Team, led by the San Clemente Aquatics Hiring Committee is thrilled to announce the hiring of Mr. Jason York as the new Head Coach. Mr. York’s appointment comes after the planned retirement of prior Head Coach Goran Westerlund and a national search for his replacement.

A student-athlete graduate of the University of California, Santa Barbara and a former competitive swimmer, reaching the 1992 Olympic Trials in the distance freestyle event, Mr. York brings a wealth of skills and experience to San Clemente Aquatics (SCAT). He began his 21 year coaching career at the ultra-competitive Santa Clara Swim Club after which he pivoted to a Head Coach role at the Buenaventura Swim Club in Ventura California, where he has coached for the past 13 years. In his tenure at Buenaventura, he grew the club’s footprint enormously garnering Silver Medal Club status along with other accolades including a summer Junior National Champion and numerous Championship finalists, a National Junior Team member and several Olympic Trial swimmers.

“It was clear to the Hiring Committee from the beginning of our interview process that Jason was special and really stood out. He has energy, enthusiasm and passion for the sport balanced with maturity and strong technical skills making him the ideal candidate to lead our club into its next chapter,” says Yann de Fabrique, President of the Board of Directors.

Currently serving around 200 swimmers, and home to a beautiful, recently built (in 2011) city-owned 50 meter aquatic complex, SCAT believes it is well positioned for growth. Mr. York’s addition to the team allows for South Orange County swimmers to train at the highest levels without having to commute. “We are fortunate to have so much swimming talent in South Orange County, by hiring top notch coaches, we feel our team has the capacity to both grow its membership and achieve more swimming success on a national scale,” says de Fabrique.

“We are a very family oriented town here in San Clemente and our team will continue to serve the varying requisites for all age groups from casual engagement all the way through to competitive swimming. We are looking to improve our programs across the board to ensure we are serving our community’s needs and Jason is the type of Coach to lead us there,” says Sarah Schneider, Communications Director, Board of Directors. Look to Mr. York to further bolster his coaching staff in the near future with some new hires, in addition to retaining existing staff.

San Clemente Aquatics is a USA Swimming, parent led Board of Directors club in San Clemente, CA. SCAT emphasizes quality in coaching and challenging individual training. This gives our athletes the opportunity to develop a strong work ethic, life skills as well as athletic ability and a positive healthy attitude to achieve their highest potential in a safe environment. San Clemente Aquatics is an IM based program (butterfly, backstroke, breaststroke, freestyle) utilizing the latest training methods applied to the developmental stages in a swimmers career.

Jason will be very much missed at BUEN. I can’t that him enough for what he’s done for the Laughlin girls. Memories I will cherish

Best of luck in a toxic culture of a parent board and office manager that is bad news for the staff and swimmers. Reach out to the old coaches that are not around any longer and see whats up.