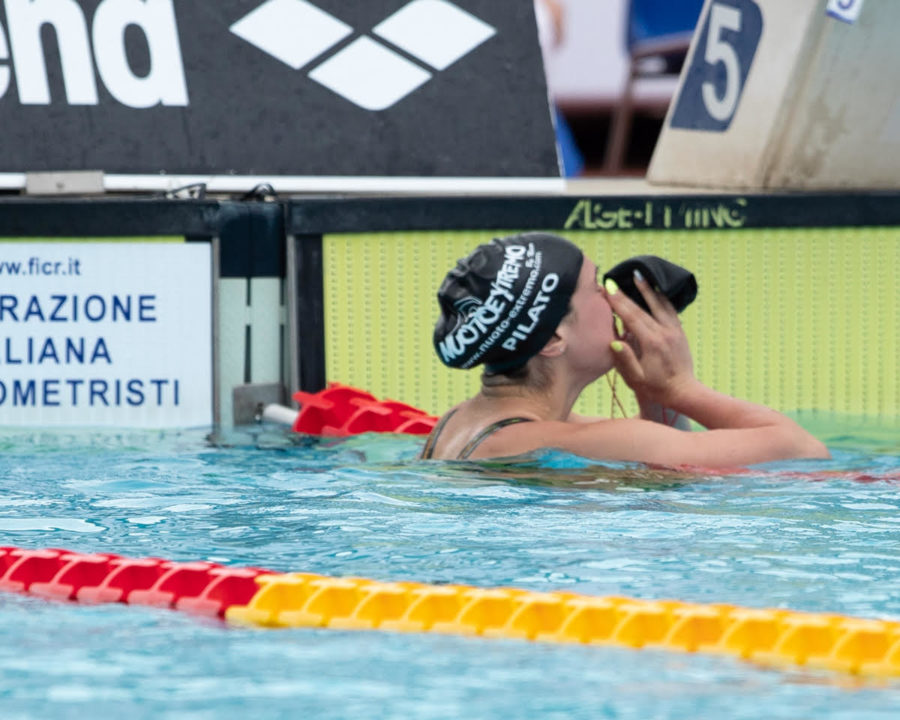 Take a look at the various national age records that went down on the final night of competition of the 2019 European Junior Championships.

17-year old Artem Selin swam one of the fastest U18 50 frees in history on Sunday at the European Junior Swimming Championships.

Check out the final medal and points trophy standings from the 2019 European Junior Championships that just concluded in Kazan, Russia.

The 2019 European Junior Championships kicked off in Kazan today, with over 500 swimmers representing 42 different nations racing their way to medals and records at the Aquatics Palace.

Male athletes aged 17-18 and female athletes aged 15-16 are eligible to compete for the European nations, with heats beginning at 9:30am local (2:30am EDT) and semi-finals/finals getting underway at 6pm local (11am EDT) each of the 5 days of competition.

The men’s 400m free saw 3 Russians produce times among the top 8 competitors, but only 2 from a single nation can move on to the final. Aleksandr Egorov is the man to beat, producing the only sub-3:50 time of the morning of 3:49.24. He’s joined by countryman and #2 seed Nikita Danilov, who was just over a second behind in 3:50.50.

That left the 3rd Russian Ilia Sibirtsev and his time of 3:51.49 out of tonight’s final.

Swiss dynamo Antonio Djakovic is right in the mix with a morning effort of 3:50.99, just off his own personal best of 3:49.27 logged earlier this year.

We knew 14-year-old Benedetta Pilato of Italy would put up something strong in the women’s 50m breast based on how she’s been on a roll this past few months and the teen didn’t disappoint. While competing in this morning’s prelims, the World Championships-bound teen already fired off a big-time 30.22 to crush the heats competition and establish a new Championship Record.

Pilato’s quickest time entering this meet is the 30.13 Italian National Record she produced at the Sette Colli Trophy to sit as the 3rd fastest swimmer in the world this season. Based on her outing already this morning, that mark is very much in jeopardy as she’s only .09 away with 2 rounds to go.

The next closest competitor in the 50m breast this morning was Russia’s Anastasia Makarova who was well behind in 31.47.

In the men’s 50m fly it was Germany’s Luca Armbruster who claimed the top spot for tonight’s semi-final, hitting the wall in 23.71 as 1 of 3 men under the 24-second threshold. Lurking as the 5th seeded swimmer is Russia’s Andrei Minakov, who casually knocked down a morning effort of 24.02.

For Armbruster, his time checks-in as his fastest ever and overtakes his own previous German Age Record for 18-year-olds of 23.78.

Dutch teen Kenzo Simons, the top seed in the 50m free here, is among the semi-finalists, claiming the 7th seed in 24.30, while British standout Matt Richards will also make an appearance in the men’s 50m fly semi-final tonight, taking the 9th position in 24.39. That’s a personal best for the Brit by over half a second and matches World Champion Ben Proud’s Age Record for 16-year-olds.

The men’s 100m back looks to be ultra-competitive, with 2 men already dipping under the 55-second threshold. Nicolai Zuev reaped the top spot in 54.73, followed by Frenchman Mewen Tomac in 54.97. Tomac’s PB entering these Championships rests at the 55.11 he produced last December, so the teen is already hitting a new milestone with his first 54-point.

Youth Olympic Games multi-medalist Thomas Ceccon is just biding his time, however, as the 3rd seeded swimmer in 55.02. He owns a PB of 53.60 in this event, the only sub-54 of the entire incoming field.

Spaniard Alba Vazquez put up the fastest time of the morning by over 3 seconds in the women’s 400m IM, taking the top seed in 4:44.47. Behind her is Freya Colbert in 4:47.49, while Hungary’s Viktor Mihalyvari will also flank the leader in 4:47.96.

Look for British swimmer Katie Shanahan to make a move tonight, however, as the 14-year-old has already been as fast as 4:46.62 this year, a time that took over 3-time Olympian Hannah Miley’s Scottish Age Record.

Shanahan also took on the women’s 200m back this morning, where she finished 11th in a time of 2:15.95. That would have been good enough to make the semi-final, had her teammates Honey Osrin and Pia Murray not snagged quicker times to take up the 2 national spots. Osrin ranks 6th in 2:14.38, with Murray right behind in 2:14.56.

But it was Isreali swimmer Aviv Barzelay who led the women’s 2back charge, hitting the wall in 2:13.01 to sit .15 ahead of Hungarian Eszter Szabo. Pole Zuzanna Herasimowicz is also ready to rumble tonight in the 3rd spot in 2:13.26, while Austria’s Lena Grabowski also produced a sub-2:14 morning effort of 2:13.96.

Bottom line, both men swam lights out this morning, destroying their previous personal bests that were in the 2:14 range coming into these Championships. Marchand entered Kazan as the 8th seed in 2:14.45, while Corbeau entered as the 5th seeded swimmer in 2:14.07.

I think in women’s 200 fly and women’s 100 free the 3rd best athlete didn’t make the next round because two other athletes from the same nation were faster … pretty cruel. I think the championship record in women’s 4 x 100 free should go down tonight (although the scheduling is complete nonsense … who the hell thought that it would makes sense to have 100 free and the 4 x 100 free relay on the same day?) + maybe the championship records in men’s 50 fly, men’s 200 breast and women’s 200 fly are also in danger.

Also encouraging time for Gose (not sure if she planned to peak here or at the world championships), hoping for sub 55 tonight (although she has a history of not improving (much) in semifinals/finals) and sub 1:58 later this week.

The scheduling has been pretty much the same for the last decade. Not sure why the 100/4×100 clash, but they always do on day 1.

Where to watch this competition?

The link is in the article titled LiveStream

Pilato was mightily impressive. Not the most pleasing stroke to watch, but it’s clearly effective – She looks extremely powerful. The Russian backstroker, Zuev, looks like he can go a lot faster than 54.7 tomorrow – He almost negative split his race (27.35/27.38). Caught my eye in the relay; Whittle anchored in 49.79 with a 0.62 takeover. Could we see a 14 year old go sub 50 this week…