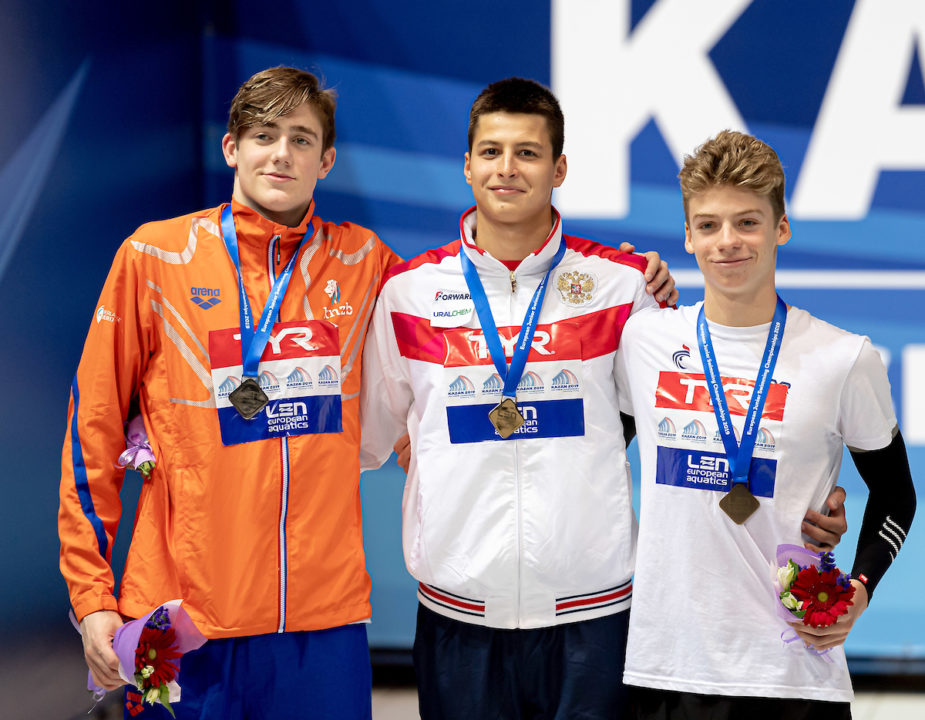 17-year-old Léon Marchand has made his mark on the French age group record board this year, but is also steadily breaking into the European ranks. Archive photo via G.Scala/Deepbluemedia/Insidefoto

The nation of France is rejoicing in the fact that Olympic champion Florent Manaudou has made his return to swimming, with the sprint monster having joined the ISL Energy Standard squad after dabbling in handball. The country is also carrying a legitimate gold medal hopeful into the World Championships that kick-off this week in the form of Mehdy Metella, with the fly maestro owning the #2 time in the world in the 100m sprint.

Beyond the aforementioned, however, only David Aubry, Charlotte Bonnet, Marie Wattel and Fantine Lesaffre appear among the world rankings for 2019 across, with just Aubry making more than 1 appearance.

Looking ahead, an emerging talent bubbling beneath the surface in France is 17-year-old Léon Marchand, the teen who is making moves on the national age record books, but who is also starting to make a name for himself internationally as well.

Marchand had a breakthrough French Junior Nationals meet in April, producing multiple personal bests across several events, including the 200m breast, 200m fly and both IM distances. Just over 2 months later, Marchand one-upped himself with huge performances in Kazan to land on the podium twice at the European Junior Swimming Championships.

Entering Euro Jrs, Marchand’s personal best in the 200m IM rested at the 2:01.22 age record he established at April’s Junior Nationals. However, the teen found a way to drop that down to 2:00.66 in the semi-finals, ultimately finishing just off the podium in Kazan in 4th with a time of 2:01.14.

Marchand holds personal bests of 53.70 in the 100m fly and 1:58.60 in the 200m fly as well, which rank the Frenchman 10th and 4th among 18&U in Europe this year, so the teen has proven his versatility and ability to be competitive in multiple disciplines.

Cool article. I love these features on up-and-coming swimmers- lets us know who to look out for.