Katie Ledecky’s Willingness to Fail is Her Greatest Talent 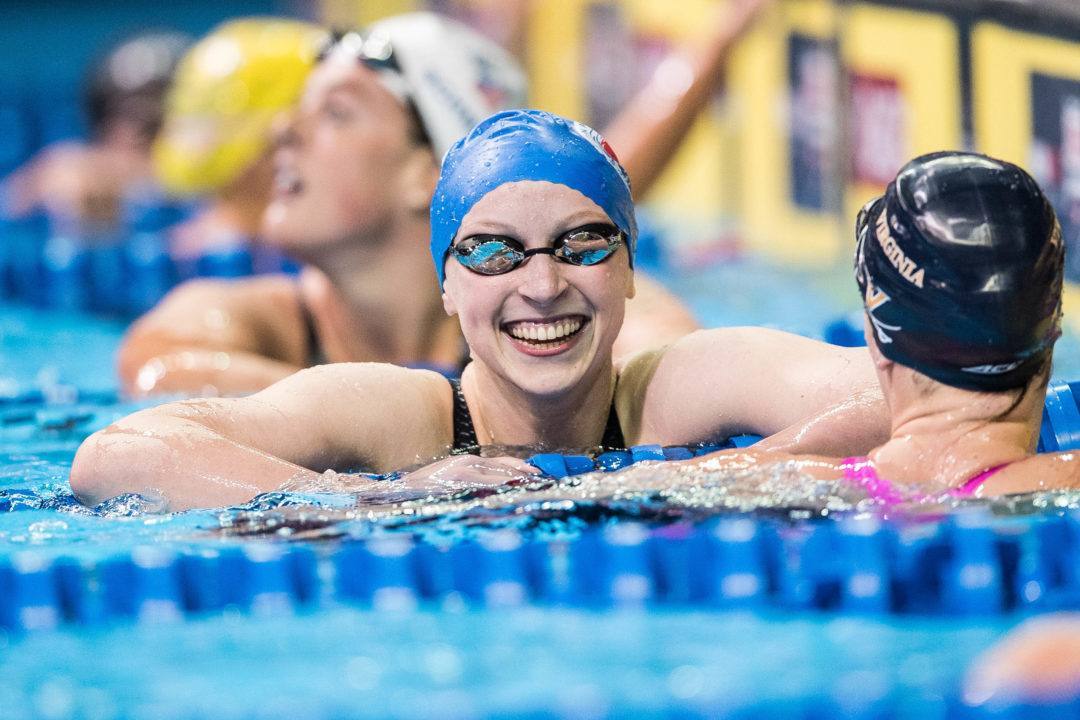 When Katie Ledecky stepped up on the blocks in Rio, she had "failed" her way there. Here's how swimmers can be more willing to chase failure in practice. Current photo via Mike Lewis/Ola Vista Photography

A Swim Practice to Help You Develop Legendary Closing Speed

This swim practice is designed to give you the endurance to come back strong on the back half of your races. Let’s get after it.

That big swim meet that happened in Brazil a couple years ago?

There were some big performances and results.

And of course, Katie Ledecky running roughshod over everybody.

If you watched the meet that week, you were witness to Katie Ledecky taking the women’s freestyle events and make them all clean and fold her laundry.

And during the events you heard commentators, analysts and anyone with a microphone talk about how special she is.

How talented and gifted she is…

How her technique is 12% more efficient, and this, that, and the other thing.

But there was one thing they didn’t talk about.

And that’s because it’s doesn’t fit into the vignettes and narratives of Olympics coverage.

After all, we lionize these swimmers to the point that they might as well be from outer space.

But if you read about her backstory, you will come understand that there is a “gift” or “talent” that Ledecky has that has nothing really to do with being talented or gifted.

Katie is willing to fail in the pursuit of her goals.

As a six-year-old, at a local meet, Ledecky competes in a 25-yard race. Several times over the course of a the one-lap race she stops to hang on the lane rope and catch her breath.

She struggles to complete the race, and when she does, her dad has a video camera to capture:

“Tell me about your first race. How was it?”

Her coach at NCAP, Bruce Gemmell, later recounts this story, noting that this is the attitude she has with training and competition to this day.

For Ledecky, hard work is in itself the reward.

“Her strength is not in any physical attribute,” says Gemmell. “It’s not even in any particular technique. It’s her overwhelming desire to do what she needs to do to get better.”

Without something concrete to measure it’s a bit open ended.

Our coaches, parents and teachers have all told us over and over again that hard work pays off. It’s implied that if we work hard good things will happen.

For Ledecky, it’s not enough to work hard, it’s about being willing to fail, to push herself to the point of failure over and over again and not get discouraged.

Although this might sound simplistic, a lot of athletes have a really hard time with doing this. It’s  mentally and physically exhausting to push and stretch ourselves consistently to a breaking point.

It requires leaving your comfort zone, to push yourself beyond what is normal or familiar, and it is just as tough mentally to do so as it is to do so physically.

“There are days she fails catastrophically,” says Gemmell. “She fails in practice more than anybody in her [training] group, because she’ll start out like, ‘This is the pace I need to swim in the race, so I need to replicate it in practice.’ And she’ll go six repeats like that, and the tank goes empty and she just falls off. But you know what? She’ll come back the next day and try it again. And on the third day, she’ll nail it. And she’s been doing this since the first day I walked on the deck with her.”

Mental toughness is sharpened at practice

For most swimmers the idea of being mentally tough is something they only really think about during competition.

But to gain the kind of durability and confidence in competition you need to have invested the hard work and challenge in practice.

You need to be willing to run face-first into failure at practice over and over again.

Ledecky’s competitive fire is visible in competition, but what helps distance her from the competition is bringing that competitive rage to practice each day.

“You look at Katie, just like with Michael, and you realize the differentiator is between the ears. And their hearts. Their appetite for competition, their unwillingness to lose, and their embracing the challenge. And not just the challenge on competition day, which is a huge part, but the challenge of the training grind,” says Gemmell.

Very few of us will ever experience the dizzying heights of success that Ledecky has attained. She could retire today and go down as one of the greatest ever.

But we can take some of the mental approach that she uses for our own goals in the pool.

Set challenging goals for yourself in training.

It’s not enough to have big goals for the season—that’s the easy part. Have goals for training, a specific race pace or stroke count, for example, and hammer away at them until you master them. And when you do, set yourself a new, more challenging bar to rise towards.

Don’t back away from challenges.

Your training program should ask more from you. Not just your best, but a shade more. Failing is what practice is for. Sure, saying that you won’t back down from challenges is practice is easier said than done, but the kind of resilience you develop is championship swimmer material.

Be competitive in practice.

Some swimmers seem to be just born to have that racer’s edge. And while some swimmers come by it more naturally than others, it is something that can be developed in practice.

Be competitive with yourself and with your teammates in practice. Not only will this foster an environment in training that demands the best of everyone, but it will help hone the competitive instinct that will come in handy when you are stepping up on the blocks.

Be willing to look a little silly.

Failing on an interval or a set is rarely pretty.

Getting to that point hurts.

Our technique is starting to fall apart, our legs feel like cement, our lungs are yelping for air.

For the perfectionist swimmer, the athlete who has big goals and dreams and expectations, they want the success without the struggle or failure that the big goal demands.

But fast swimming on race day looks easy and pretty because it was hard and ugly a hundred times over in practice. Don’t fear looking silly, weak, or even stupid—push things at the pool.

At the end of the day, the foundation of Ledecky’s success isn’t extra-terrestrial (even though her times sure are).

Gemmell is adamant that there isn’t any secret sauce, or magic trick, or silver bullet.

“Just do the damn work,” is his advice.

So true, so true

Aren’t you confusing “training to failure” with a willingness to fail? Two very different things.

I’d say her endeavors in the 200fr are evidence of being willing to fail. She’s not the prohibitive favorite, she’s been beaten in it, yet she continues trying. Phelps did the same, picking up events that he could be beat in, and seeing how far he could go. If that doesn’t count as “willingness to fail” I don’t know what does.

Although that does imply getting anything less than 1st is failure, in which case my entire swim career was a failure lol.

I think repeatedly training to failure involves a certain willingness to fail, don’t you? I’ve known a lot of good swimmers who let their egos get in the way in training and want to win every set. They don’t want to be “embarrassed” by failing hard and losing to the people around them. But the best competitors understand that being willing to experiment and fail at those times is the key to succeeding when it matters most.

I think the point being made is that she sets high goals, and then is not discouraged when she doesn’t meet them immediately. Contrast that with the swimmer who sets a pace goal, tries it for a practice, and then says something to the effect of “how am I supposed to hold that in a race? there’s no way!” She embraces failure as the necessary foundation for any meaningful accomplishment.