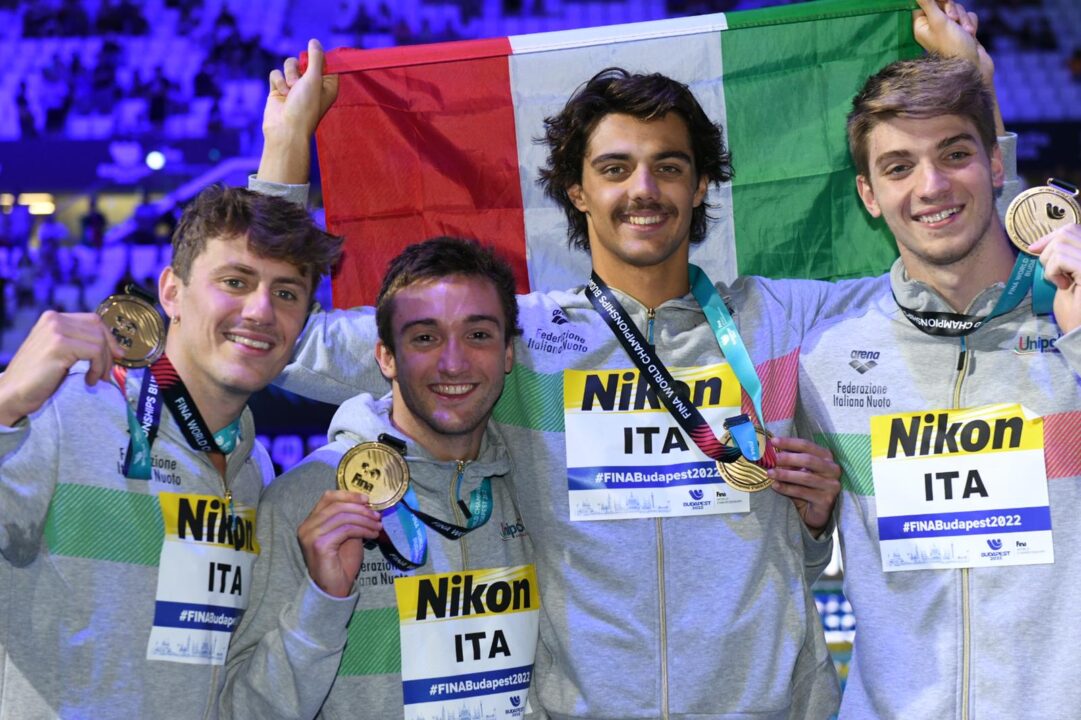 Italy won their first World Championship relay title on the final night of Budapest 2022, upsetting the U.S for gold in the men's 4x100 medley. Current photo via Fabio Cetti

History of Italian Relay Medals at the World Championships

They finally claimed the top step of the podium in spectacular fashion, equaling the European record that Great Britain set at the Tokyo Games.

Thomas Ceccon led off the relay, clocking 51.93 on the backstroke leg to put the Italians in the lead. They led at each exchange, with Ceccon and 100 breast champ Nicolo Martinenghi widening the lead, and Federico Burdisso and Alessandro Miressi holding on for the win.

Ceccon’s time makes him the third man (along with Ryan Murphy and Evgeny Rylov) to go under 52 seconds at least twice. This medal also brings him up to a total of four at this Worlds, making him the most decorated Italian at a single World Championships.

These four Italian men have made big improvements over the past couple years, which was on display here. This is the same quartet that took bronze in Tokyo. Ceccon, Martinenghi, and Burdisso all dropped from their splits while Miressi was .01 off  as they traded in Olympic bronze for Worlds gold.

The relay win caps off an incredible Worlds for the Italian team. On the final day, they won three more medals (two gold, 1 silver) to bring their medal count up to 9. That’s the most medals they’ve won at a single Worlds, surpassing the 8 they won in 2019. Nicolo Martinenghi highlighted Italy’s strong performance, saying that “before the race we said that Italy had a perfect championship, and we should finish it perfectly as well… as a team we did really well, I’m really happy for everyone, here friendship comes first before being teammates. That’s why it feels so good to share this gold with my friends.”

Other National Records on Day 8

I don’t understand why this was such a massive upset?

You have the WR holder in the back, the winner of the breast, and a freestyler who’s split 47.50 this week (split 47.48 in this swim). Murph was off, but our middle 2 swimmers did great, and held was a little off, but not much. If we’re going to say Burdisso was totally unexpected and all the predictions had him going 51 mid instead of 50., then fine, but this race was going to VERY competitive no matter what, if not dead even on paper.