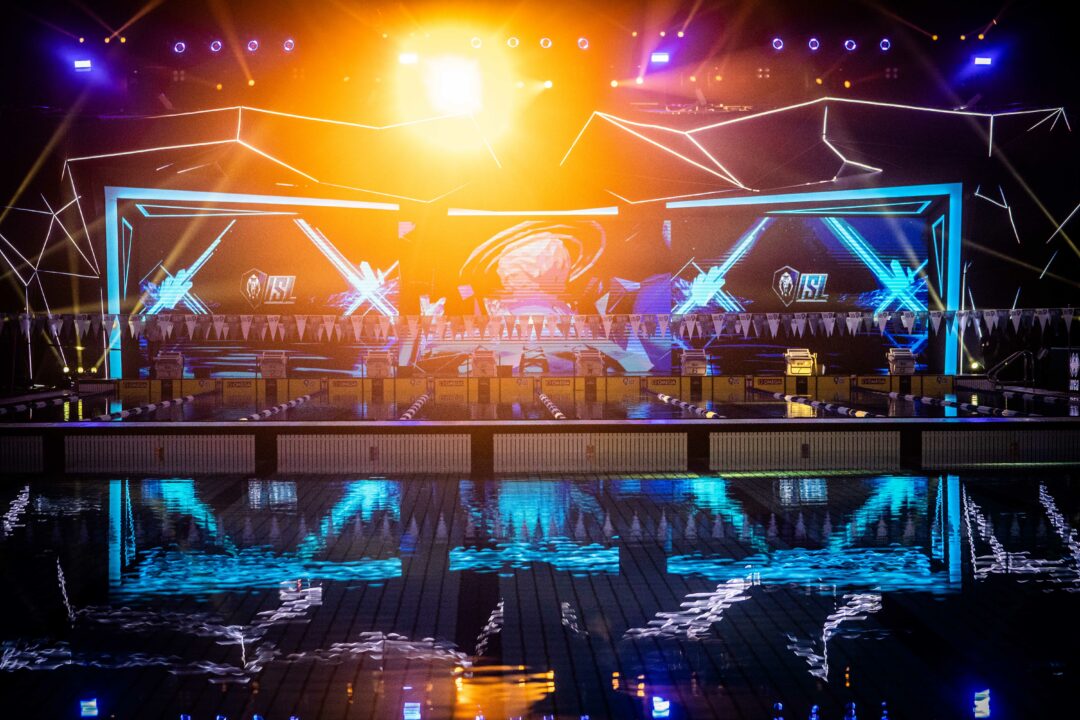 The ISL had a number of new rules ready for a 2022 rollout before the season was announced, including a radical one involving stroke infractions. Stock photo via Mine Kasapoglu/ISL

UPDATE: It turns out, this rule change was never real, it was just an April Fools joke! We think. We’re pretty sure? Sometimes it can be hard to tell…

After the International Swimming League (ISL) canceled its 2022 competition season, postponing Season 4 to 2023, a source close to the league has leaked a list of proposed rule changes that were going to be enacted for 2022.

Among the most significant changes was a new approach to disqualifications. The new rule reads, in part:

The change came in light of a momentum-swinging disqualification in last year’s ISL finale in the women’s 400 medley relay. There, Cali Condors breaststroker Lilly King was disqualified for a non-simultaneous touch, which resulted in a direct 50 point swing with Energy Standard, and likely a bigger swing as a result of not having the final choice for day 2’s skins competition. Energy Standard wound up winning the meet by 12 points.

The call, which resulted in the most-read ISL content ever for SwimSwam, was questioned by skeptical fans who struggled to see a clear violation on video replays. Some athletes called into question the integrity of the league making a call that so substantially benefited the primary team of league founder Konstantin Grigorishin, while others said that the punishment for such a minor infraction was too big.

An anonymous league source told SwimSwam that the rule change was made in order to enhance the league’s innovation and further differentiate the product from FINA competitions.

SwimSwam asked FINA whether this would impact their acceptance of records from ISL meets. A spokesperson was noncommittal, saying that “To be considered for world records, meets must be raced in compliance with FINA rules. FINA evaluates the sanction of meets when proper sanctioning paperwork is received from national federations, and evaluates all records for compliance with the rules upon receipt of documentation.

Other rules changes that were slated for the 2022 ISL season included doing a medley relay skins race, allowing women’s relays to steal points from men’s relays that swam slowly enough, and adding 25 meter and 75 meter freestyle races to “enhance the excitement that comes with more sprint competitions.”

A new draft format for 2022 would have employed a matrix where the draft order was to be updated in real-time based on previous selections. Each pick would be assigned a certain number of “DQPs” or “Draft Quality Points” based on both best times and marketability of athletes (social media following, image, etc.). Teams that did a better job of drafting, according to the algorithm, would have the opportunity to move up in later rounds of the draft, and individual athlete salaries would be tied into their DQP ratings. Those DQPs would be rated to the public based on a system of amulets ranging from a green toad at the bottom end to a purple peacock for the highest-rated selections.

The league spokesperson said that more information would be available in coming months.

“We plan to release any updated rules for Season 4, along with payments for Season 3, the meet schedule, team rosters, and a television clearing list in the coming weeks between now and the end of Season 4,” the spokesperson said. “(League founder and financer) Konstantin (Grigorishin) continues to receive only positive feedback from athletes about the innovation and excitement of the ISL, and we look forward to providing more innovation and excitement in future seasons of the ISL.”

The last paragraph – “…between now and the end of Season 4”. Very accurate, would be hilarious if they just admitted it up front.
“continues to receive only positive feedback from athletes”… Good stuff.

So, if true, seems that a 5 or 6 second early relay take off for a 1 second penalty is a good strategy.

The real April Fools joke is the “Lochte rule”.

With all of the “unique” ideas the ISL comes up with, this is a fairly believable article for those who are not so totally engrossed in the swimming world.

I initially only saw the headline and though oh ISL making dumb rules again.

I was gonna express my disagreement until I read the comments 😳

Considering the ISL itself is an April Fool’s joke, the only thing that could’ve improved this joke was a tweet from Tiina on the NYB twitter feed objecting to it, saying the rule was conceived in meetings with the Freedom Truckers convoy leaders and is intended to target anti-vaxxers.