ISL Naples: What Worked Well For Each Team On Day Two 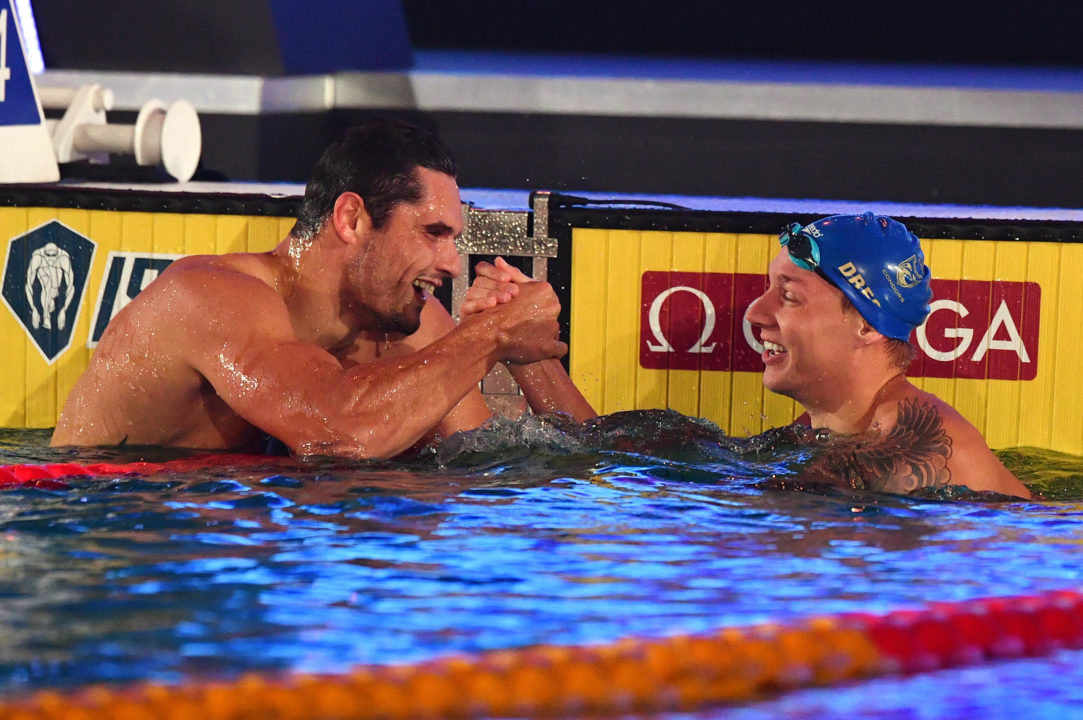 Energy Standard just clipped the Cali Condors for first. Yet in the race for third, DC Trident had clutch swims that edged the Aqua Centurions by 0.5 points. Stock photo via Federici lapresse

The Energy Standard team, led by James Gibson, have successfully swept both matches in ISL Group A: the first by a runaway in Indianapolis, and the second this weekend in Naples in a nail-biting competition.

Heading into day 2, the Condors had a huge point-gap over the Energy Standard. However, it was Sarah Sjostrom and Femke Heemskerk‘s repeat 1-2 finish in the 50 free skins that gave Energy the 48 points to put them half a point ahead of the Condors. Despite Caeleb Dressel‘s 27-point snag for the men’s skins race, Florent Manaudou‘s 21 points and Ben Proud‘s 3rd-place finish gave Energy Standard their 2.5-point lead over the Condors to win their second-straight match.

In the race for third place, the home advantage team Aqua Centurions heavily leaded the DC Trident until Siobhan Haughey snuck into the top 4 skins finishers to earn double points for her team. In the team race, DC Trident clipped the Aqua Centurions by half a point for the third-place team.

The Energy squad also remains on top of the season points rankings with a 2-point advantage over the Cali Condors.

Looking at the MVP and prize money standings, it is evident who are the top swimmers in Group A and vital assets for their teams. Caeleb Dressel and Olivia Smoliga continue to represent their respective gender’s sprint events as well as Energy Standard counter-parts Sarah Sjostrom and Florent Manaudou. In the same way, Lilly King is dominant in the women’s breaststroke for the Condors while Chad le Clos never fails to put on a show for Energy Standard in the men’s fly events.

However, there were four swimmers from DC Trident who really showed true grit and powered the team to catch the hosting Aqua Centurions for the third place team.

Likewise, Energy Standard’s catch-up was not just from the skins swims and sprint relays. Belarusian Ilya Shymanovich represented men’s breaststroke well with his first-place finish in the 100 breast, toppling Aqua Centurion studs Nicolo Martinenghi and Fabio Scozzoli. A secret underdog for Energy also was Canadian Kayla Sanchez, who picked up 14 points from her runner-up finishes in the 100 free and 200 IM.

Sanchez, along with Olympic champion Penny Oleksiak, were key swimmers in the winning mixed free relay and showed how deep Energy Standard truly is as Gibson chose to save Sjostrom/Heemskerk for the skins races.

With Group A’s double matches now complete, these four teams now have a lot of preparation heading into the November derbies The derbies will consist of a US-based derby and Europe-based derby to determined the top two teams that will advance to the Las Vegas final in December.

This coming weekend, the Group B teams (LA Current, NY Breakers, London Roar, Team Iron) will now have their taste of the ISL pool.