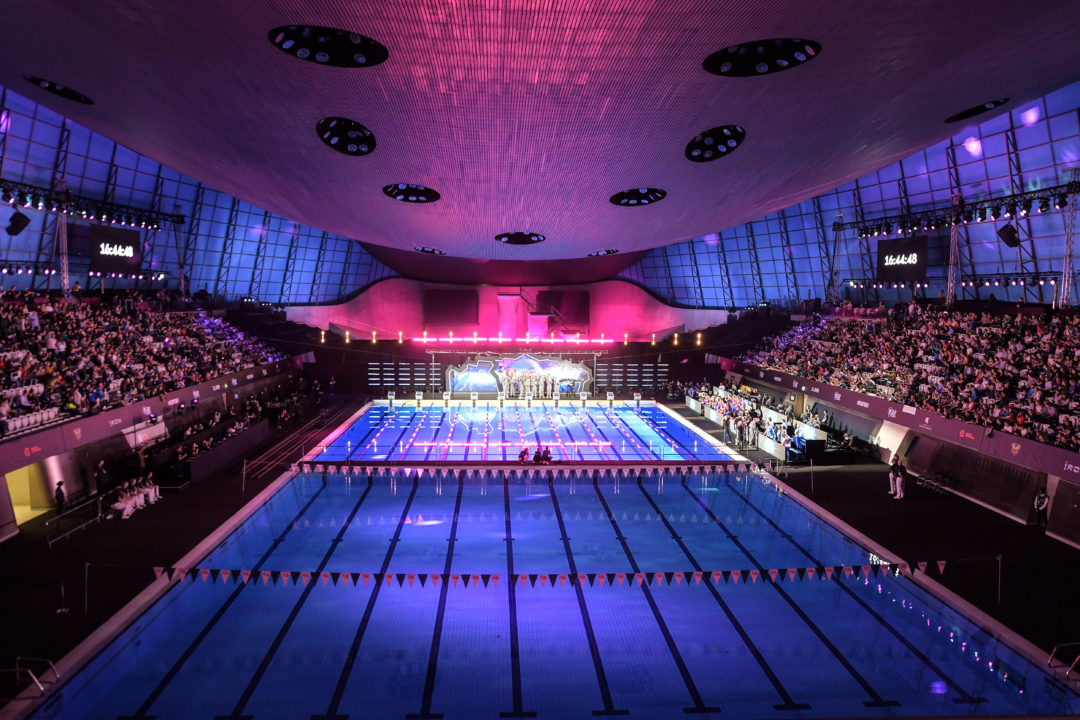 The ISL has released its official medical protocols, framing a 'bubble' model, but with athletes allowed to leave the bubble for short periods of time. Archive photo via Gian Mattia D'Alberto/LaPresse

The International Swimming League has released the official medical protocols for its 2020 season, framing a ‘bubble’ model, but with athletes allowed to leave the bubble for short periods of time.

You can read the full protocols here.

We’ve dug through the protocols and tried to unpack the key details below:

90 Minutes At A Time Outside the ‘Bubble’

The ISL uses the term ‘bubble’ to cover the areas where athletes will live, train and compete. But it’s not exactly a bubble in the strictest sense, as athletes are allowed “the occasional period of stay outside of the Bubble being maximum 90 minutes.”

That means athletes, coaches and officials can leave the bubble for an hour and a half. Re-entering the bubble will require a handful of medical protocols:

The latter two points are considered “pre-triage checks” under the ISL protocol.

That’s where the ISL model differs some from the NBA Bubble that was used for professional basketball in the United States. In the NBA version, athletes could leave the bubble, but upon returning had to quarantine either four days (for excused absences) or 10 days (for unexcused absences).

What is the ‘Bubble’?

The ISL has defined the ‘Bubble’ as a combination of a few sites:

The map below shows all the key sites, with hotels represented by the green houses and the training/competition venues by the red stars:

The protocol lists three hotels that will house ISL participants and no one else: the Thermal Margitsziget Health Spa Hotel, the Grand Hotel Margitsziget and the Danubius Hotel Helia.

The ‘Bubble’ allows athletes to move freely, not just within their hotel, but on the whole of Margaret Island. The protocols do disallow a few specific types of places within that bubble: participants cannot be in “enclosed public spaces” or “entertainment venues.”

Within the hotels themselves, hotel staff will be tested for COVID-19 under the same protocols as the athletes, coaches and officials. Athletes will each have their own rooms, while coaches or officials can be in single or double rooms.

Meals will be strictly scheduled, with all participants eating while socially distanced. Teams will have a conference room to hold team meetings when needed.

The training facilities are at both Duna Arena and the Dagaly Thermal Bath and Swimming Pool. Both are just off the island, along the river’s edge to the northeast. The two facilities are within walking distance of one another.

The protocols expressly forbid mascots, team photos, handshakes and hugs while in the training and competition venues. (“If necessary, participants may use the toilets,” the protocols read).

Athletes will have to social distance in gyms, but are exempt from wearing masks in both the gym and pool.

Each team will have its own bus to travel from the hotel to the training and competition venues. The buses are considered a part of the bubble. Participants will social distance and wear facemasks, and must use hand sanitizer upon boarding.

What Happens If Someone Tests Positive

The ISL said earlier this month that all participants will be tested every five days. But what happens if someone tests positive for the coronavirus?

For the purposes of fans following the season and wanting to know how long a swimmer could be out of commission, here’s a general rule of thumb:

This is very similar to the NBA’s testing model, which also called for a 14-day quarantine after positive tests.

The protocols also give a sense of the scale of this ISL season. Per the protocols:

What type of PCR test do they use?

It would be good to time your 90 minute excursion to be right before the every-5-days test.

How do they draw the line between an outdoor seating restaurant and an entertainment venue?

If you are allowed to roam freely on the island, how will they know if you enter one of the forbidden venues?

Sounds like the case of the couple who paid 10s 0f 1000s$ for a luxury cabin & fine dining cruising the Danube . Instead because of a drought , they got bussed to river vantage points , put up in hotels & given hotel food.