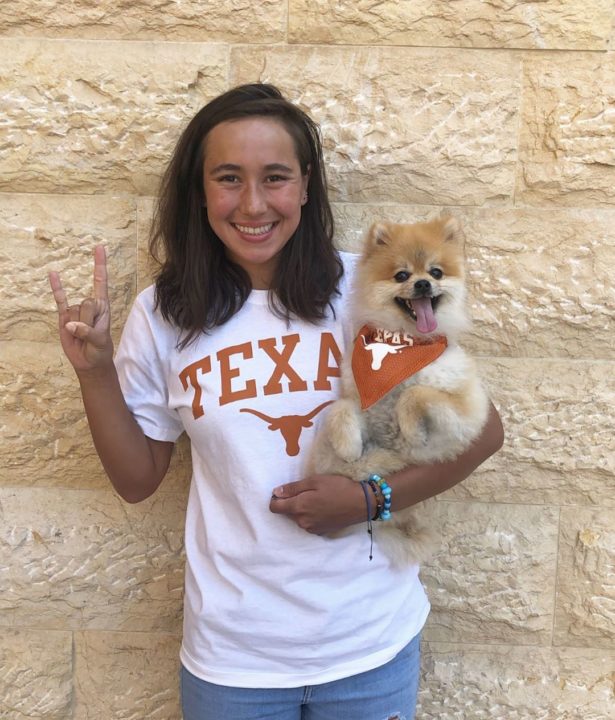 Sullivan, the second-fastest female miler in SCY history, originally committed to the USC Trojans for fall of 2018. Current photo via Erica Sullivan

United States National Team member Erica Sullivan has chosen the University of Texas for college, looking to begin in fall 2021. Sullivan trains with Sandpipers of Nevada.

The second-fastest miler in short course yards history behind only Katie Ledecky on the women’s side, Sullivan was initially committed to the USC Trojans for fall 2018 but de-committed in June 2020; she has had her fair share of road bumps the last few years.

She had been planning on going to USC for film; Texas has a highly ranked film school, too. According to The Wrap, a publication focused on the film industry, USC has the #1 ranked film program in the country and Texas has the #9 ranked program. Among other Power 5 schools with top 10 programs are UCLA (#3) and North Carolina (#10).

I wanted to take this opportunity to thank all those who showed interest in me throughout my college recruiting process the second time around. I am grateful for the time and effort spent talking to me about my future. It was nice to have coaches see what was best for me rather than what I could do for them.

With that being said, I look forward to training with an incredible group of women. Hook em’🤘🏼”

After graduating high school in spring 2018, Sullivan appeared ready to enroll at USC that fall. She wound up deferring a semester, to a January 2019 start, then in late 2018 decided to not enroll in the 2018-19 season or the 2019-20 season. That two-year deferral was due to her continued progression as an open water and pool distance standout (she finished third in the 1500 free at the 2018 U.S. Summer Nationals), and at the time, she said she wanted to still join USC but ‘after the Tokyo Olympic cycle.’

Towards the end of the 2019-20 season, however, longtime USC head coach Dave Salo stepped down from his role to focus on Olympic hopefuls and USC distance coach Catherine Kase relocated to Idaho. Shortly after that coaching shuffle, and the beginning of the pandemic’s first wave in the United States which caused the Olympics to move to 2021, Sullivan announced she was de-committing from USC and entering the college class of 2025. In that announcement, she illustrated key details into her initial deferral and her family hardships at the time.

Next fall, Sullivan will start her freshman year at Texas as one of the best distance swimmers the NCAA has ever seen. At the last NCAA Championships, in 2019, Sullivan would’ve won the 1650 free title by over 15 seconds (roughly the time it takes to sprint the final pool-length, including the preceding flip turn).

She is a HUGE get! Unfortunately she doesn’t really help on relays, except maybe 800 free.

Pretty sure the chance of a SwimSwam internship taking over for Coleman on the Podcast sealed the deal for Texas lol.

Does anyone else think it’s weird she will be a 20-21 yr old freshman living with 16-17 yr olds? Doesn’t seem to be stacking the deck fairly as a 3 yr age gap is huge from a developmental perspective!

It’s very rare for college freshmen to be 16 or 17. It’s even rarer for those 16 or 17 year olds to be varsity college athletes, especially at a place like Texas.

How do you know who she’s going to be living with?

In light of the above, I don’t really think it’s that weird at all.

Have you ever heard of D2?

Y’all need to get on board with D3: football’s finest
https://youtu.be/8g–fTrAuSw

I have to chuckle at this because if she was foreign, everyone would be asking and commenting about her age.

But since she’s American, everyone defends her. I see y’all. Keep that same energy.

Congratulations Erica- you picked a fantastic group of ladies and coaches and Austin is a crazy cool town!

I think it is/was wise of Erica to take a step back and figure out what works for her with respect to her studies and training. I’m sure the pandemic etc also affected the past 6 or more months as well.

On a broader note, some students, right after HS graduation are not set for college for a myriad of reasons. Everyone’s journey can’t be fit into a box. Taking time at a young age to figure it out can be a future blessing.

Cheering for all of our student-athletes and students during these tough times.

While she may be older than a lot of the typical 18-19 year old (with a very few scattered 17 year old) domestic first years, it seems pretty common for international students to be 19 or even 20 when they start. Probably not as big a deal anyway for females as males when you factor in maturity at different ages.

Agreed. With Covid, and Olympic prep years, we are seeing more and more delayed entries. Just look at PsychoDad’s kid.

Will she have 4 years of eligibility? she’ll the age of a senior her first year won’t she?

I think you can take only one gap year, unless some new covid rule?

She might have taken one gap year and one redshirt year, no?

Was not expecting this. Nevertheless big congrats!!!