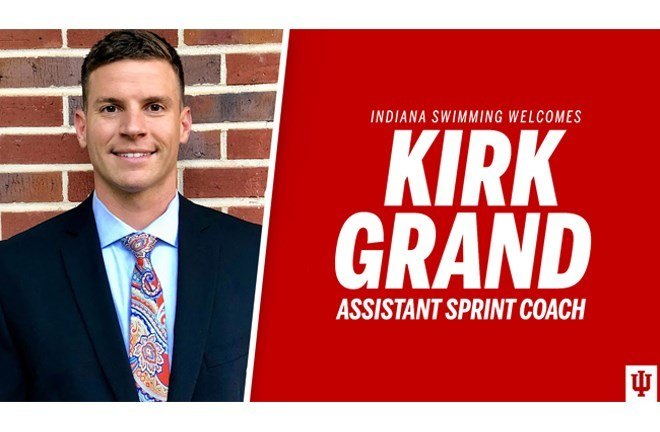 Grand's arrival will coincide with the transfer of U.S. National Teamer Zach Apple, who trained under Grand at Auburn but will join Indiana for his senior season. Current photo via Indiana Athletics

Indiana has hired Dr. Kirk Grand as its new assistant sprint coach. He fills the hole in the staff created when Mark Hill left the program after the conclusion of the 2017-2018 collegiate season. Grand’s new role also includes appointment as the associate director of the Counsilman Center for the Science of Swimming.

Grand previously coached at Auburn, where he was an assistant coach for 2 seasons and a volunteer assistant for 3 under then-head coach Brett Hawke. When Hawke resigned and Gary Taylor took over as head coach, only head diving coach Jeff Shaffer and Director of Operations Hillary Henderson were retained from the old staff.

“We are excited to add Dr. Kirk Grand to our coaching staff, ” Indiana head coach Ray Looze remarked. “At the beginning of this search process, my goal was to enhance our coaching staff on the pool deck, in recruiting and in the area of swimming innovation. With our current roster of athletes who range from varsity to Olympians and professionals, Indiana University is committed to its growth as a global hotbed for the sport of swimming. With the hiring of Dr. Grand, we honor Dr. Counsilman’s legacy and reconnect ourselves to the academic pursuit of swimming excellence which the Counsilman Center for Swimming research has contributed to since its inception. This is another positive step forward for our program toward Tokyo 2020.”

Grand is credited as the primary coach of 19 All-American swimmers from his time as Auburn, and is a member of the 2017-2018 USA Swimming National Team Coaching Staff, thanks to his listing as the secondary coach behind Hawke of World Championship team member Zach Apple. Apple transferred to Indiana for his senior season after Hawke’s resignation.

Grand earned his PhD from Auburn specializing in psychophysiology.

This will be his second stint in Bloomington: from 2011-2013 he was the head boys’ coach at Bloomington South High School, including leading them to a state runner-up finish (just 1.5 pints behind Carmel) in his first season. That earned him Indiana High School Coach of the Year and NFHS Sectional Coach of the Year honors. In conjunction with his time at Auburn, he remained a research associate for the Counsilman Center as well.

Indiana’s head sprint group coach is Coley Stickels. Indiana, which for most of the last decade was known as a program that excelled in strokes (especially 200 yard stroke events), has had a sprint breakthrough under Stickels and previously Dennis Dale, who joined the team from Minnesota for the 2014-2015 season. At the 2018 men’s NCAA Championships, Blake Pieroni was 8th in the 50 free (19.17) and 4th in the 100 free (41.51) at NCAAs, while the 200 and 400 free relays finished 9th and 6th, respectively. The year before, both Indiana sprint relays finished in the A-final at NCAAs. Prior to 2016, the last 7 years had seen only one Indiana men’s sprint freestyle relay score at the NCAA Championships: the 400 free relay’s 14th-place finish in 2015.

Congratulations to Kirk and to IU, he’s one of my favorites we’ve encountered on college coaching staffs.