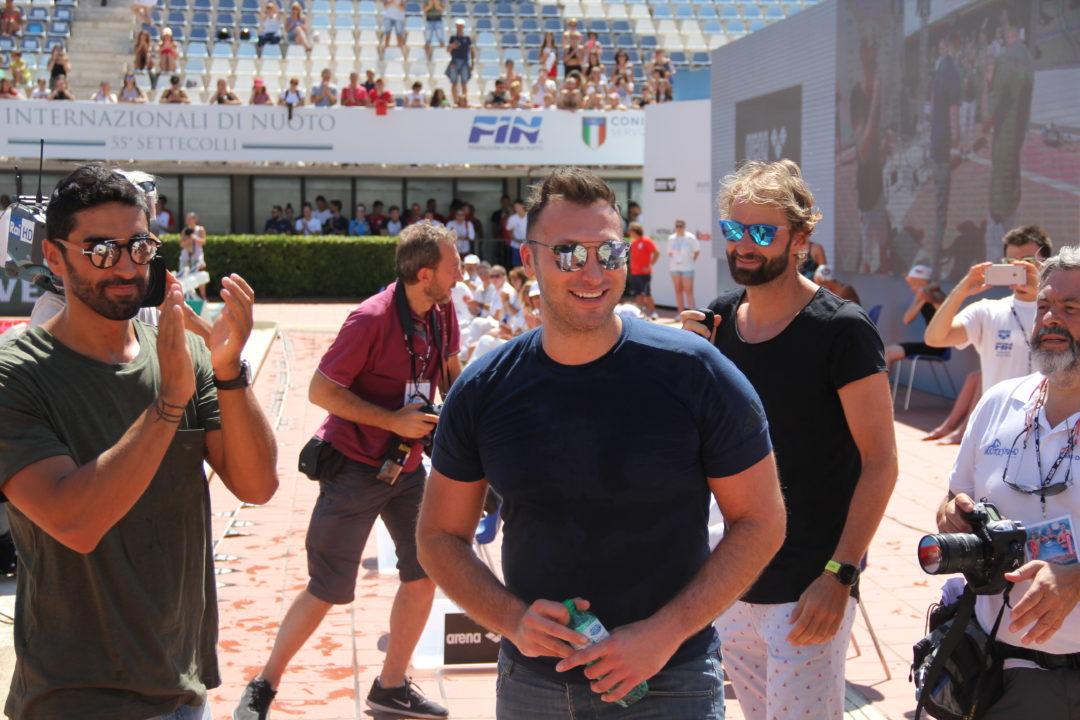 Australian icon Ian Thorpe made an appearance in Rome at the Sette Colli Trophy. Current photo via Giusy Cisale

Australian legend Ian Thorpe made an appearance at the Sette Colli Trophy in Rome during preliminary action on Saturday, meeting with athletes and fans while being accompanied by Italian swimming icons Massimiliano Rosolino and Filippo Magnini. Per our Giusy Cisale, Thorpe spoke about the importance of educating future generations on the sport. 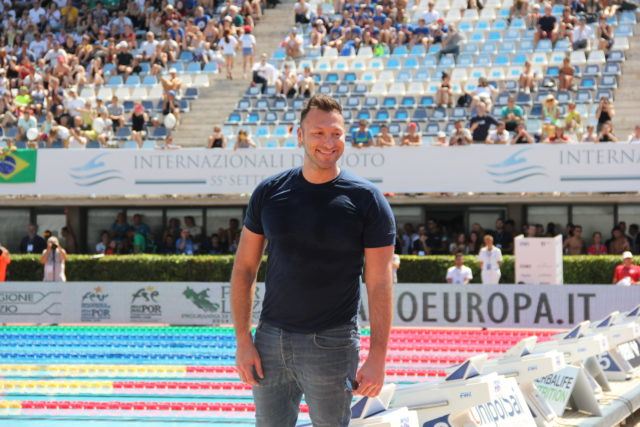 Thorpe had an illustrious career in the sport through the late ’90s and early 2000s, winning five Olympic gold medals and nine total to be the most decorated Australian Olympian in history. At the 2000 Games in his home country, the now 35-year-old was the most successful athlete in any sport with three gold and two silver medals, including an epic come-from-behind win in the 400 free relay, where he ran down American sprinting legend Gary Hall Jr. to send the Sydney crowd into a frenzy.

After a 2nd successful Olympiad in Athens in ’04, Thorpe took a year off, planning to return at the 2006 Commonwealth Games, but ultimately had to withdraw due to illness and ended up announcing his retirement that November. In 2011 he announced a return to the sport, aiming to qualify for the 2012 Olympic Games in London, but ultimately came up short.

Ledecky. When he can win by a mile in a mile, he can be the freestyle GOAT.

Except he doesn’t have a single freestyle world record.

His Australian record for the 400 free is only 0.01 seconds slower than the current world record, and has come close to it far more often than biedermann or anyone else has.

Again, I present Ledecky where the 0.01 sec difference between her and the second best ever is practically per yard.

Does being the GOAT mean your records have to stand forever? The sport would never progress.

This summer all of Phelps’ remaining records could fall (in probability order: Dressel, Milak, Kalisz). He won’t suddenly stop being the GOAT.

In any event, Thorpe’s PBs would have won the 200 and 400 double at every global championships since the London Olympics (where Agnel beat his 200).

Exactly. Being the GOAT means that you accomplished things in your career that few (or none) can conceivably match. Times are largely a function of advances in science, technology etc, and so are not the right measuring stick for GOAT, especially in the long-term. Mark Spitz is one the greatest of all-time, not because of how his times look today (nowhere near competitive, given that they are from 40 years ago), but because of what he accomplished in his career. Phelps could have narrowed his focus to like 2 events and probably put up even far more impressive times (with a focus on for example: only 200fly and 200IM) due to more specialization in training and greater energy preservation at… Read more »

Other than Agnel’s 200free masterpiece in London 2012 , and Phelps’ in Melbourne 2007, nobody has ever swam faster than his 1:44.0 and 3:40.0 in still-legal suits. I think it says a lot about his success that only 1 swim in the last 10 years (excluding super-suit) has been faster than his old WRs, which are now more than 15 years old.

Actually Phelps 2007 swim isn’t in a legal suit either. His performances in 2001 are tied with Phelps in 08 IMO. All of them were freestyle, and he completely dominated other ATGs in Hackett and VDH in the 800 and 200. He didn’t just win, he did it in a mesmerizing way. He literally watched Hackett, switching his breathing side every length, for 750m, before swimming off in the last 50. Had he swum the 200IM or 1500 in 2001, he would have medalled and potentially won gold in both. Maybe to the detriment of the relays which Aus could never have won without him posting PBs. He had 1:58 in the 200IM in 2003 when he had left his… Read more »

Not even best Aussie freestyler of all time. That would be Shane Gould. Only person, male or female, to hold every world freestyle record from 100 to 1500 meters.

That iis ridiculous . Thorpe is still the fastest ever in the 400 free. I don’t count that plastic Bidermann wr.

Here’s where the body shamers and homophobes chime in….

This comment should not be here. We in the swimming community are very proud of Ian, in all respects.

time to take it down buddy , and straight on .