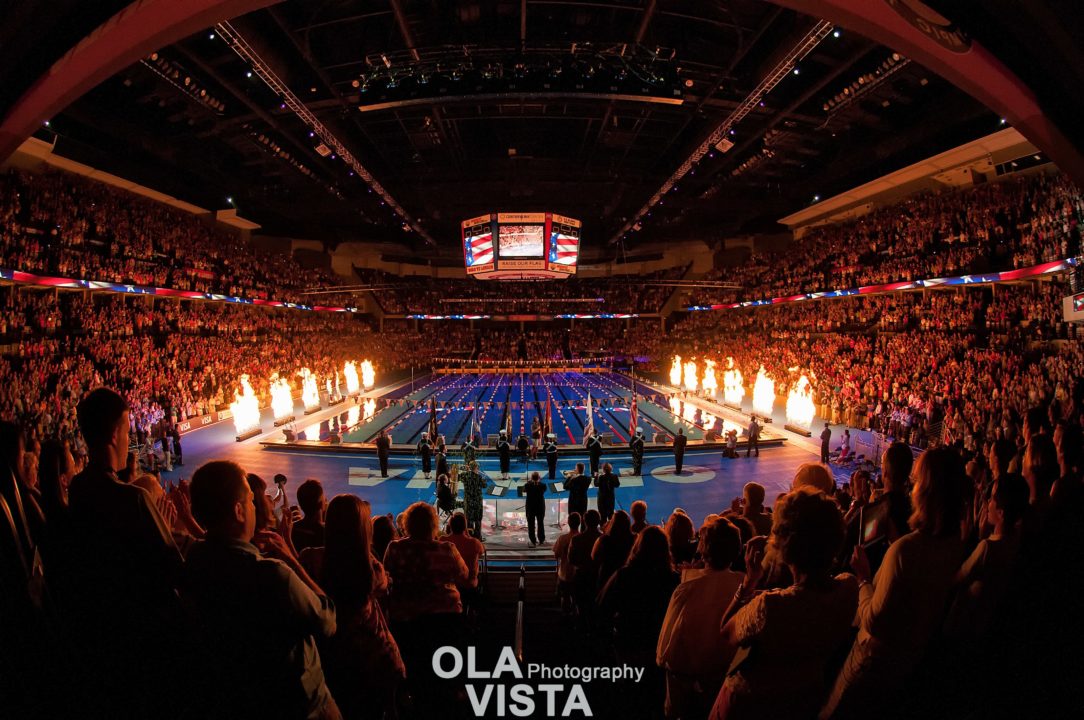 In a word: Amazing.  The Omaha organizing committee and the USA Swimming staff built upon the success of the 2008...

In a word: Amazing.  The Omaha organizing committee and the USA Swimming staff built upon the success of the 2008 trials and presented the athletes, coaches and fans an ‘off the charts’ experience at the 2012 USA Swimming Olympic trials.   I was fortunate to be there to capture some of the sights that still resonate and inspire as we look forward to the beginning of the Olympic competition in London on July 28th.

“Boom! Let’s go” – I’d been planning to make this image since the 2008 trials.   From this point on there was now doubt this was going to be mind blowing event.   Although, I’m sure it came as a surprise to the men in the 400IM final when the pyrotechnic  boxes mistakenly fired during the breaststroke leg.

“First one on” – Ryan Lochte came out with a bang in the 400IM and with his win became the first person on the ‘pool’ team (Haley Anderson made the open water team a couple of weeks prior and Alex Myer made the open water team last summer by virtue of this performance at the World Championships in Shanghai).   Lochte threw down a blazing breaststroke leg to seal this one.  As expected, this was a crowd favorite moment as he rose to the medal ceremony on the hydraulic podium.

“Go John” John Criste, one of the truly ‘good guys’ in our sport surprised some  by throwing down the fastest time in the prelims (1:00.29).  In a race, and selection event, where anything can happen, the semi’s weren’t as strong for the Stanford grad, but his fortitude and determination left a strong mark on his fellow competitors and the fans.  John will be attending the University of Miami law school in the fall – but hopefully we’ll still see him around the pool.

“Happy to be here” – 15 year old Katie Ledecky beams what is good about our sport before the start of the 400 free prelims.   Although she didn’t get an Olympic birth in this event, she did eclipse Janet Evans’ age group record.   Later in the meet she was crowned champion in the 800 free with a time that puts her right in the hunt for a medal in London.

“I know you’re there” – Katie Ledecky’s star is rising but Allison Schmitt had an extra gear in this race.   Schmitt went on to win the 400 and 200 freestyle races and was 3rd in the 100 and that likely gets a good seat on the relay.

“Thanks – we noticed” – while some in the media were quick to point out Olympic swimming legend Janet Evan’s ‘failure’ to make the Olympic team, I saw a great swimmer showing us the human side of  determination in enjoying the ‘process’.   It was a trill and an honor to watch this prelim swim.

“With you at the start” – It’s anyone’s race at this point; all you need is a lane.   In the 200 free, the odds are even better – the top six were named to the Olympic team as members of the 800 free relay.  When the race champion, Michael Phelps, later decided to drop the 200 free from his Olympic schedule Davis Tarwater’s Olympic hopes came true.

“Queens of breaststroke”  100 Breaststroke World Record holder Jessica Hardy matches up with teammate Rebecca Soni and legend Amanda Beard in the semi’s of this event.  To many’s surprise, Hardy didn’t make the team in this event, but she went on to dominate in the 50 and 100 freestyle events.

“I bet you didn’t expect that” – Breeja Larson surprised many (perhaps even herself) by winning the 100 breaststroke.   Not only was her swim amazing, her attitude and infectious glow quickly made her a favorite amongst swim fans.   When some say swimming has become too “flashy” Breeja reminds us about the essence of swimming.

“Summer can wait” – Breeja Larson spent so much time signing autographs that NBC commentator, and swimming legend, Summer Sanders almost didn’t get in the post race interview.   Lucky fans in the first rows got some cherished autographs, but everyone in the arena that night got to feel Breeja’s joy.

“On solid ground” – With guys like this on your team it’s going to be a very good meet.   Team USA is again looking strong heading into the London Olympics

“Epic” – It seemed like everyone was talking about the Phelps/Lochte ‘showdown’ in Omaha.   In the final of the men’s 200 free it seemed like Ryan Lochte was going to get past Michael Phelps again – at least that’s what I thought when I saw L0chte come of the 3rd turn with an amazingly powerful underwater.   But there’s a reason Phelps is called the greatest; he out touched Lochte at the end by five one-hundredths of a second.

“Warming up for London” – some say Michael was not really rested for Omaha, and after the 200 free he looked like his focus was on future races.   Perhaps that’s true; when you’re one of the greatest athletes of all time you can pick you battles.   Nevertheless, this man has a plan and we’re likely in for a some excellent swims from him in a few weeks.

“Being first is cool” –  Cal’s Dana Vollmer won the 100 Fly  with a crushing 1 second plus win.   Her time of 56.50 was just off the American Record she set in prelims.   Grabbing the Gold and WR are certainly within her reach for the London games.

“For Real” – Yes, Missy Franklin is for real.  Missy’s a great swimmer.   But as this shot shows, she’s not jaded – winning the 100 backstroke was ‘fun’.   After receiving her award she told the crowd how she ‘felt like the luckiest girl in world”.   You know, I totally believe her.   She’s going to be fun to watch in London and for many years to come.

“I’m back” – Anthony Ervin is a great swimmer and his comeback is making the rounds in the media.   Where did he go?  Not sure, but it is great to see a guy who appears to be loving the sport and journey like none other, do so well.

“Michael races Michael” – Michael Phelps and Michael Flach meet up in the semi finals of the 200 fly.   Phelps would go in to win his ‘signature’ event.

“Just a big kid” – and an amazing backstroker.   Matt Grevers, despite his towering size and blazing speed, showed the crowd that winning in Omaha was just as fun as winning your first ribbon at a summer league meet.

“A real legend” – Olympic swimming great Adolf Kiefer presented the award for the men’s 100 backstroke.  This was apropos, Kiefer won the gold medal in the 100 back at the 1936 Olymipcs.

“Clary too” – Tyler Clary, a great swimmer by any measure, seemed to be cursed by the shadow cast by Phelps and Lochte.  Yet, in the 200 fly he showed he’s the real deal and earned a spot at the crown jewel of swim meets.  Tyler went on to earn an Olympic spot in the 200 backstroke.

“Waiting for Michael” – this is what it looked like when Michael Phelps got up to swim the 200 fly.

“Moving forward” – Davis Tarwater put the disappointment of his 2008 3rd place finish behind him and trained hard to earn a spot on the 2012 Olympic team in the 800 free relay.  By the way, 3rd is only disappointing because the top two make the Olympic team – getting 3rd at the world’s fastest swim meet is VERY impressive.

“Fire Water” – well not really on the water, but you should could feel these pyrotechnic flames when they went off during the evening sessions.

“Still in there” – Jason Lezak’s still got it.  He’ll be going to his 4th Olympics as a member of the 400 Freestyle relay team.

“Boom 2 – Higher Ground” – One of the many nice things about the CenturyLink Arena in Omaha was the arguable notion that there’s not a bad seat in the house.  This was the perspective from the highest seats.

It was a great meet and Omaha once again showed they have what it takes.   We’re not sure where the next trials will be, but one thing is for sure: the 2012 USA Swimming Olympic trials will be tough act to follow.   Certainly the USA has another very strong team headed to swim at the Olympics.

Contact me if you want information about Ola Vista Photography products and services.

Awesome Mike! There should be a “How I saw it” after every national/international meet. Love it!

Thanks Amy – I hope to do more of these in coming months and years.

Thanks Mike – AquaJets for life!

Great photos and from what you wrote about Breeja Larson it sounds like she really won you over as well.

Yeah , arrogant Us TV is what it is ! protect the copyrights …..and ??? no fun . never mind …i did record most races on my cellphone … hehhehe
Record your London races from BBC live coverage .

Beautiful photos. Congrats to you. Incredible week. Fantastic swimmers. The last time Michael Phelps swam in USA.
I’m really angry that I can’t watch again some of this races like the women’s 800 free which was amazing only because of the tyranny of NBC. They almost block all videos on youtube. On nbcolympics.com all the videos are banned for international viewers. It isn’t nice.

Excuse me. I can’t watch again some of these races.

Im not advertising this website, but there is a way to watch the races again Bobo Gigi, just go to youswim.com.br
They have most of the races from trials, hope you will find there all the videos you want to see again.