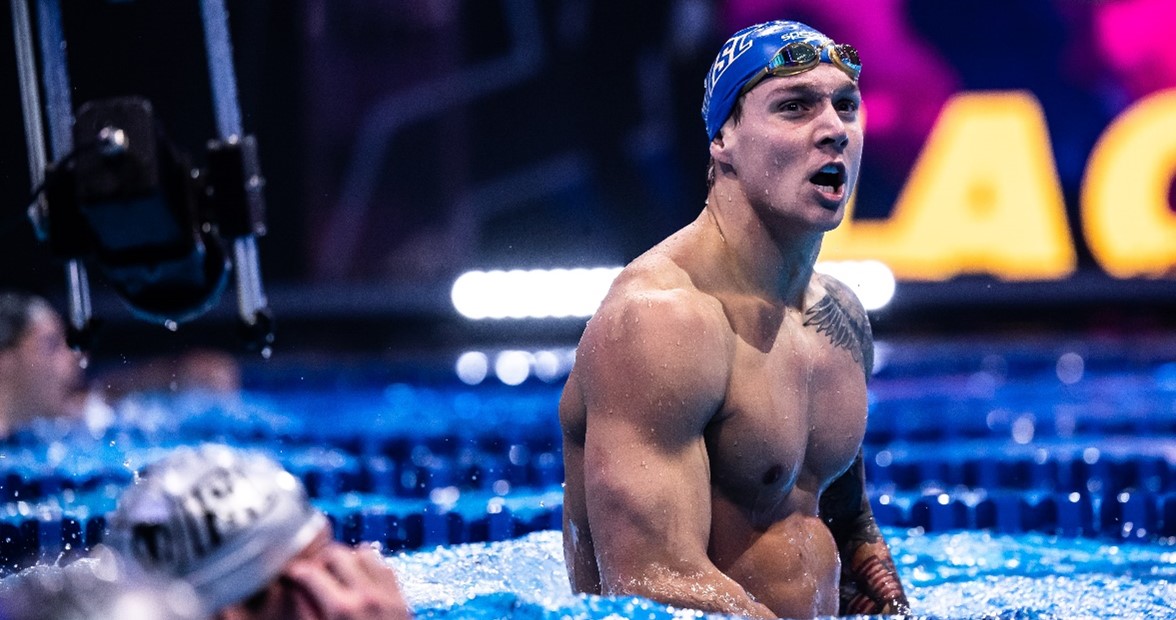 On December 9th, Caeleb Dressel will attempt to go where no man has gone before in an outlawed 2008 Speedo LZR Racer suit. Archive photo via Mike Lewis/ISL

Beisel will share her expertise and walk through her tips and tricks of all the various IM training methods that helped make her one of the best in the world.

If you don’t like the career you’re in, you might want to work in the swimming community and be a part of our swimming family! Go here to see 2930 Swim Jobs.

American swimmer Caeleb Dressel will rewind the clock and suit up in the infamous full-body Speedo 2008 Fastskin LZR Racer “super suit” next month as part of an exhibition designed to see how fast a man can go in water without any swimwear restrictions. The event is meant to mark the 20-year anniversary of the release of Speedo’s iconic Fastskin suit series.

Specifically, the goal is to break the 20-second barrier in the 50 short course meter freestyle. After teasing the event with a social media post last week, Dressel almost blew the game early by swimming a legal 20.16 in the ISL finals last week. That was one of three World Records that he broke across the two-day grand final, also clearing marks in the 100 fly and 100 IM.

The Fastskin LZR Racer suit, now outlawed in official competition by FINA guidelines, was worn by 94% of Olympic gold medalists at the 2008 Olympic Games in Beijing. The suit incorporates polyurethane, a rubbery substance, with woven elastane-nylon into the suit’s material, giving swimmers extra buoyancy and reducing fatigue. Beginning in 2010, FINA only allowed suits made out of textiles.

Over 200 World Records were broken in 2008 and 2009 combined in the Fastskin LZR Racer and other similar suits.

The attempt will be filmed on December 9th and released on the 10th. The original goal was to do it live, but the timing didn’t quite work out.

A spokesperson for Speedo says that Dressel will be racing alone and that other attempts might be made, but so far the 50 free is the one set in stone (pending any changes to coronavirus restrictions).

Caeleb Dressel – the fastest swimmer in the world – will wear the infamous Speedo 2008 Fastskin LZR Racer “super suit” next month as part of an exhibition event designed to see how fast a man can go in water with no restrictions.

The two-time Olympic gold medallist currently holds the world record for the short course 50m freestyle when posting a time of 20.16 last weekend at the ISL finals in Budapest and will wear the suit for his sponsors Speedo to help celebrate the 20th anniversary of their Fastskin suit series. (Subject to ever-changing COVID-19 restrictions).

Since Dressel posted a teaser image on social media, fans have speculated whether he could become the first man to ever break the 20-second barrier.

Suits that were not completely made from textiles were outlawed in 2010 after 94% of swimming gold medals in the Beijing Olympic Games were won by athletes wearing the Speedo Fastskin LZR Racer, which hugged the body up to 70 times tighter than other suits.

Swimming in approved suits, Dressel has already beaten both the winning time of the 2008 Olympics and the final short course world record to be achieved in the Fastskin LZR Racer body suit. Now, in a bid to experiment and continue to be at the forefront of innovation in the sport, Dressel and Speedo will team up to explore what would be possible were the athletes of today permitted to wear the suit.

Since their launch in 2019, Speedo’s latest Fastskin suits – Pure Valor and Pure Intent – have been worn for 63% of all world records broken, with Dressel himself smashing the world record for the 100m individual medley at the International Swimming League earlier this month when he became the first person to break the 50-second barrier in that event.

Speaking about the event, Dressel said: “I’m looking forward to racing in this historic suit and really excited that Speedo has put this event together. I’m not sure what to expect time wise but I am confident I can put together a well-executed race and we’ll see what happens. I was too young to experience the hype of the LZR Racer, but I feel I am part of it now. Speedo has always been the front runner in swimming and I am always proud to be partnered with a brand that continually pushes the boundaries of innovation.”

Gregg Troy, Olympic gold medal-winning coach to Dressel, said: “The Speedo LZR Racer suit was not only an aid to competition but allowed athletes to expand what they thought was possible in the pool. It helped athletes know more about body position, controlling speed and the importance of a strong core. It broke through the glass ceilings over the sport.

“Whenever possible now, we have used opportunities to use these suits in practice sessions so that we can continue to teach the swimmers these same skills. We’re all really excited to see how fast Caeleb can go in this suit and it is another opportunity for him to leave a mark on the sport.”

Rob Hicking, Brand Director at Speedo, added: “The impact of the Speedo LZR Racer suit remains a seminal moment in the world of swimming – known as the ‘Super Suit’ era. We have always been committed to finding an edge for our swimmers and have tried everything from sharkskin modelling to testing alongside NASA in the past 20 years under our Fastskin banner.

“We’ve all seen swimmers get stronger and faster in the water and have only speculated about what could be achieved if technological advances were not restricted. We’re really excited to find out what’s possible. It’s been a tough year for swimmers around the world and so we hope this can provide some inspiration as people start getting back into the pool.”

Speedo will release footage of Dressel’s attempts in a specially-commissioned video which will be published across its social media channels at 9am PST/5pm GMT on December 10th.

Launched in February 2008, the LZR Racer suit was a high-tec swimsuit made from 50% polyurethane which caused controversy in 2008 as a series of world records were set by swimmers wearing it.

For three years, Speedo worked with everybody from universities and sporting institutes to NASA scientists to create the LZR Racer, whilst experimenting with over 60 materials.

The result was the LZR Racer which reduced drag, maximised muscle support and helped keep swimmers free in their range of motion.

The suit reduced drag (water resistance) by 38% compared with the ordinary LYCRA suits which were available on the market, resulting in an increase in speedo of approximately 4%.

Hugging the body up to 70 times tighter than other suits the suit was a huge success, with 94% of all swimming golds won at the 2008 Beijing Olympic Games won by athletes wearing the suit.

“I feel like a rocket”, said swimming superstar Michael Phelps, who helped the test the suits and subsequently won an unprecedented eight golds at the Games.

So effective was the LZR Racer that Speedo offered free suits to any athlete at the 2008 Games that wanted one. They ended up giving away more than 3,000 – included swimmers sponsored by rival brands who all made the decision to wear them.

Suits that were not completely made from textiles were subsequently outlawed in 2010.

The world’s leading swimwear brand, Speedo® is passionate about life in and around the water, creating revolutionary new technologies, designs and innovations, and supports swimming from grass-roots through to the elite level. In the 1920s Speedo® made history with the Racerback: the world’s first non-wool suit. In 2008 Speedo® redefined swimwear again with Fastskin® LZR RACER® – the fastest and most technologically advanced swimsuit ever created. 2011 saw Speedo unveil another world first with the Fastskin Racing System – a cap, goggle and suit designed to work together as one. Speedo® is owned by Speedo Holdings B.V and distributed in over 170 countries around the world. To find out more visit: www.speedo.com

Probably had a clause in his contract to sandbag it at ISL. And Speedo sewed in a drag suit just to be sure.

Idk fast I’m guessing… we want Ryan and Phelps back! Give us the real show

Phelps could probably compete. Lochte is an old man at this point

Omg How fast can schooling go!?