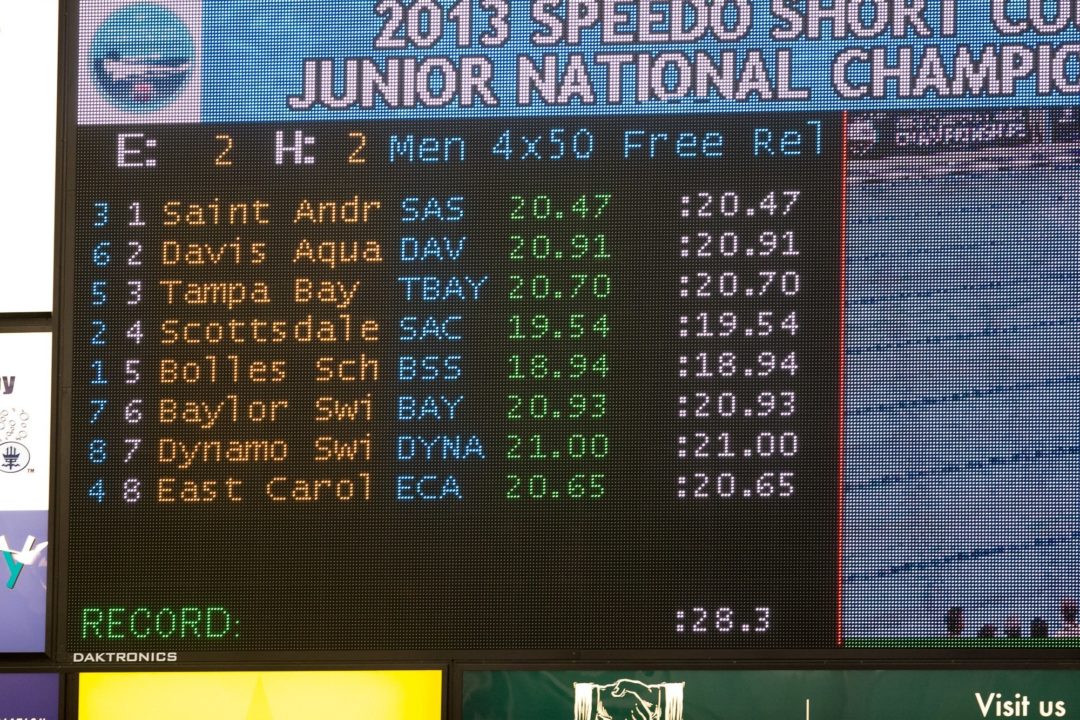 Remember when we were all blown away by a 19.36 from a 17-year old? Caeleb Dressel has now bettered that time on four separate occasions. Current photo via Tim Binning/TheSwimPictures.com

If you don’t like the career you’re in, you might want to work in the swimming community and be a part of our swimming family! Go here to see 2893 Swim Jobs.

When Caeleb Dressel went a supposed 19.0 in practice a few months ago, even for those who didn’t necessarily believe the watch 100%, there was some salivation going on.

Now, it’s time to drool. The 17-year old Caeleb Dressel has destroyed the 17-18 National Age Group Record in the 50 yard freestyle, swimming an 18.94 at just 17 years old. He’s now the first 18 & under swimmer (American or not) to go under 19 seconds in this race. This swim broke the 19.29 that he’s done twice: once at the Florida High School 2A State Championship meet in November, and once in prelims in the individual 50 yard free.

It’s not entirely uncommon to see 17-year old girls enter the ranks of ‘all-time greats’. Missy, Ledecky, Hoff…there’s been a few in that rare air in the past few years. But for a 17-year old male, especially a sprinter, to have a spot in any sort of ageless ranking is unbelievable.

That time by Dressel would have placed 2nd at last year’s NCAA Championship meet.

Now, Dressel now ranks 15th on the all-time, any-age list in the 50 yard freestyle. He becomes just the 19th person to break 19 seconds in that race – a ‘golden celebration’ of sorts. With another tenth-of-a-second drop (he’ll have one more shot at this race int he 50 free final later in the session), he’d move up to a tie for 8th with Jimmy Feigen.

Just 17? Ian Thorpe was multiple Olympic champion at 17, so let’s put this into some perspective. Phelps was World champion and WR holder.

Dressel competes in races that are primarily dominated by
older swimmers. For example, there was only one junior swimmer in
the 100 free semi finals at the 2012 olympic trials. To crack 19 as
a still developing high school swimmer is something unheard of,
even with legends like Phelps and Thorpe out there.

Yeah John, you are right. Liliana, instead of beating down what this kid just accomplished, be happy for him and stop comparing him to someone that swam in a different decade than he did.

I agree – why hasn’t he broken any World Records or won any
Olympic golds yet?? Caeleb Dressel: NOT ELITE.

You are right elite-o-meter! Since when has being the fastest Junior sprinter ever been grounds to call someone elite?! Such and over reaction to call a 17 yo male who just became the 15th fastest 50 freestyler in history elite. High School boys always do stiff like this.

I agree, plus it’s only yards. I mean most elite swimming countries outside America don’t really care about yards at all

But the definition of “world” is too small on this..

He already have done remarkable things on LCM.. but he is not the best junior freestyler yet after what McEvoy did already..

Something Phelps and Thorpe didn’t do: swim the fastest junior 50 free in the world. And the best by nearly a half-second in the US, a half-second!!!!!