Hanna House Released From Notre Dame; Eligible To Compete For Her Freshman Season At Duke In Fall 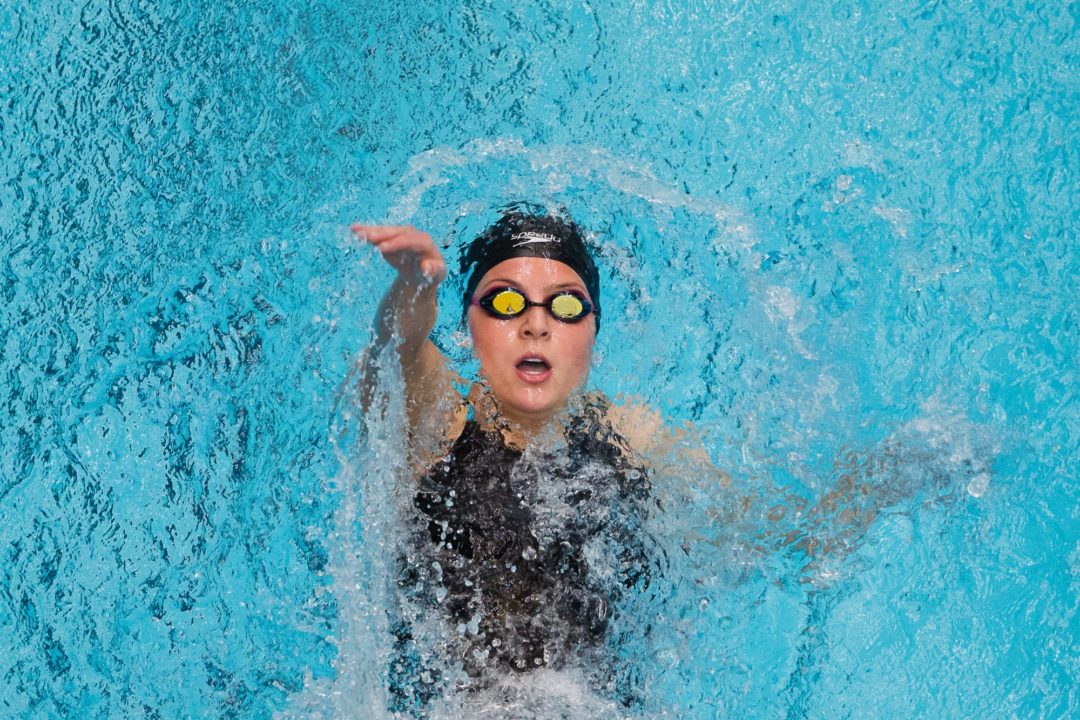 The third times a charm for Carmel Swim Club’s Hanna House. She has a had a wild recruiting journey, but... Archive photo via Tim Binning/TheSwimPictures.com

The third times a charm for Carmel Swim Club’s Hanna House. She has a had a wild recruiting journey, but now believes she has found a good fit for herself at Duke. The soon-to-be college freshman will start in the fall and should be a contributor right away for the Blue Devils.

Originally, House verbally committed to swim for the Virginia Cavaliers. She later decided against Virginia and signed with Notre Dame. Now she feels confident that her third choice, Duke, is the right place for her and that she is in an environment where she can succeed.

She did sign a National Letter of Intent to swim for Notre Dame but was released a little more than a month ago because she knew Notre Dame was not the right fit for her.

“I re-explored my options and fell in love with Duke, the campus, the team, and the direction the program is headed. I have received a waiver from the ACC intra conference rule to be eligible to compete my freshman year at Duke and I cannot wait to be a Duke blue devil!” – Hanna House

House’s impact on the ACC as a freshman will still be significant, it will now just be for a different team. House is the defending Indiana High School runner-up in both the 100 fly and the 100 back for state powerhouse Carmel High School.

This makes the class of 2014 arguably the best recruiting class in Duke women’s history, and certainly in recent history (after another class that could make a similar claim last fall). Others signed include Leah Goldman, Catie Miller, and Maria Sheridan. Read more about the rest of Duke’s class here.

In December of 2013, Duke announced that they were increasing the number of women’s scholarships from two to the “fully funded” fourteen scholarships.

“Duke University is fully committed to providing the most complete educational and athletic opportunities for women,” said Duke’s Athletics Director Kevin White. “Adding both softball and new scholarships will enhance and enrich the collective experiences for female student-athletes. Specifically, softball will be a great addition to our varsity programs because it is played at the highest level in the Atlantic Coast Conference.”

While House said that announcement is exciting to her and that it will “change the future of Duke swimming,” she didn’t even learn about Duke’s increased scholarship count until after deciding to commit there.

The Duke women have done fairly well despite being at a less-than-full scholarship lode. They have struggled with depth at the ACC level a bit (they were just 7th as a team last year), but have consistently sent swimmers and divers to NCAA’s. That includes one diver, Abby Johnston, who dove at the 2012 Summer Olympics. To do so with just two scholarships is fairly incredible.

The move could be tantalizing for establishing an east-coast equivalent of the powerful Stanford program: a school that attracts high-level recruits for academics, while still offering the ability to put premier-level focus on athletics (though, the obvious trade-off is that Palo Alto is generally speaking a nicer area than Durham).

Though there was no indication on whether there’s a direct connection, Duke football had its best season in over 50 years, and qualified for the ACC Championship game. That is likely to result in significant new revenues for the athletics department.

That’s really uncool of her. It’s called a commitment for a reason

I completely disagree. This is her college decision. She is not going to college to appease the will of a coach.

Yes, it was also her college decision to sign with Notre Dame. And if she is on scholarship (which she is), she is going to be there “appeasing the will of a coach” who’s paying for her schooling.

MarkB – that’s a two-way street. The coach chooses to use their resources on the schooling of the college athlete (we don’t know for a fact that Ms. House is receiving a scholarship), but the success of the athletes athletically and academically is paying for the coach’s mortgage.

The college coach-athlete relationship is increasingly becoming a two-way straight with a greater balance of power.

Yes, I agree but looking at her times, the amount of scholarships Duke now has and their swimmers they now have, I feel confident that she’s on scholarship.

We don’t know all that went into her decision making process so don’t be so quick to judge. Most of us didn’t have all the right answers at 18 and would have done a lot of things different if we could.

I get that she can change her mind but it’s not that hard to just wait to commit until you are absolutely certain. no one said anyone has to commit in the fall

I would take self interest over a school’s interest any day.

Good for her, but had to chuckle when reading the “fell in love with Duke” quote. Just harder to take seriously someone who has already changed their minds twice in a very short period of time.