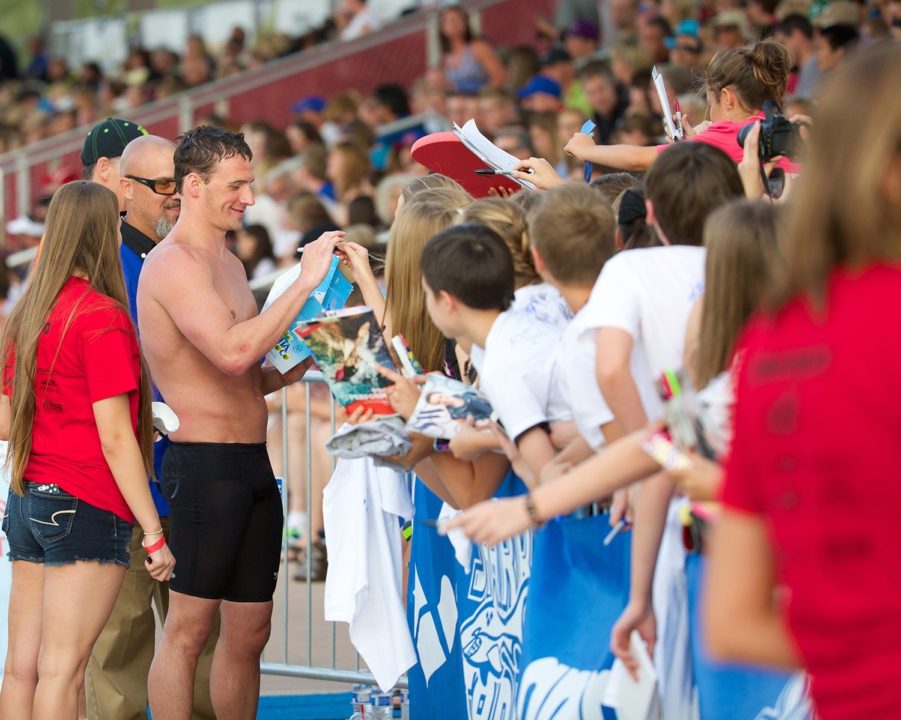 Ryan Lochte will be at the 2014 Bulldog Grand Slam in Athens, Georgia, and plans to do more than just sign autographs.

American swimming superstar Ryan Lochte has been confirmed as a participant for the Bulldog Grand Slam meet from July 10th-July 13th at the University of Georgia’s Gabrielsen Natatorium. Both David Marsh, Lochte’s coach, and the meet organizers confirmed the decision. Marsh says that they haven’t decided yet just how much Lochte will race.

The meet, hosted by the Athens Bulldogs Swim Club, will feature a select, elite group of teams, and will once again have Ryan Lochte and Michael Phelps, the two biggest names in men’s swimming, together at a meet.

Lochte was entered along with a large contingent from his SwimMAC team who plan to make the drive down from Charlotte for the meet, but originally meet organizers were not expecting him to participate.

Yesterday, however, the hosts received confirmation that Lochte was planning to swim, barring any unexpected setbacks between now and then.

Since an injury late last year that involved tearing ligaments in his knee following a run-in with a fan, Lochte has been up-and-down in his comeback swims. After the Orlando Grand Prix, he said he thought he came back too early; then in Mesa, he swam very well through two days, but pulled out of the last finals session with tightness in his hamstring.

Since then, he’s been absent from competition and at several media sessions has referred to having “reinjured” his knee.

With the U.S. National Championships, a qualifier for both 2014 Pan Pacs and 2015 Worlds, only now a month away, though, Lochte is in “now or never” territory. If he’s unable to race in Athens and recover in time for Nationals, then he’s effectively done with the big international competitions until at least the 2015 Pan Am Games, if not the Olympics (USA Swimming hasn’t officially posted selection procedures for those meets, but Worlds is expected to be chosen at this summer’s nationals as well).

If Lochte were locked out of Pan Pacs and Worlds, seeing what meet schedule he’d go after in the interim, once healthy, would be very interesting. Perhaps a trip to the World Cup could be in order, but that’s purely speculative at this point.

this should be interesting

I think Lochte should limit the events he swims at nationals. Do the 100, 200 free and the 200 back only. the 200 IM requires breaststroke. Maybe do the 100 fly but he will have to compete with Shields, who is younger, has better underwaters, and doesn’t have a bad knee.

whatever you do Lochte, take care of yourself!

The simple objective nature of swimming, though some would consider harsh, means that no matter who you are and what you’ve done in the past, you must prove yourself almost every year at the right time with no consideration for sickness, injury, etc. Otherwise, you go home.

In other more subjective selection sports you can buy some time, like aging Spain, who was caught in the World Cup a few weeks ago holding on to past performances and they were brutally exposed.

while in that same world cup , Belgium with a brand fresh young team is playing better and better ; but with smartness and pure commitment . That was an amazing game against Usa . I am of course happy Belgium came through but Usa showed amazing talent and warrior spirit .
For Lochte with that long lasting knee injury , i would suggest to just compete where he feels fit and nothing else . No forcing anything . I don’t feel he has anything to prove except on 100 butterfly ( still , he gave one hell of a leg last year in Barcelona in the medley relay ) .
Go Ryan , u can do it smartly

I hope for the best for Lochte. I bet he swims only a few races. I wonder if we will see a Lochte Phelps 200 IM.