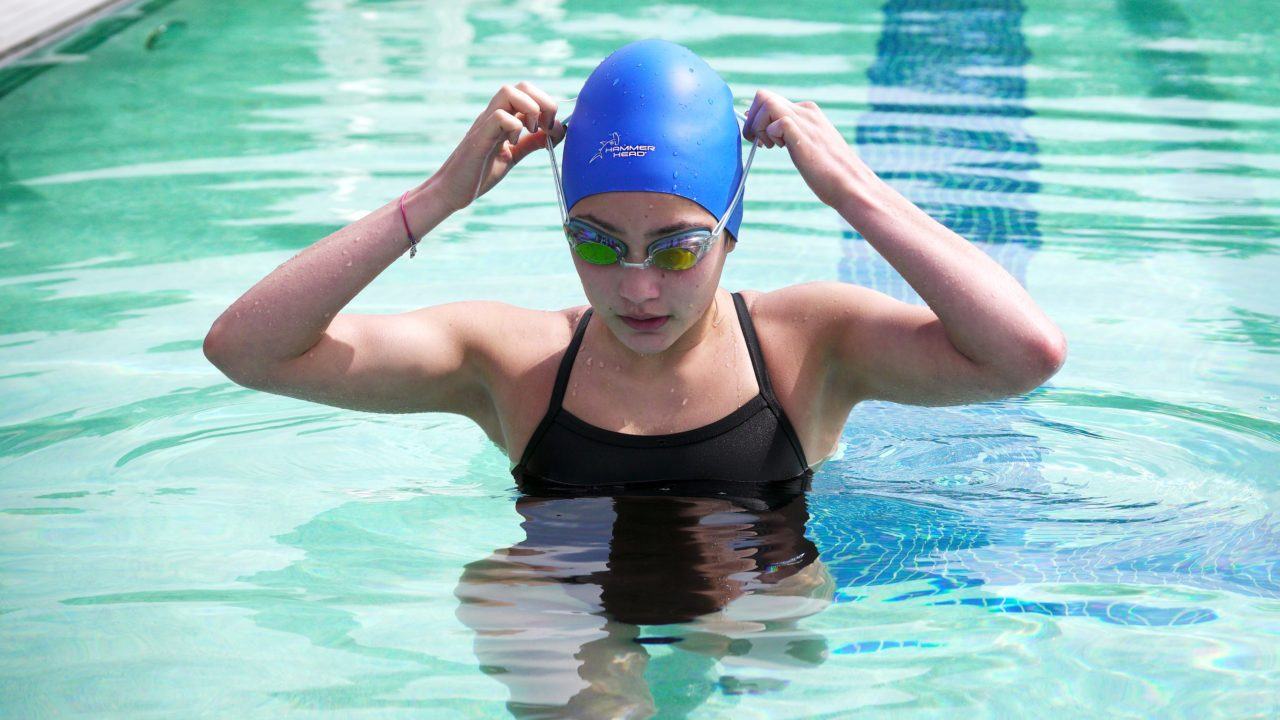 SwimSwam sat down this month with Theresa Finn and David Burns, co-founders of Mako International, to learn more about the Hammer Head® Swim Cap, a major, new cap design for improved performance and athlete safety. Current photo via Hammer Head

SwimSwam sat down this month with Theresa Finn and David Burns, co-founders of Mako International, to learn more about the Hammer Head® Swim Cap, a major, new cap design for improved performance and athlete safety.

SWIMSWAM: We’ve heard a lot about the new Hammer Head Swim Cap – tell us what it is and does?

David Burns: Think of it like a dome cap in high gear. The Hammer Head is the world’s first and only swim cap designed for both enhanced performance and improved safety. It looks and feels like a traditional silicone swim cap but features a proprietary and patent-pending safety feature to help protect swimmer’s heads from collisions with other swimmers and pool walls. And because we’ve designed the Hammer Head from one seamless piece of silicone, there are no top of cap wrinkles that cause drag in the pool.

SWIMSWAM: Do you wear the Hammer Head instead of your competition or team cap?

DB: No, not at all. Athletes can wear the Hammer Head in practice or in competition and wear their team or competition cap over the top for a wrinkle-free, compression fit. We see it more like a piece of critical gear in your bag like your kickboard or fins. Wear it for confidence, protection and it may even help you cut a little time – the name of the game.

SWIMSWAM: Tell us more about Hammer Head production and what makes the cap unique?

Theresa Finn: Well, David, myself and our engineering team have been working on the design for four years, consulting with athletes, coaches and officials in the national swim community. The result is a cap with several unique features. Firstly, HIT Honeycomb Impact Technology® is a layer of patent-pending honeycomb material inside the top of each cap, that helps to absorb and dissipate the shock of impacts with other swimmers in the water or pool walls. It can’t be seen from outside of the cap and weighs only a little more than a traditional cap. Secondly, Hammer Head features an evolved fit and cut that we called TEKFIT®. It sits lower in the sides over a swimmer’s ears, to help prevent the in- and out- flow of water that can cause swimmer’s ear infections, and as I said, it’s made from a seamless piece of premium silicone fit for a wrinkle free fit to reduce drag. The result is a much more hydrodynamic and comfortable fit. For those athletes swimming in open water, it also provides greater insulation against the cold.

SWIMSWAM: Is there a big need for head safety protection in swimming?

Theresa Finn: The short answer is yes, and more than any swimmer realizes. But the same lack of awareness has played out in other sports too. Hockey players balked and people laughed when helmets were first introduced into hockey, the public didn’t know about the prevalence of concussions in the NFL until very recently, and look what’s happening in youth soccer today. New regulations were just passed preventing young players below the age of 14 years old from heading the ball. What’s worrying to us is that all of these other sports have mandated some form of protective headwear while swim has seen nothing, or very little, done to protect athletes’ heads – until now.

David Burns: The numbers are actually alarming. National swim statistics show that in 2017 just under 70 percent of swimmer head injuries occurred during practice in busy pools. A little more than 30 percent happened at swim meets, primarily during warm up, and of all these injuries, 70 percent were caused by collisions with the wall, bottom of the pool or other swimmers.

I’ve seen it personally in the pool too. I’ve been a swim coach and instructor for more than 20 years and I can’t tell you the number of times I’ve seen young swimmers backstroke into the wall, or older swimmers collide in busy practice pools. Think about crowded open water triathlons or synchronized swimming too, where the chance of injury is huge. Just a few months ago two Alabama college swimmers collided in the last meet of the regular season and one had to be flown to hospital nearby. Whatever your age or skill level this can definitely happen.

SWIMSWAM: It’s a great idea. How did Hammer Head come to be?

DAVID BURNS: Like all great innovations, Hammer Head started with an ah-ha moment. Five years ago, I was coaching a swim team practice at a local country club pool in Minnesota with 40 kids in the pool when Madeline, my daughter, hit her head on the wall doing a backstroke finish. She started crying in pain. I checked her out and while I was doing that, an older swimmer hit her head even harder – and had to leave the pool with what turned out to be a minor concussion. I said later “what do I need to do to protect you – get you a helmet?” Madeline replied, “PLEASE!” and that was it – the idea for the Hammer Head Swim Cap was born.

THERESA FINN: I was at that practice with my son, Kaden, a competitive swimmer on the team and saw the whole thing. It was a real moment of clarity that these things actually happen and there has to be an answer for giving swimmers protection in the pool. Fast forward to today and after years of intensive design, engineering and product testing we have introduced what we hope is going to be a real step forward in protecting all kinds of swimmers and other aquatic athletes.

SWIMSWAM: What has reaction been like to Hammer Head?

THERESA FINN: Overwhelming and incredibly supportive – universally. David and I have traveled the country and met with high-ranking swim officials at the national and regional levels. Everyone is intrigued and asking really smart questions. One thing we’ve heard over and over again is that awareness of the risk in swimming is spreading quickly. If you need any proof of that, just look at insurance companies who won’t provide coverage to swim organizations that don’t have concussion protocols in place.

SWIMSWAM: And where is Hammer Head today? Is the product available now?

THERESA FINN: Yes. Athletes, coaches, clubs and parents can buy it online at [email protected] and we’re working on our first shipment to retail stores in Minnesota right now. More regional and then national retail will follow. By going online clubs and coaches can also get special discounts and free shipping for volume orders.

THERESA FINN: We’re currently introducing the Hammer Head in a variety of colors as well as different sizes, especially for young swimmers. Right now we’ve focused on the enormous competitive swim and triathlete communities in the United States, but we know there are all kinds of need from beginners to swimmers with special needs too. The Hammer Head PLUS for special needs swimmers is currently in development. This cap will feature HIT Honeycomb Impact Technology® all over the interior of the cap for maximum protection. Follow us on our social media channels for the latest updates on new products.

SWIMSWAM: So would you say you’re on a mission?

DAVID BURNS: You could say that! We’re on a mission to improve head safety – and performance – one cap and one head at a time. If we can help even one swimmer avoid a head injury in the water, it’s all worth it. We’re also in a lot of encouraging, high level talks with national and regional swim organizations and clubs all over the country to see how we can help spread the word about head safety in the water.

David Burns is a successful entrepreneur, experienced swim coach and part of the leadership team of Martha Burns Swim School. Theresa Finn is a 20 plus year branding and sports apparel executive. They created Mako International to design, manufacture and market the Hammer Head Swim Cap starting in 2014. More info: www.hammerheadswimcaps.com.

Hammer Head is a SwimSwam partner.

How is this legal for competition? This cap is ultra thick, which will aid in buoyancy much like the caps from 2004 that we’re outlawed after 6 months

“Compression fit.” Huh. Is that needed over someone’s bony cranium? Gotta be sure those temporalis muscles don’t get fatigued.

No… imagine a loose football helmet….. or sitting in a car with no seatbelts. It’s a protection feature more than it is a performance feature.

I think I maybe hit my head once I’m all my years swimming, and that experience was enough to stop it from happening ever again…

This is ridiculous, how many times do people actually hit their head swimming? You can hit your head more doing day to day things, should everyone wear a helmet?

You know, I’m old school, no cap even in competitions. I don’t think this product is for me personally but I can count on 2 hands now the number of athletes who have lost 6 months+ to concussion and concussion-like symptoms.

I think this is a great product for those rehabbing after an injury and need to protect themselve. As well, para-swimmers this is a godsend. It may not personally apply to you and may be more of a niche market than you think but it absolutely has a place.

… and to answer how many times you hit your head, it takes only once as I’m sure you are aware. Airbags in cars are not useless if they are… Read more »