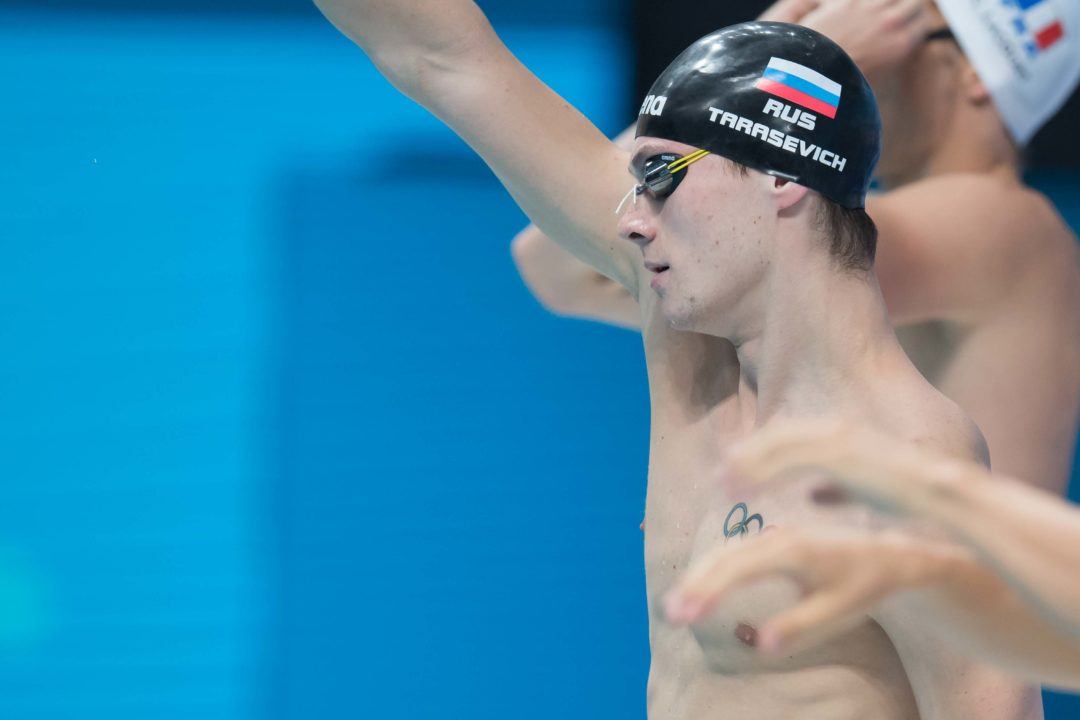 Grigory Tarasevich qualified for the Russian Short Course Worlds team on the final night of Nationals in the men's 200 back. Archive photo via Mike Lewis/Ola Vista Photography

A total of six swimmers added their name to the Russian Short Course Worlds team on the final night of their National SC Championships in Kazan, and there was also a new Russian Junior Record set by Kliment Kolesnikov.

In the men’s 100 freestyle final, 22-year-old Vladislav Grinev won a tight battle with Kolesnikov in a time of 46.39, getting him under the qualifying standard (46.58) and thus earning the second individual spot for Hangzhou behind Vlad Morozov (who went 45.16 at the Tokyo World Cup). This was his last chance to make the team after finishing 5th in the 200 freestyle (top-4 make the relay), where he led the field through 150 metres before fading on the last 50.

Kolesnikov, who had gone 4/4 coming into the race with wins in the 50/100 back and 100/200 IM, suffered his first individual loss in a final by just .04 in 46.43. While he misses attaining an individual berth in a 5th event for Worlds, he does slot himself in for the 400 free relay, as did 3rd place finisher Sergey Fesikov (46.88). This was also Fesikov’s last chance to make the team after he was bumped off by Morozov in the 100 IM.

Kolesnikov’s swim also broke his own National Junior Record in the event, lowering his 46.55 from last year’s nationals.

Also adding their name to the roster on the final day was Yaroslav Potapov, Maria Temnikova and Svetlana Chimrova.

Potapov had a back and forth battle with Martin Malyutin in the men’s 1500 timed final, with Malyutin ultimately pulling off the win with a final 50 of 24.81 for a final time of 14:32.10. Potapov was six-tenths back in 14:32.73, as they both got under the qualifying time of 14:33.25 and move into 3rd and 4th in the world behind only Mykhailo Romanchuk and Florian Wellbrock. Both swimmers also crushed their previous best times, as Malyutin’s was 14:45 and Potapov’s 14:41 coming into the race.

Also noteworthy was 3rd place finisher Ernest Maksumov, who improved his best by over eight seconds in 14:36.01 to move into 7th in the world.

Temnikova made her way onto the team in the women’s 200 breast, clocking in at 2:18.85 to surpass both the qualifying time (2:19.68) and Vitalina Simonova‘s showing at the World Cup (2:19.53). Yuliya Efimova (2:16.29) was holding down the first spot in the event, and Temnikova needed to beat out Simonova to get on the team and did just that. Daria Chikunova also got under the qualifying time to take 2nd in 2:19.57.

Chimrova won the women’s 100 fly in 57.07, and even though she missed the qualifying standard of 56.44, will make the team for the medley relay. She had also won the 200 fly earlier in the meet but the missed the time there as well.

The projected Russian roster for Short Course Worlds is below. This comes before any coaching changes that could come (the criteria also indicates that up to four junior swimmers may be added). This projection is purely based on the results of this meet and the Tokyo World Cup. There are a total of 30 swimmers, 18 men and 12 women, projected to make the team.