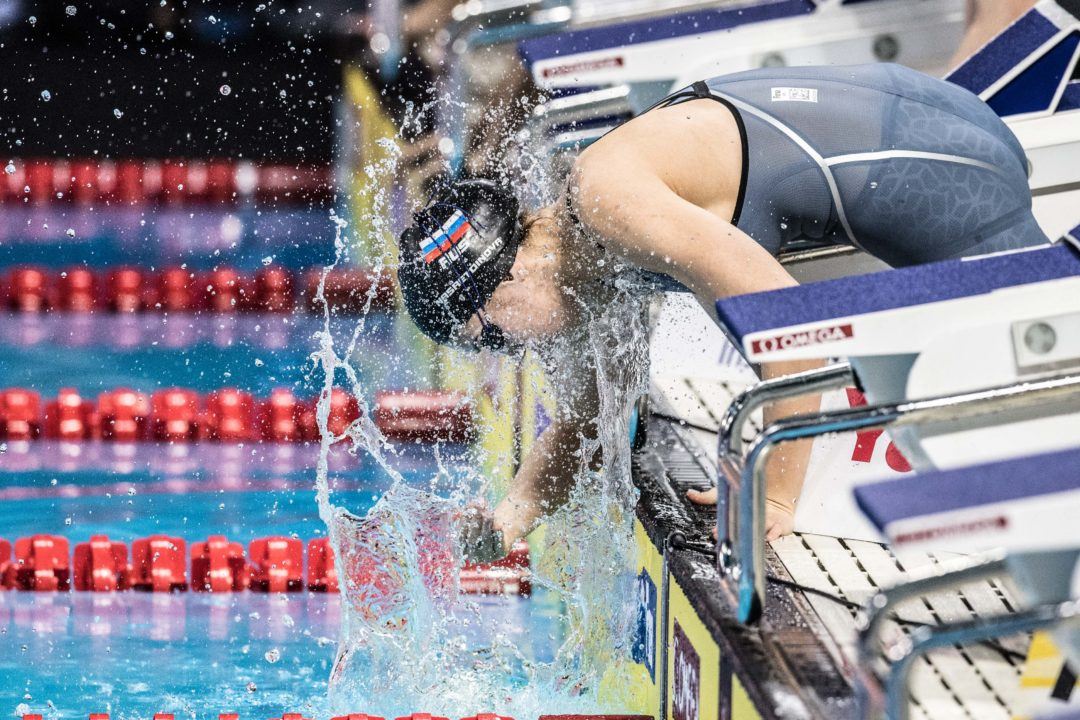 In the women’s 50 fly, Rozaliya Nasretdinova picked up the win in a time of 25.37, breaking the national record of 25.60 set in the semi-finals by Arina Surkova. The swim also got Nasretdinova under the SC Worlds qualifying time of 25.42. Surkova placed 2nd in 25.71, and youngster Aleksandra Sabitova was 3rd in 26.10, seven one-hundredths off the national junior record.

In addition to Sorokina’s junior record, Kliment Kolesnikov took out two in the men’s 100 IM and 50 back finals.

He won the 100 IM in 51.35, lowering his previous record of 51.78 and putting himself well inside the qualifying time of 52.10. Sergey Fesikov was 2nd in 52.06, also under the time, but after Vlad Morozov tied his world record in 50.26 at the Tokyo World Cup, he’ll take the other spot in the event at Worlds over Fesikov.

Kolesnikov then won his fourth individual event of the meet in the 50 back, blasting a 22.82 to erase his previous national junior record of 22.83 set at the 2017 European SC Championships. Both he and runner-up Evgeny Rylov (22.97) were under the World qualifying standard of 23.17 and will take the two spots for Hangzhou. Morozov was expected to be a potential challenger for an individual berth in this event as well, having been as fast as 23.29 in Budapest, but he was a surprisingly slow 26.49 in the Tokyo prelims (which more than likely was due to a slip on the start, seeing as his slowest prior swim on record is a 24.57).