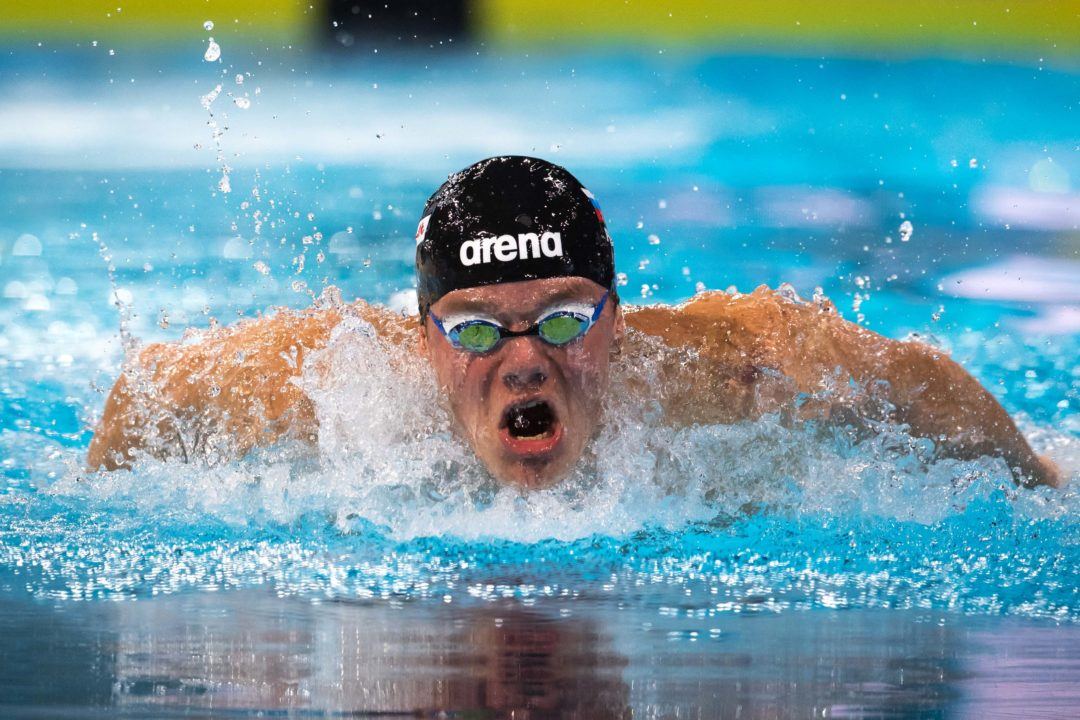 Daniil Pasynkov added his name to Russia's SC Worlds team at their National Championships in Kazan with a big win in the men's 400 IM. Archive photo via Mike Lewis/Ola Vista Photography

Daniil Pasynkov was the lone swimmer to add his name to the Russian Short Course World Championship roster on the penultimate day of their National Championships in Kazan, winning the men’s 400 IM in a time of 4:04.82 to rank him 6th in the world for the season.

That swim got him under the qualifying standard of 4:05.29, which was also his previous best time, and brought him within a second of Semen Makovich‘s national record of 4:03.91. Aleksandr Osipenko was the runner-up in 4:07.31, and Maksim Stupin took 3rd in 4:08.08.

Also coming out on top in individual finals was Mikhail Vekovishchev in the men’s 50 fly, and Anastasiia Fesikova in the women’s 50 back.

Vekovishchev won in a time of 22.72, beating out Nikita Korolev (22.94) and Roman Shevlyakov (22.98), just missing the qualifying time of 22.56 (he’s already qualified for the team in the 800 free relay). At the Tokyo World Cup, Vlad Morozov won gold in this event in 22.29, earning him a fourth individual berth for Hangzhou.

The veteran Fesikova won the 50 back in 26.94 over national record holder Maria Kameneva (27.03), falling short of the 26.40 qualifying standard. Both swimmers are already on the roster, with Fesikova in for the 400 medley relay (won the 100 back but missed the individual qualifying time) and Kameneva has made it in the 100 IM and 400 free relay.

In addition to Morozov’s 50 fly qualifying for SC Worlds on the final night in Tokyo, Yuliya Efimova added the 50 breast to her schedule with a showing of 29.56, and Kirill Prigoda (2:01.30) and Anton Chupkov (2:01.57) both crushed the 200 breast standard to bump National champ Mikhail Dorinov off the team.

With one day of Nationals remaining, their roster for Hangzhou currently looks as follows:

*denotes that the event has yet to be contested at Nationals