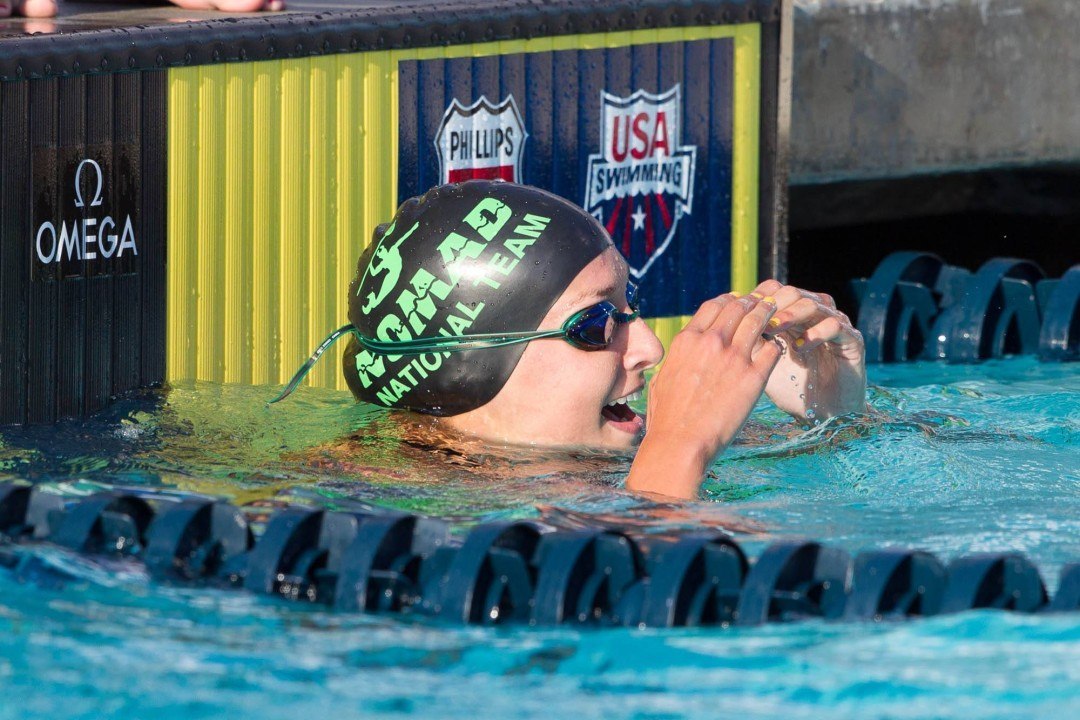 Emily Allen will be making her international debut for Team USA this winter in Doha, Qatar. Archive photo via Tim Binning/TheSwimPictures.com

USA Swimming has announced several changes to their roster for the 2014 World Short Course Championships that will run from December 3rd-7th in Doha, Qatar.

Three athletes have scratched the meet: former Olympic medalists Nick Thoman, Cullen Jones and Katie Hoff. Hoff and Thoman have both dealt with injuries in the last year, and for Hoff, she acknowledged the impact on her decision.

“I am disappointed to share that I have decided to withdraw from the SC Worlds team,” Hoff said in a statement. “The opportunity to represent Team USA in international competition is an honor but I do not believe it would be right for me to do so when I am not 100%.

“As many of you know, I had to withdraw from my events at US Nationals earlier this summer for what was initially diagnosed as an intercostal strain, but I have since learned that I was dealing with two blood clots in my lungs. As a precaution, I have been advised to avoid international air travel for the time being.”

Hoff’s injury was originally announced in August as being an intercostal strain, but with this announcement makes that injury a much more serious one.

Jones’ one entry in the 50 free will be filled internally by Jimmy Feigen.

Godsoe will directly take Thoman’s spot and race in the 50 and 100 meter backstrokes (and, one would presume, in the 400 medley relay in either prelims or finals).

The replacement of Hoff won’t be quite as straight-forward: as we reported last week, Katie Drabot is taking Hoff’s swim in the individual 200 free,a nd was already on the relay. That opened up another roster spot, which USA Swimming has extended to Allen as a member of the 800 free relay. Drabot will still be expected to swim that 800 free relay.

While Thoman is the World Record holder in short course meters in the 100 backstroke, Godsoe has spent the year racing the FINA World Cup circuit, and presuming he has enough left should be a threat in Doha. He won five individual events between the 50 and 100 backstroke during this year’s series, and was tied for 9th in the overall series standings.

As for Hoff’s withdrawal, that will hurt the 800 free relay when comparing a healthy Hoff, but a healthy Hoff is not what the Americans would have gotten. Allen has never raced short course meters according to the USA Swimming database, but has a 1:46.7 in 200 yards and a 1:59.35 in long course meters, indicating that she’s got all bases covered in the event.

WTG, Emily! She’s a terrific young woman and will represent USA as well as she has represented North Carolina! That’s 2 NC products now added (Godsoe originally from NC as well!)

Just curious, was there a the reason for Cullen Jones withdrawing?

curious – none has been given, and I’m not aware of any.

What injury has Cullen Jones been dealing with over the past year?? And why has he suddenly pulled out of the competition