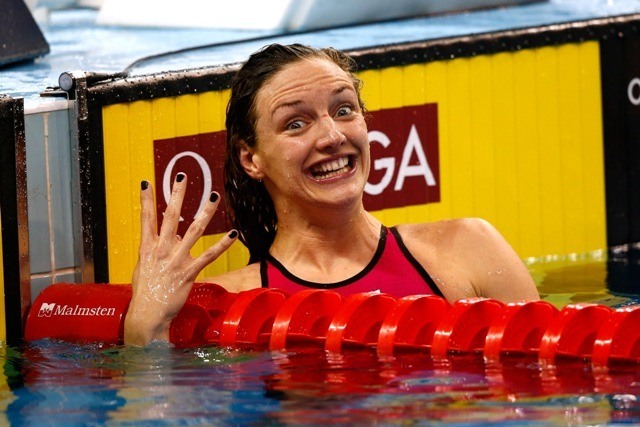 After making over $300,000 on the World Cup Tour this year, Hungary’s Katinka Hosszu has made nearly half a million dollars in prize money this year in the short course pool alone. She made $106,000 based on her individual swims this week in Doha, easily leading all athletes.

FINA gives out prize money to the top 6 athletes in each event, plus bonuses for World Records. Here is the prize money system:

That big world record bonus means that the 8 individual world record-breakers all place highly in the total money-earners. Hosszu made $60,000 that way for her 4-world record performance.

Second is Mireia Belmonte, who broke 2 world records and went 4-for-4 on individual golds. She earned $58,000, just a tick more than double-world record-setter Sarah Sjostrom ($56,000).

The highest-earning man individually was Florent Manadou, who made $49,000 on his two world records and three individual medals.

The top 10 money-earners based on individual events are below. Ryan Lochte and Kosuke Hagino are the only two to make the top 10 without setting a world record, a testament to their versatility. Lochte, in fact, made $16,000 without earning an individual gold medal, courtesy of two silvers and two bronzes.

Swimming is given 5th place in Greatest Moments of sports from 2014.
check the list and video here http://bit.ly/gsm14

Hosszu’s blatant double dolphin kicks off the wall in the breaststroke leg of her 400 IM would have been comical if they weren’t so revolting.

Hosszu’s blatant double dolphin kicks off the walls in the breaststroke leg of her 400 IM were revolting. No underwater video of 100 & 200 IM from Universal Sports to confirm whether the cheating is habitual.

Thank you for the videos, I can’t find the 100 fly women video, it was on swimswam but only viewable from USA.

That’s why I posted the videos from youtube because people outside of USA can’t watch the Universal Sports Network videos.

Rest of videos. Thanks to USA swimming. We just needed to ask. 🙂

And finally women’s 100 back
https://www.youtube.com/watch?v=HyN-QvOCXIA