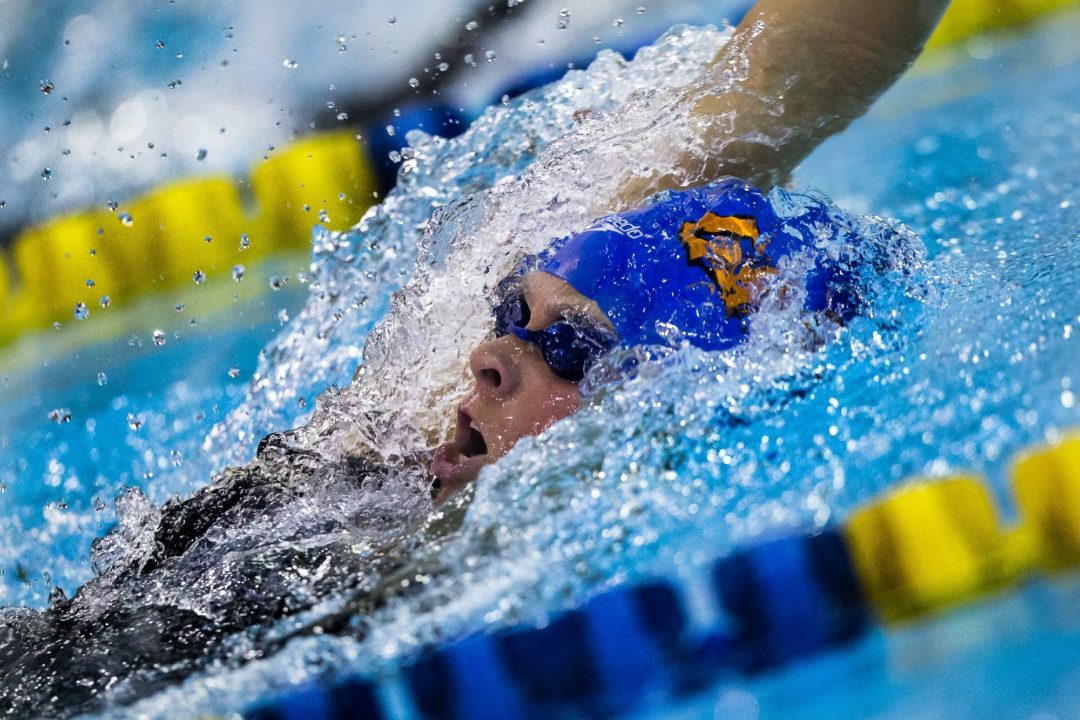 Elizabeth Beisel had a huge performance in back-to-back events to turn the tide for the University of Florida. Archive photo via Tim Binning/TheSwimPictures.com

The University of Pittsburgh men and women swept in-state foe Villanova at Trees pool in Pittsburgh on Thursday afternoon.

The Virginia men’s and women’s swimming and diving teams host North Carolina on Friday afternoon and NC State on Saturday at the Aquatic and Fitness Center.

The first commit to the Panther’s class of 2027, the rapidly improving Kennedy will come to the University of Pittsburgh in the fall of 2023

The Florida State Seminole women came within 6 points of beating instate rivals Florida on the road, but the Gators escaped with a narrow victory in their first 2014 action.

The Gator men had a much easier go of it, winning 12 of 16 events in a cruising victory. “We were real sloppy,” Florida coach Gregg Troy said in the University of Florida’s coverage of the meet, but he also noted that several Gators have been battling the flu as of late.

Last year, the Seminoles upset Florida at home, and though this season made for perhaps tougher sledding (and required them to go on the road), it looked for awhile as if Florida State might be starting an upset streak.

All diving events took place Thursday, and after going 1-2 on both boards (Kelsey Goodman scored 292.50 on 1-meter followed by Ariel Rittenhouse, while Katrina Young won 3-meter in 298.95 with Goodman second), FSU sat on a 29-9 lead until Saturday’s swimming session kicked off.

Florida started eating away at the lead early, crushing the field in the 400 medley relay for the big relay points. The team of Sinead Russell, Hilda Luthersdottir, Ellese Zalewski and Natalie Hinds went 3:42.27, buoyed by their fast front half – Russell was 55.2 on backstroke and Luthersdottir went 1:01.84 on breast, both the fastest splits in their respective strokes by nearly a full second. FSU took second and third with their consistent and deep relay squads.

The Gators then went 1-2-3-4 in the 1000 free, with senior Alicia Mathieu leading the way in 9:55.24. Jessica Thielmann was second, Jordan Smith third and Autumn Finke fourth. Though only three of the four could score points, the event still all but erased FSU’s huge diving lead.

Kicking off the second portion of the meet, Dressel/Oliver were at it again, going 50.49 and 50.84 to sweep the top two spots in the 100 free, and after surviving an early Florida scoring streak FSU looked like a sudden juggernaut.

But that’s what studs are for: to turn momentum around in a hurry. Florida Olympian Elizabeth Beisel won her second race of the night in the 200 back, going 1:58.49 to blow away the field. Her teammate Ashlee Lin was second, just as she was in the 100 back to start another Florida scoring spree.

Hilda Luthersdottir completed her breaststroke sweep by taking the 200 in 2:17.09 and Beisel swam back-to-back races, taking second in 2:18.24 to turn things around for the Gators.

Julia Henkel won the 400 IM in 4:22.38, but when Florida went 2-3-4, the damage was done and the Gators needed only two more points from the final relay to break the meet-clinching 150-point barrier.

FSU took first and third in the 200 free relay, riding their sprinting prowess that turned things around for them early in the meet. The relay team of Tiffany Oliver, Kaitlyn Dressel, Laura Flewelling and Sami Pochowski were 1:32.97 with a fast 22.3 split from Dressel to beat out Florida’s top team, but it wasn’t enough to get by the home team in total points.

The men’s meet was a much less back-and-forth affair, but FSU did jump out to an early lead by sweeping Thursday’s diving events. Tom Neubacher won both 1-meter (351.75) and 3-meter (342.60), and the Seminoles went 1-2-3 on the 1-meter board to grab an 18-point lead heading into the swimming portion.

That lead evaporated pretty quickly, though. Florida cut it in half in the 400 medley relay when the team of Corey Main, Eduardo Solaeche-Gomez, Marcin Cieslak and Bradley deBorde won in 3:15.09. FSU was just behind in 3:15.83, but Solaeche-Gomez’s 54.9 split was the difference – FSU’s Jared Pike was only 56.2, although Matt Elliott actually outsplit the field from the Florida B relay with a 54.0.

The only swimmer Florida couldn’t seem to get by was FSU senior Pavel Sankovich, who dominated his events in much the same way his teammate Tom Neubacher dominated the diving well. Sankovich was 47.33 in the 100 back to win easily, although Florida did go 2-3-4 to keep the score difference manageable.

Andrea D’Arrigo won his second event when he went 4:25.27 in the 500 free, an easy win over teammate Sebastien Rousseau.

FSU got its fourth and final win from Pavel Sankovich in the 100 fly – he went 46.49 to win by a second and a half, and teammate Connor Knight added a second-place finish for the ‘Noles.

Finally, Florida won the 200 free relay to cap off a dominating performance. Bradley deBorde led off in 20.1 and Corey Main anchored in 19.83. In between were Sebastien Rousseau and Marcin Cieslak – the relay was 1:21.12, a tenth ahead of FSU’s 1:21.22. The Seminoles took the lead on Paul Murray’s 19.9 split in the #2 spot, but couldn’t hold off Main on the closing leg.