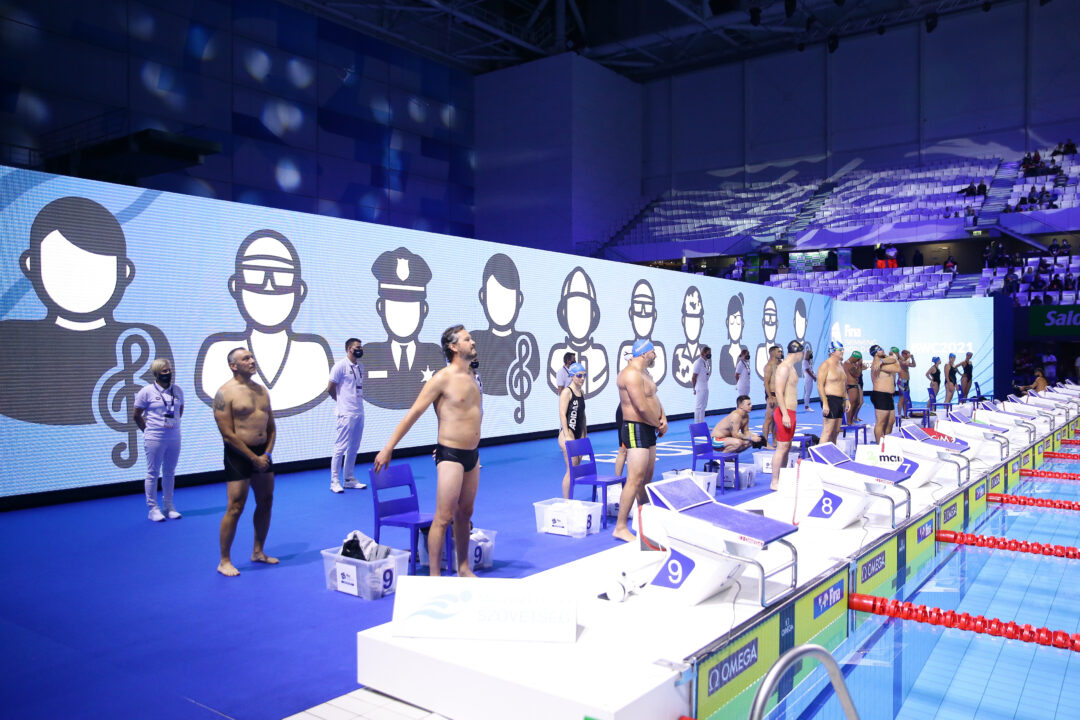 The 2nd leg of the 2021 FINA Swimming World Cup was held in Budapest between 7-9th October. As you may recall from previous editions our approach to event organization has always been to provide some extra entertainment and a show for the fans. In 2018 we invited Eric Moussambani who was a great ambassador in promoting swimming and spread the message that one does not need to be a top athlete to participate in our beloved sport. During the two separate Eric Challenges he first swam against top Hungarian athletes coming from other disciplines (we had a well-known and decorated gymnast, a short-track speed skater, a track and field athlete, a fencer, a wrestler and a football player in the field), while in the second contest he swam against everyday people, enthusiastic amateurs, who learned to swim in the weeks/months before the event.

A Year later in 2019 we organised an “Actor relay” where eight 2-member teams had to complete a 2*50m swim. We had actors, actresses and other celebrities such as a radio presenter from a popular morning program, so again it was a fun way to spread the word about the World Cup and to generate some hype.

In 2020 the whole series was cancelled due to COVID measures, so it was a kind of taken for granted that we would continue our tradition when we became hosts again in 2021.

In the past year and a half appreciation has been shown to frontline workers in many ways ranging from “Thank you” messages and banners as a form of venue branding (just like we did during the LEN Europeans which had to be held in a bubble) to complimentary tickets provided to healthcare staff. At the 2021 Superbowl the league welcomed 7.500 healthcare workers who were offered a pregame show by Miley Cyrus and 1/3 of the entrance tickets.

On top of providing an almost similar proportion of complimentary tickets (due to ongoing health concerns we had a max. 50% capacity of guests who were allowed to enter with a vaccination certificate) for frontline workers we also wanted to provide them a unique experience. That’s how the idea of our third relay was born. We decided that this time a special relay would be organized with the involvement and active participation of frontline workers and that of well known local performers coming from different musical genres (opera, pop, rock..). During the pandemic it’s often been mentioned what a hard time performers have faced due to the continuous cancellation or postponement of their concerts/festivals, as they could not stand on the stage and entertain their music fans.

On the first night of the 3-day event we held a frontline workers vs. musicians relay. We were pleased that at the first time of asking the Semmelweis University cooperated in delegating doctors and nurses, Hungarian Army sent soldiers, and we had teams of police officers, firefighters, teachers and 3 teams of musicians making it a total of 10, four-member relays! In the short course format we came up with a somewhat unusual 4*25m race causing some extra headache for the official timekeeper OMEGA.

The race proved to be a great success with the fans and what’s even more important our “gesture” which gave the centre stage (this time the swimming pool) to frontline workers was highly appreciated by those groups who work so bravely for us, day by day, regardless of whether there is a global pandemic or not. In the race the team of police officers reached the wall first, but everyone felt that on the given night each and every participant was a winner. A big thank you to our frontline workers, to our performers and to everyone who contributed to this program. Stay safe everyone!

PS. the second night of the World Cup was just as memorable when we held a farewell event for László Cseh, one of the icons of Hungarian and international swimming. The story of the night is summarized here.