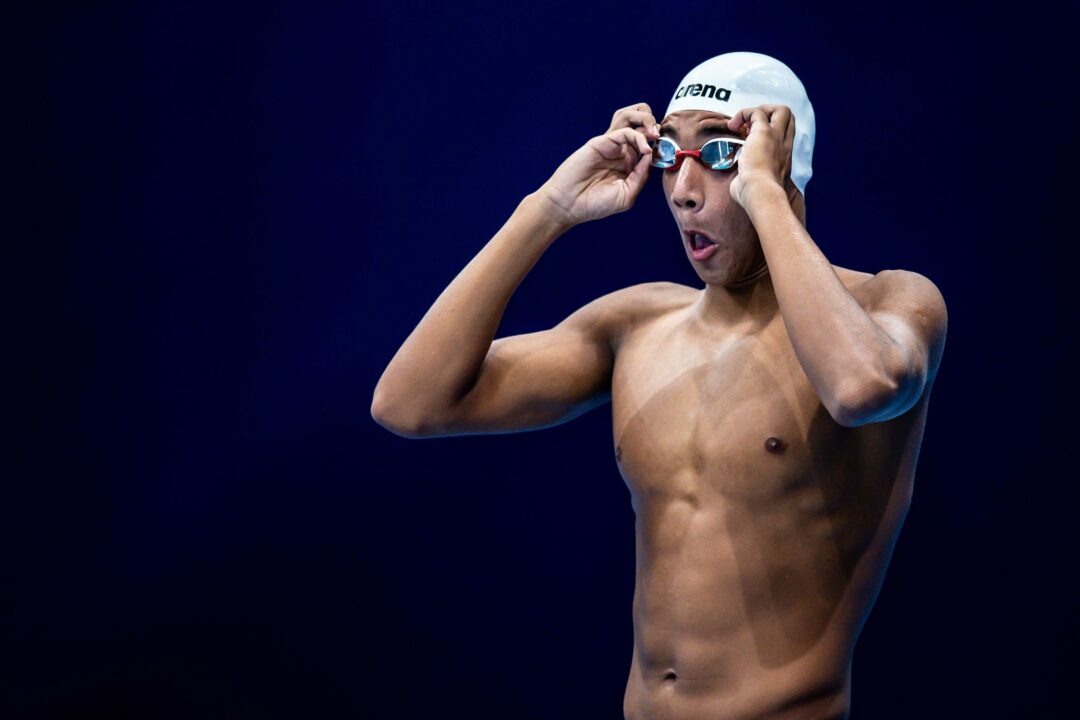 Take a look at the 6 swimmers who went from not racing a particular event at the 2019 World Championships to winning gold in that event at Tokyo 2020. Archive photo via Jack Spitser/Spitser Photography

In the 2 years that separated the 2 meets, we saw a number of swimmers like Emma McKeon evolve from elite-level racers to Olympic gold favorites and we saw another group of swimmers like Lydia Jacoby transform from never-been-heard-of-before to Olympic podium hopefuls.

The latter group is arguably the most fascinating. This unusual timeline resulted in a gaggle of Olympic champions who not only didn’t win their event at the most recent World Championships, but didn’t even compete in Gwangju.

Ahmed Hafnaoui is a member of the first group; those who were not in Gwangju in any capacity. The Tunisian distance swimmer was arguably the biggest surprise of the Games as he won Olympic gold in the men’s 400 freestyle with a 3:43.36 from lane 8. Hafnaoui had swum a 3:45.68 during the prelims of the event which was just ahead of Swiss swimmer Antonio Djakovic‘s 3:45.82, meaning he was only 0.24 seconds away from not even being in the final.

The next Olympic gold medalist who wasn’t in Gwangju is the aforementioned American breaststroker Lydia Jacoby. Jacoby was a relatively unknown swimmer in the lead-up to the Games but began garnering attention in April when she hit a 1:06.38 at the Mission Viejo stop of the TYR Pro Swim Series, breaking 1:07 for the first time. From there, Jacoby continues to put up some solid swims and managed to bring it home at Olympic Trials when she hit a 1:05.28 in the final to defeat an elite heat of breaststrokers and join Lilly King on the US Olympic team.

What makes Jacoby’s story the most compelling is that not only did she win Olympic gold after not swimming at 2019 Worlds, but the Tokyo Olympics was actually the first time she ever raced internationally for the USA.

The third and final gold medalist in Tokyo who wasn’t in Gwangju is American Bobby Finke who topped the podium in both the 800 and 1500 freestyle. While Finke didn’t swim for the USA at the 2019 World Championships, he did race at the meet in 2017 in Budapest and placed 21st overall in the 1500 with a 15:15.15. He improved upon that time significantly in the 4 years that separated Budapest and Tokyo where he won gold with a 14:39.65. In addition to the 1500 free, Finke won Olympic gold in the 800 free with a 7:41.87 American record.

Along with Hafnaoui, Jacoby, and Finke, another 3 gold medalists in Tokyo won an event that they didn’t swim in Gwangju, despite having swum 1 or more other events. Great Britain’s Tom Dean, for example, swam the men’s 200 IM at 2019 Worlds 2 years before winning 200 freestyle in Tokyo. Dean placed 11th in the 200 IM while Duncan Scott and James Guy took care of the 200 freestyle for Britain in Gwangju, placing 3rd and 11th, respectively.

Emma McKeon who won gold in both the 50 and 100 freestyle in Tokyo actually didn’t race the 50 freestyle 2 years earlier. McKeon placed 3rd in the 50 freestyle at 2019 Australian Trials to Cate and Bronte Campbell but did qualify to race the 100 free, 200 free, and 100 fly.

The last Tokyo event-winner who didn’t race the event in Gwangju is a bit of an asterisk. While Katie Ledecky didn’t race the final of the women’s 1500 freestyle in Gwangju due to illness, she did technically race the event, just not in its entirety. Ledecky swam the prelims of the women’s 1500 and hit a 15:48.90 to qualify 1st into the final before pulling out of the second round.

*As noted above, Ledecky raced the 1500 freestyle prelims but did not race the final

Of those Olympians who both swam their event in Gwangju, 7 swimmers won gold at both meets (Caeleb Dressel accomplished that feat in 3 separate events). Another 4 swimming went from silver in 2019 to gold in 2021 in Evgeny Rylov, Ariarne Titmus, Kaylee McKeown, and Tatjana Schoenmaker, while Yui Ohashi went from winning bronze in the 400 IM in 2019 to gold in Tokyo. Ohashi’s other swim in Gwangju ended with a disqualification in the 200 IM final.

Both Emma McKeon and Zac Stubblety-Cook went from a 4th place finish for Australia in the 100 free and 200 breast, respectively, to gold in Tokyo, while Wang Shun jumped from 5th in the 200 IM. USA’s Chase Kalisz didn’t make it past the prelims back in 2019, placing 10th in the 400 IM before topping the Tokyo podium.

Note: The times listed represent times swum in the latest round of racing that each athlete qualified for, not necessarily their fastest time at the meet.

I thought a prerequisite to swimming the Olympics according to FINA rules is that they must have participated in the most recent World Champs?(ie Gwangju)

There is a rule that you have to have raced in the previous World Championships to receive a Universality spot, though even that rule was suspended for these Games (though there seems to have been some places where it was suspended and some where it wasn’t – turned into a little bit of an administrative sh**show.)

For athletes who qualify via the normal qualifying system, like by hitting Olympic “A” cuts, there is no such requirement, and that’s a good thing. Afterall, that would have eliminated Katie Ledecky from the 2012 Olympics ;-). If that rule were in place for everyone, it would essentially force countries to choose their Olympic Team, to an extent, the year prior.

mm. i could think of about 500 examples that this doesn’t deem true for

I’m fairly sure Dressel went faster than 50.28 in Gwangju

Yes but he set the WR in the SF. The final was slower.