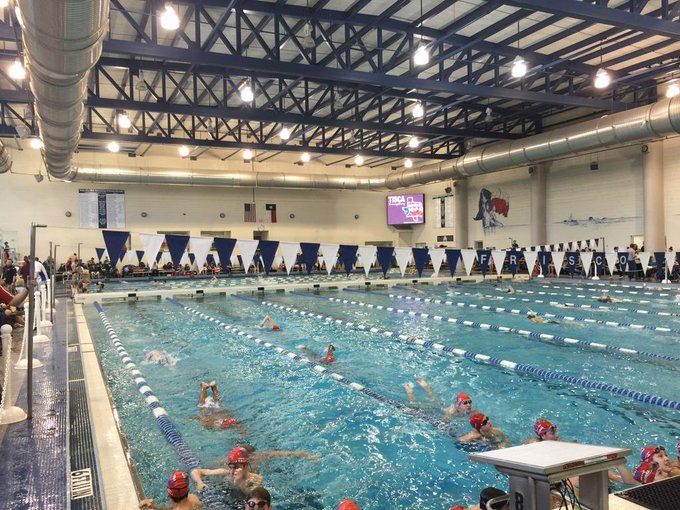 This will give the district a pair of 50 meter pools with significant seating capacities in time for the opening of the district's 11th high school. Archive photo via Frisco ISD

The Frisco, Texas Independent School District is finalizing plans for a new aquatics facility that is targeted to open in the fall of 2021, which will give the district two 50 meter pools to serve its rapidly-expanding student body.

The district’s existing natatorium, the Bruce Eubanks Natatorium, opened in 2003 and in 2015 was named after a former swim coach who launched the district’s swimming program in 2001.

The new pool is planned to be identical in scope to the existing one, according to a presentation by architecture and engineering design firm Parkhill, Smith & Cooper Inc. to the Frisco ISD board at a Nov. 1 meeting. The existing natatorium has an 8-lane 50-meter pool that can be converted into 18 short course yards lanes. That facility seats 800 spectators.

The pool plays home to both the district’s swimming and diving programs, as well as a synchronized swimming club (PTX) and at least 2 swimming clubs (FASST and Texas Ford), among many other activities.

The Frisco Independent School District was first formed in 1876, and remained a relatively-small district until the mid 1990s. In 1995, the district had 4 schools. In the 24-years since, they’ve opened 64 new schools, making it one of the fastest-growing (and largest) districts in the country in one of the country’s fastest-growing cities. The district now has over 60,000 enrolled students among the city’s population of 177,000 in the Dallas-Fort Worth Metroplex. The district will be opening its 11th high school in 2021 – the same time as the opening of the new pool.

The DFW Metroplex is becoming a high-density area for major 50 meter pool complexes. A Lewisville ISD facility played host to a recent stop of the International Swimming League also holds 800 spectators, one of two such large natatoriums in the district, and several other local school districts have built large-scale 50 meter facilities, including Rockwall ISD, Mansfield ISD, and Carroll ISD.

With more than 10,000 boys and 10,000 girls participating in high school swimming & diving, Texas ranks 2nd in the country behind only California.

Can they please make the pool 5 feet longer to provide a wider movable bulkhead!? Timing as a parent is inherently dangerous!

Amazing! It’s simply incredible how much money people are willing to spend on swimming these days. I grew up not far from this area, in a large but less affluent city, and there was one pool in the entire city and they put a bubble on it in the winter. That was where we had to swim. Certainly better than nothing, but nowhere near as nice as a dedicated natatorium. Great news!

Mike, what pool was that?

Not in Austin, they are not willing to spend. Austin and Round Rock ISDs have exactly ZERO closed pools of any length. It is embarassing and disgusting. I bet if building a wall to keep mexicans out bond is up in an election, it would pass overwhelmingly – but no money for kids.

San Antonio even rubs it in by building a 50m outdoor pool next to a 50m indoor pool and then providing chilled water in the summer for the outdoor pool.

I believe you are dead wrong about Austin/Round Rock ISD area would vote overwhelmingly for the wall…the reason why people voted against the aquatic center was the already super high property taxes.

So, property taxes in Austin are so much higher than the ones in Dallas, Houston, or San Antoion, that they cannot build ****ONE**** 25×25 yard closed pool, let alone 2 50m pools that Frisco will have soon? Sick of the same stupid argument we hear every single year.

Vote Up10Vote Down Reply
KNOWS NOTHING

Housing is about 2x more expensive in Austin than it is in Dallas (Frisco), so that doubles ones property taxes. And Winters are quite a bit milder in Austin than they are in Frisco.

Dang. Never pictured Eddie as a “BUILD THE WALL…. LOCK HER UP” kinda guy.

while the current facility is 50m, it is never set up for long-course racing. will be interesting to see if the new one will. currently 11 high schools use the facility. the new facility will be adjacent. infrastructure – roads – will not be altered to allow for more traffic. but since the pools are located at the ISD recreation area, they will share parking with other ISD facilities.

TFA built their own 50m pool a few years ago and they also use Craig Ranch 50m outdoor pool. Therefore having the FISD pool set for 50m is not needed. The Frisco FASST summer team is huge and they take over the pool in the summer for their yd meets. Lanes in the Collin County area are hard to find since swimming is very big in the area.