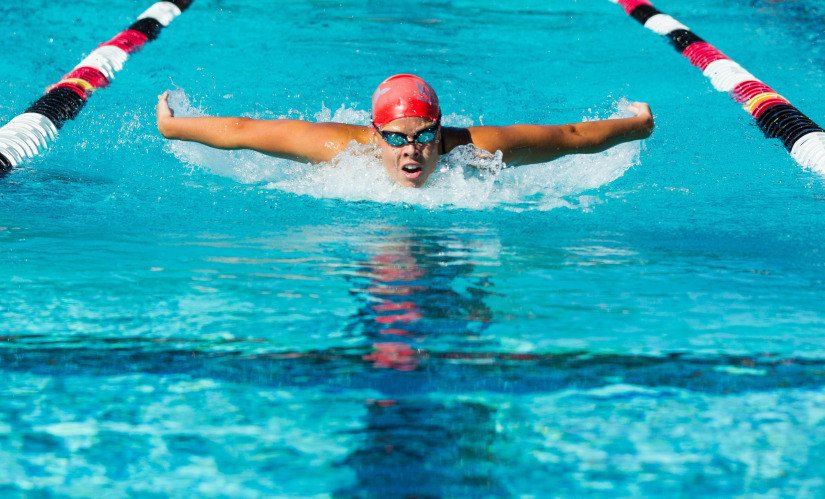 San Diego State and San Diego opened their respective 2017-2018 women’s swimming campaigns on Friday with their annual Pentathlon meet, where each swimmer races a 100 free, 100 fly, 100 back, 100 breast, and 100 IM. Their times in each race are then aggregated and the swimmer with the lowest combined time wins.

The final score of 33-24 in favor of the Aztecs is identical to last year’s score. There were also 50s of each stroke, a 400 IM, and a 500 free swum, though they did not count toward the Pentathlon outcome.

The day, as it so often does, went the way of the breaststrokers. The top 3 finishers in the overall standings were also the three fastest breaststrokers – led by San Diego State senior Frida Berggren. She swam 1:07.38 in the 100 breast, almost 2 seconds better than the rest of the field, and had an overall time of 4:58.57 – averaging better than a minute per event. She also had the fastest 100 fly time (57.29) and the second-fastest 100 IM time (1:00.29 – just two-tenths behind McKenna Meyer’s win there).

Last year, Berggren and Meyer finished 1-2 in the meet with a nailbiter of a finish. Heading into the final race, the 100 IM, Meyer had about a half-second lead, and while Berggren was two-tenths faster, that wasn’t enough to make up the overall gap.

They both finished in 4:54s last season, 15 seconds clear of the field, while this year teammate Alma Thormalm was relatively close in 5:04.96. Thormalm’s total time was only 5:17 last year, representing about a 2.6-second-per-race improvement from last year to this. She dropped time in each of the 5 disciplines, but most noticeably in the breaststroke where she was 4 seconds faster this year (1:09.57) and the 100 IM where she was another 4 seconds faster (1:01.06). She won the 100 free in 52.83 and also placed 2nd in the 50 free in 25.14. She could be due for a big year for the Aztecs if those trends continue.

San Diego State will next race in Reno, Nevada on September 30th at the Nevada Relays meet. The Toreros of USD next swim a two-day dual against USC on September 22nd and 23rd.