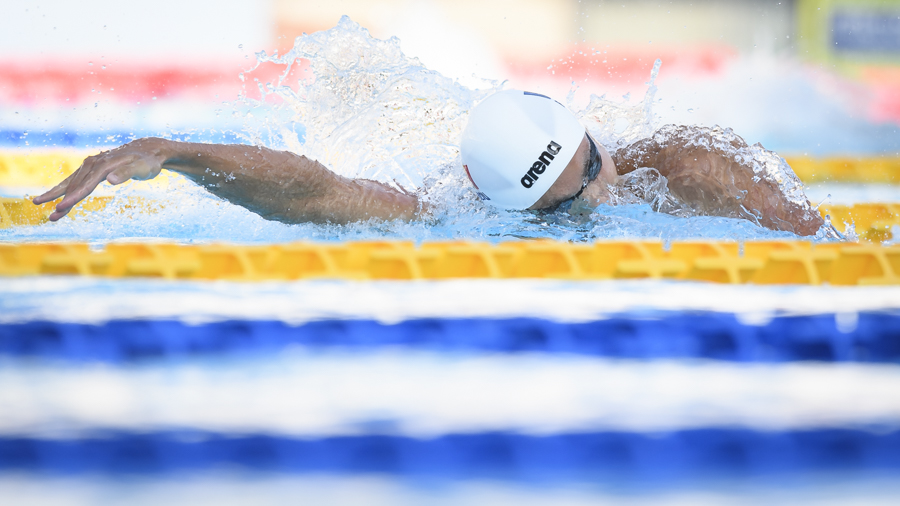 Popovici will be making his Olympic debut in Tokyo and will be on the prowl for a podium finish in both the 100 and 200 freestyles. Archive photo via Andrea Masini / Deepbluemedia / Insidefoto

One of the biggest beneficiaries of the 1-year Olympic delay has been Romanian junior David Popovici. Popovici has emerged over the past few seasons as arguably the world’s best junior swimmer and in the final few months before the Olympic Games has begun settling into the top of the worldwide swimming rankings for both junior and senior swimmers.

Days after his incredibly 100 freestyle swim Popovici notched a 1:45.26 200 freestyle which got him within a second of Hwang Sun-Woo‘s 1:44.96 world junior record from earlier this season. His 200 freestyle national record made him the 7th fastest man in the world for 2020-2021 which will give him 2 top 8 seeds heading into Tokyo 2020.

Popovici will also race the 50 freestyle the Olympics this summer and is entered with a 22.43 which he swam at European Junior Championships. That time is a little bit slower relative to the field that he’ll face at the Games but if there’s one thing we know about Popovici it’s that he can never be counted out.

David Popovici is coming in hot this summer and will have a shot at collecting Romania’s first Olympic medal since their 2-medal haul at the 2004 Olympics in Athens. In 2004 Romania’s Camelia Potec managed to take a gold medal in the women’s 200 freestyle as she raced her way to a 1:58.03 while Räzvan Florea took bronze in the men’s 200 backstroke with a 1:57.56.

While Popovici is certainly the nation’s best shot at a podium finish, Robert Glinta will also be racing in Tokyo and is a bit of a darkhorse in the men’s 100 backstroke. Glinta recently delivered a new Romanian record in the event at the 2021 European Swimming Championships where he took gold in a 52.88. That swim for him makes him the current 13th ranked worldwide this season and 10th seed among those competing in Tokyo. He’s certainly within range to make the final in Tokyo and will have a shot at improving upon his 8th place finish in Rio. Along with the 100 backstroke, Glinte will be swimming the 200 backstroke this summer and is entered with a 1:59.74.

Rounding out the Romanian Olympic roster this summer will be Daniel Martin and Bianca Costea who both swam for the country at the 2021 European Championships. Martin posted a 56.38 in the men’s 100 backstroke at Euros while Costea notched 46th overall in the women’s 50 freestyle with a 26.13. Martin has been a 53.52 before in the 100 back and will also swim the 100 butterfly in which he holds a 52.35 best time.

Interesting to witness the different phases swimswam has gone through since Popovici’s swim.
Last weekend, everyone was on “Popovici cloud 9”. After 10 days, we’ve all finally come down from it and are starting to doubt him for next week lol

Gonna be scary once this kid gets on weights. I feel like that 50 will come along if he can translate that weight room power into the pool.

Oh totally. He’s gotta have that program that can help him put it all together. The 315 one rep max bench press means nothing if you can’t get it to translate in the water.

Just speaking in terms of him getting on the right program.

Maybe some explosive cleans for power and squats with emphasis on the upward motion….just throwing ideas around as I like to dream.

The big difference between Rome and Tokyo, is that he won’t a two body length lead at the end. He’s going to be dealing with some very big men who will be with him or ahead of him. This is a much needed education for the future of this event.

Wait- how do we know he can never be counted out?
How many international races has he swam?
What has he won again?

Obviously this guy is the future of freestyle swimming and is an insane talent, but I feel like everyone is rushing to guarantee that he’ll get a medal, or even talk about him getting gold in Tokyo. The Olympic final is way different from Jr Euros. Can he avoid the wash from other swimmers?

I’d also like to mention the taper cycle. He’s been tapering on and off since like May. You can’t maintain peak condition forever. We’ve seen some young US swimmers (like Curzan) who still swam super fast at trials, but slightly slower than “in season”. I think he’ll be around a respectable 47.6 in the final, which is still insane for a 16 year old, but… Read more »

it will be the fastest semis of all time is my prediction with Popovici getting lane 4. Then he and Caeleb will be within 0.3 of each other.

3
0
Reply
Brownish
Reply to  Sam B

Milák will be there, don’t forget it.