Fratus, Andrew, And Dressel Set For Battle In Men’s 50 Freestyle At Sectionals 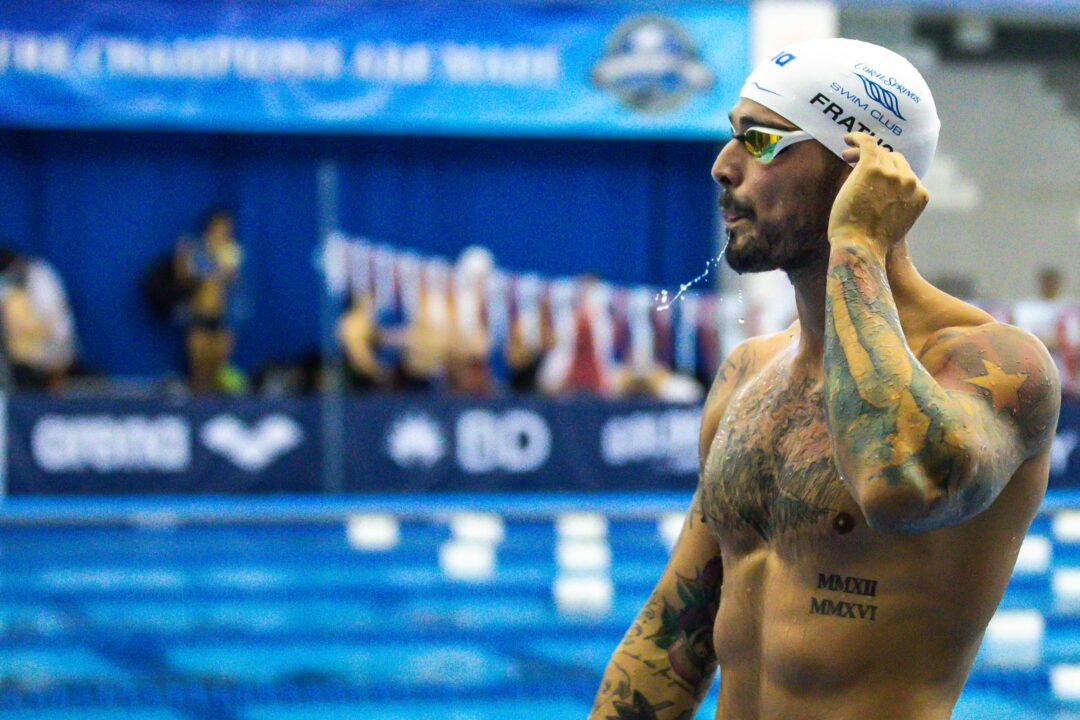 Three of the four fastest men in the Tokyo 2020 Olympic final are set to compete in the men's 50 freestyle final at Sectionals. Archive photo via Jack Spitser/Spitser Photography

Three of the four top finishers in the men’s 50 freestyle Olympic medalists from the Tokyo Games were in the water at Southern Zone South Sectionals on Saturday. Olympic bronze medalist Bruno Fratus posted the time during prelims with a 22.94, while 4th place finish in Tokyo Michael Andrew followed in a 22.97. Olympic champion Caeleb Dressel came in with a 23.24 to land a third-place spot in the final.

We can likely expect a bit of a time drop from the leading trio during the 50 freestyle final considering that their times a few months ago were more than a second faster. Dressel won gold with a 21.07 Olympic record, while Fratus was a 21.55 and Andrew a 21.60.

Another Olympic champion who’s been having quite the week in Orlando is Katie Ledecky. Ledecky swam the 400 freestyle prelims and posted a 4:04.25 to lead the field. Ledecky’s world record in the event sits at a 3:56.46 and she swam a 3:57.36 to win silver at the Tokyo Olympics. She’s already bested her times from the Games in both the 800 and 200 freestyles this weekend, leaving us to wonder what she might unleash during the 400 final.

In addition to his second seed in the 50 freestyle, Michael Andrew will enter the 200 IM tonight with the fastest time, having hit a 2:01.84. Andrew’s fastest time ever in the event came from the Tokyo Olympic Trials in Omaha where he swam a 1:55.26 and qualified for the team in the event. At the Olympics, he placed 5th overall with a 1:57.31.

Andrew will be joined in the final by Florida alum Mark Szaranek who swam a 2:07.84 but has been as fast as a 1:58.07 when he raced for Great Britain at the 2018 European Championships. The third seed in the final is Dario Martin.

Lies. I’m going to win this one

Off topic here, but think if you had a swim complex like the Irvine Great park Ice Rink where gold medalist Nathan Chen practice in and other Olympian skaters The quad king.https://www.msn.com/en-us/sports/winter-olympics/inside-the-orange-county-ice-rink-where-nathan-chen-and-other-olympians-trained/ar-AATJCGz

Interesting, but not a very effective facility for training swimmers. Practicing starts would be particularly hazardous.

It existed. It was built in Boca Raton in 1985 and modeled after Mission Viejo. The whole thing was built to create the best facility on the planet for swimmers and divers to give them everything they needed to succeed. They had two 50-meter pools, a 25-yard pool, another 25-yard pool specifically for diving with 1/3/5/7.5/10 meter towers and all the springboards plus a spa, a huge indoor space with two state-of-the art weight rooms, a sport science lab with a flume, permanent stadium seating for 4500, VIP and press boxes, a 600-foot scoreboard.. you name it, they had it. They lured Schubert and Ron O’Brien to coach there, hosted international and national competitions, and it wasn’t enough. It was… Read more »

In season you would think MA should have the edge. Not sure where he is at with his training.

Remember, he is building up his training base 😉